AMA Pro Flat Track Set to Return to The Copper State for Arizona Mile in Phoenix on Saturday, May 14 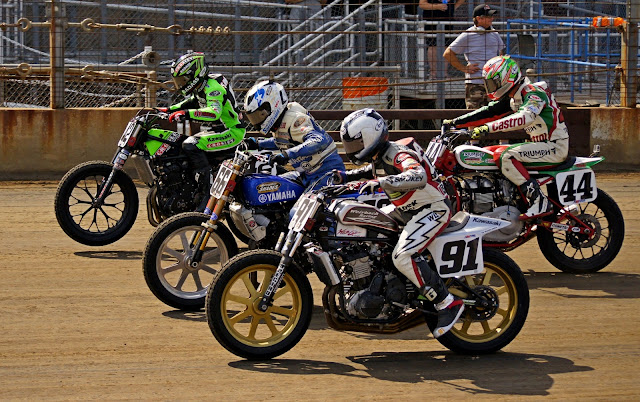 AMA Pro Flat Track announced this week the official information about the upcoming Arizona Mile in Phoenix on Saturday, May 14, which saw tickets go on sale yesterday for what will be the series first return to The Copper State since the 2012 season. In what is being called a 'twilight race' the event will see heat races starting at 3 PM MT. The event will be held at long standing horse track facility Turf Paradise.

Arizona has hosted several events in the last several seasons dating back to the 2010 racing year, which saw two mile events held in Prescott (Joe Kopp/May winner, Jake Johnson/October winner) and Tucson hosting a half-mile event in October 2012 (Stevie Bonsey), but this will be the first return to the Phoenix area in 30 years in the days of the Camel Pro Series.

In the shot above, riders roar off the line in heat race #2 during round 11 of the 2015 AMA Pro Flat Track Grand National Championship Harley-Davidson GNC1 presented by Vance & Hines series at the Springfield Mile II on September 6.

With just 19 days until the season gets set to kick off at Daytona Beach in the annual short track doubleheader event, it's getting close to go time for the teams, riders and sponsors in The Rolling Thunder Show to hit the track and wow all of those on hand, and the return of racing to Arizona in May should make for another great event on the series calendar this year.

You can check out all of the particulars below thanks to the press release from AMA Pro Racing.