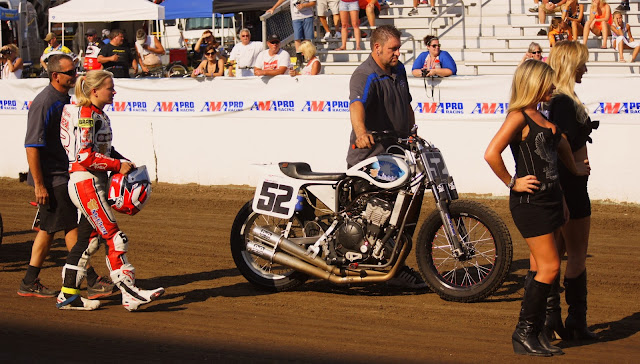 A new sponsor and partnership with AMA Pro Flat Track was announced this week when Ohio-based McElroy Packaging jumped on board to sponsor a new 'Lucky 13' Award for the 2016 AMA Pro Flat Track Grand National Championship Harley-Davidson GNC1 presented by Vance & Hines series. The new award will be pay a $1K bonus to the leader of the 13th lap in each of the season's 15 events this year.

McElroy has been associated with The Rolling Thunder Show for several years now, having served as associate sponsors to the brother and sister team of Cory and Shayna Texter, so they are no 'newbe' to the greatest racing series on two wheels in the world.

In the shot above, Shayna Texter and the #52 Richie Morris Racing/McElroy Packaging/Sportbike Track Time-sponsored Kawasaki team await their turn during the rider intros part of the program during round 11 of the 2015 AMA Pro Flat Track Grand National Championship Harley-Davidson GNC1 presented by Vance & Hines series at the Springfield Mile II on September 6. (Note the presence of McElroy Packaging as one of Shayna's main sponsors on the side of the gas tank on her immaculately prepared Kawasaki.)

This is great news to hear of another sponsorship partnership coming on board with the season now less then two weeks off as the Daytona Short Track doubleheader kicks off on Thursday, March 10!

Check out the full press release below that fully outlines the particulars of McElroy's inclusion in the new season ahead below thanks to AMA Pro Flat Track.