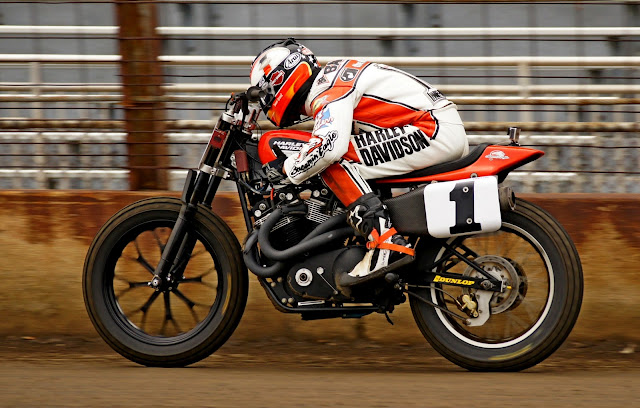 Great news out of Daytona Beach this week comes from AMA Pro Racing in the form of renewed sponsorship contingency and bonus monies being put up again by the Harley-Davidson Motor Company out of Milwaukee, Wisconsin. Long associated with the series' Rolling Thunder Show, the renewed support for the greatest racing show on two wheels in the world is a great added sign for the series fans, riders, teams and sponsors.

In the shot above, Brad Baker on the #1 Harley-Davidson Motor Co/Screamin' Eagle Racing Parts/Dunlop-sponsored factory H-D XR750 tucks in on the front straight during one of the qualifying sessions at round 9 of the 2014 AMA Pro Flat Track Grand National Championship season at the Springfield Mile II on August 31.

With renewed efforts forthcoming from H-D and the changes ahead for The Rolling Thunder Show out of the home offices in Daytona Beach, the 2016 season which is getting set to fire up in Daytona in just 27 days looks to be even more fast and exciting for everyone involved. Everyone should be very excited as things ramp up as the season ahead approaches and takes the green flag on March 10.

Check out the official release below from AMA Pro Flat Track to read all of the particulars for the just-announced contingencies and sponsorship from the great folks at Harley-Davidson.