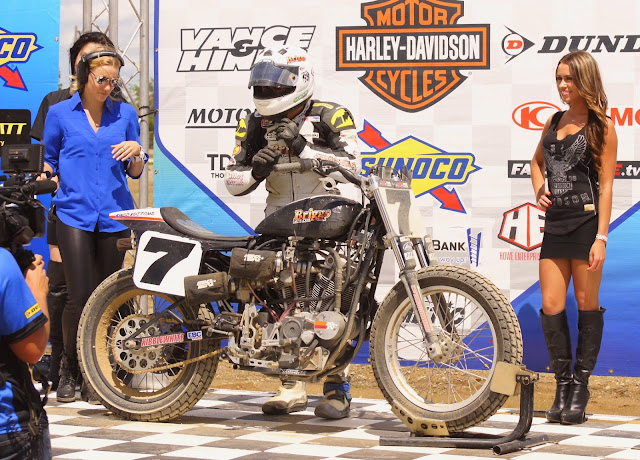 Several announcements out of Daytona Beach this week include two sponsorships that will lend a big hand to the AMA Pro Flat Track Grand National Championship. Sunoco, the official fuel of AMA Pro Racing, will be again returning to The Rolling Thunder Show in what will be it's eighth season and will again be sponsoring the 'Go the Distance Award' for both the GNC1 and GNC2 classes. And in a new partnership for this year, Ohlins USA suspension will be coming aboard as sponsors of the 'Fastest Lap Award' in the GNC1 class.

In the shot above, Sammy Halbert removes his helmet as he gets ready to speak to the crowd along with AMA Pro Flat Track announcer Dani Medin on the podium at the Lima Half-Mile after taking the #7 Briggs Auto/Martin Trucking/Lucas Oil-sponsored H-D XR750 to the win in heat race #2 during round 5 of the 2015 AMA Pro Flat Track Grand National Championship Harley-Davidson GNC1 presented by Vance & Hines series at the Allen County Fairgrounds on June 28.

This was a busy week for announcements for AMA Pro Flat Track, and these two were just the first of several out of the home offices of the DMG-officiated series. You can check out the full particulars of each of these below as we get ready for the action to fire up in Daytona Beach in just five short days.