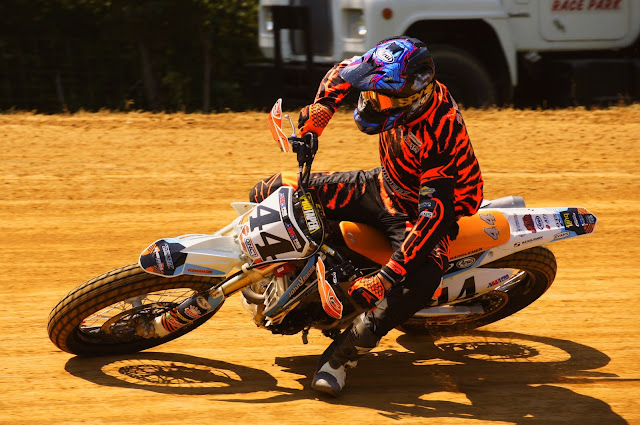 Brandon Robinson left rounds 1 & 2 of the 2016 AMA Pro Flat Track Grand National Championship Harley-Davidson GNC1 presented by Vance & Hines series in Daytona with a firm hold on 3rd-place in the overall championship standings after wrapping up a solid 2-6 finish in both races at the Daytona Beach stadium season opener.

With Thursday night's winner Sammy Halbert leading the standings with 40 points and Friday night's winner Jake Johnson close behind in 2nd-place with 37 points, BRob44 is in good company another five points back with the next event in Austin, TX. in just three short weeks on Saturday, April 9.

In the shot above, Robinson puts his #44 TJ Burnett Farms/John Y Racing/Armbruster Racing-sponsored Honda CRF450R through it's paces during qualifying for the Peoria TT during round 10 of the 2015 AMA Pro Flat Track Grand National Championship Harley-Davidson GNC1 presented by Vance & Hines series in Thunder Valley on August 16.

Robinson was also rewarded with a fine effort in both rounds of the Steve Nace AMA All-Star National Flat Track Series in Savannah, GA. and Barberville, FL. to kick off his new season with his new team, Jerry Kennedy Racing. BRob44 will be racing XR750s and Kawasakis this season after spending last year riding for the Latus Motorsports Triumph team, getting him back on more familiar equipment in the Kawasakis with which he won the double on back in 2013 while riding for the TJ Burnett Farms Kawasaki squad. He also will have the benefit of reteaming with one of the finest tuners in the business in Brent Armbruster, so their second year together should prove very rewarding.

Check out BRob's official race report below and keep an eye out for the Pennsylvania resident this year as he should be a force to be reckoned with in the fight for the championship. Congrats to Brandon and the team for a great start to the season and the best of luck for this year as the season progresses!

Well another Daytona Bike Week has come & gone. Seems like every year it goes by faster & faster, but as always it was a blast!
I left a week earlier than normal this year to go meet up with my tuner, Brent Armbruster, up in Michigan to help get everything finished up & loaded. First stop on the Kennedy Racing trip was Savannah, and boy do I love Savannah! It is my absolute favorite track so it's always good to do some testing & kick off the new season there.
On to race day, had a hard fought battle in the Singles main with Mees & Baker, which saw each of us take turns at the lead. Ended up with a very close 3rd in that one.  Felt like I let the Singles win slip through my fingers so I went out for the Twins main with a plan for some redemption.
Got a great start & took the lead coming off turn two where I never looked back! Ended up winning the Twins main by darn near a straightaway! It was a huge confidence booster & a perfect way to start off the new season with my new team. Let's just say the guys were pretty stoked!
The next event we planned on was the All-Star National at Barberville. A bunch of guys tend to skip this race because of how the track has been in the past, but Steve Nace did a great job with the track prep and gave us a good track to race on.
For some reason all day I was just a tick off & felt like I was struggling. It was one of those days where every time I got a good start the race would get red flagged, then on the restart well, yup you guessed it, I would suck it up & have to work my way from behind. Anyways I ended up with a 4th in the Singles class & a solid 3rd in the Twins. Not a bad day, but not what I was looking for.
We had a day off before we did a little bit of testing on the Singles to prepare for Daytona where we actually bounced around to a couple different tracks. It was kinda nice to get a bunch of laps in & try some new things. The next day Brent cleaned up all the bikes & well I took advantage of the warm weather and goofed off on my Jamis bicycle for a while!
All the preparation & hard work was about to be put to the test at the first National of the year, the Daytona short track! Unlike most riders on the circuit, I absolutely love Daytona. I love how challenging this track is & the fact that I got my first Grand National win there don't hurt either!
Qualifying on day one went pretty good where we ended up 5th overall. I ended up 2nd in my heat to Johnny Lewis. Brent made a couple small changes to the bike as the track was starting to get really rough. We made the right changes for sure as I was able to move my way up to 2nd pretty quick in the opening laps of the main. From there I played a game of cat & mouse with Sammy Halbert, where I just never got close enough to do anything with him. With a couple laps to go I just settled in and brought the Kennedy Racing/Armbruster Racing/TJ Burnett Farms Honda 450 home in 2nd-place!  It was a great feeling getting back on the box, feels like its been forever!
The cool thing about Daytona is we get the chance to do it all over again the next day. Day two in qualifying didn't go quite as smooth. Felt a tad off all day as the track was a bit different than normal. I ended up going down in the last session, which happened to be the faster session so I ended up a dismal 21st overall. I wasn't too worried as I knew we were a lot better than that & when it comes to racing I seem to always step it up a bit.
I was on the second row for my heat race, but with an aggressive first couple laps I was able to work my way up to a 3rd-place finish & a direct transfer to the main. In the main I got probably the most gnarly start of my life where I was like 4th getting into turn one from the second row! Not sure how in the world I pulled that one off haha, but I sure liked it.
Unfortunately I wasn't able to capitalize on that great start & I faded just a tad to an eventual 6th-place finish. I was pretty disappointed with myself as that is the worst I've finished in Daytona in the past four years. The track was definitely different though, something we have never seen where you could ride much higher than the normal bottom feeder line.  It was pretty greasy, but everyone has the same track so no excuses.
Overall we had a great bike week & leaving Daytona 3rd overall in the AMA Pro Flat Track Grand National Championship isn't a bad way to start the year!
Big thanks to my crew; Jerry, Brent, Lee, & TJ, all of our sponsors, fans, & my family for coming out to support me!  I appreciate it all, until next time, see y'all in Texas!