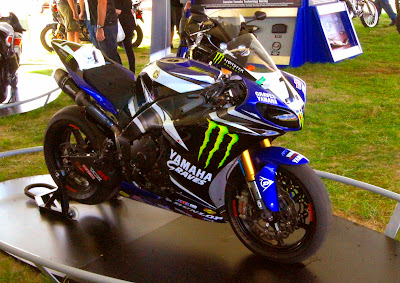 3-Time AMA Superbike Champion Josh Hayes' #1 Monster Energy Graves Motorsports Yamaha YZF-R1 sits on display under the Yamaha tent during the 5th Annual Red Bull Indianapolis Moto GP Weekend in August 2012.  Hayes, who broke the single season record for wins in defending his AMA Superbike title, is expected to return to the team for the 2013 season alongside Rookie of the Year team mate Josh Herrin to lead the squad again on their assault on the 2013 AMA Pro National Guard Superbike Championship.

Geico Motorcycle AMA Pro Road Racing announced several confirmed dates for the 2013 season, which will see returning favorites and fan favorites Road America, Mid-Ohio, Barber Motorsports Park and a return to Indianapolis for the third season in-a-row for the AMA Pro Vance & Hines XR1200 Series as the undercard to the 6th Annual Red Bull Indy MotoGP in August.  Daytona will again kick off the season in March.

You can start making your reservations and getting your hotel or camping arrangements together with this release of the confirmed dates on the calendar thanks to the press release below from AMA Pro Road Racing.


DAYTONA BEACH, Fla. (November 9, 2012) - AMA Pro Racing is pleased to announce nine confirmed events on the 2013 GEICO Motorcycle AMA Pro Road Racing schedule. In addition to the events listed below, AMA Pro Racing will make announcements on the remaining events in the near future.

Daytona International Speedway will once again play host to the GEICO Motorcycle AMA Pro Road Racing opener as the series kicks off the 2013 season with the historic DAYTONA® 200; a standalone endurance spectacular for the star-studded lineup of the GoPro Daytona SportBike division. The opening event will be bolstered by the full complement of GEICO Motorcycle AMA Pro Road Racing classes and is scheduled for March 14-16, 2013. The 72nd running of the historic 200-mile DAYTONA® 200 is set to go green on Saturday afternoon, March 16.

Race fans in the Midwest will be happy to know that the series will be heading back to Road America in Elkhart Lake, Wis., on the weekend of May 31-June 2, 2013. Measuring in at just over four miles and the longest circuit on the schedule, the classic track is sure to size up the competition as the summer season begins to kick in across the nation.


Fans in the Southeast will be pleased to know that the series will be returning to Barber Motorsports Park in Birmingham, Ala. for an event scheduled on the weekend of June 21-23, 2013. As if the racing action isn't enough, the historic venue is also home to the Barber Vintage Motorsports Museum which contains over 750 vintage and modern motorcycles for avid race fans to take in over the course of the weekend.


Mid-Ohio Sports Car Course has been a well-deserved mainstay on the American road racing scene since 1962, and the legendary asphalt has seen some of the most exciting road racing action in the country. The weekend of July 12-14, 2013 does not intend to be the exception as the series heads back to Lexington, Ohio for the 31st time to take on the 2.4-mile, 15-turn natural terrain road course for another set of exciting shootouts.


National Guard SuperBike, GoPro Daytona SportBike and Motorycycle-Superstore.com SuperSport will then head west to be featured alongside MotoGP as part of the Red Bull U.S. Grand Prix at Mazda Raceway Laguna Seca. The international event at the 2.238-mile natural road course in Monterey, Ca. is scheduled for the weekend of July 19-21, 2013.


GEICO Motorcycle AMA Pro Road Racing will return to Miller Motorsports Park for a standalone, full-featured event on August 2-4, 2013. For the first time since the picturesque track was built in Tooele, Utah, fans will get to take in the excitement of the doubleheader race weekend.


It wouldn't be a complete season without the AMA Pro Vance & Hines Harley-Davidson Series heading up to Indianapolis Motor Speedway for their stand-alone event alongside MotoGP at the Red Bull Indianapolis GP. The big-bored twins will hit the bricks on August 16-18, 2013, intending to provide some of the most intense racing seen in the great state of Indiana.


Next up on September 13-15, 2013, riders and fans alike will be thrilled as the series heads back to New Jersey Motorsports Park for the fifth consecutive season. The 2.25-mile track in Millville, N.J. has been a battlefield for competitors since the gorgeous grounds were opened in 2009. In 2013, seven-time NJMP winner Josh Hayes will likely be excited at the prospect of once again building up his collection of New Jersey gold.

Additional events or Official Series Tests will be added to the 2013 GEICO Motorcycle AMA Pro Road Racing schedule. AMA Pro Racing will release details on any additional events as soon as they are available.