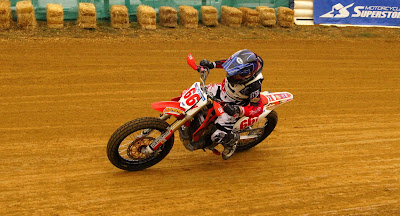 Californian Dominic Collindres had just signed-on to ride for the team just days before the event that would begin the second-half stretch of the season in the Pro Singles series, and he brought a renewed shot-in-the-a.. to the defending championship-winning Iowa-based effort.

Right out of the box on the #66Y Weirbach Racing/General Engineering/Barnett/Spectro-sponsored Honda their new rider showed that he was in control and that the team's decision to sign him for the remaining events for the year was a wise one.

Collindres, in charge at the front right from the start, took his first-ever win over a stacked field of riders vying for the Pro Singles Championship, including eventual series champ Stephen Vanderkuur (3rd-place finish) and part-time Pro Singles contender Justin Reed (2nd-place finish) and wowwed the paying crowd at the longest tenured event on the AMA Pro Flat Track calendar.

In the shot above, Collindres walks away from the rest of the field after a red flag delay at the Pro Singles round in Peoria on August 12 as he comes out of turn one. 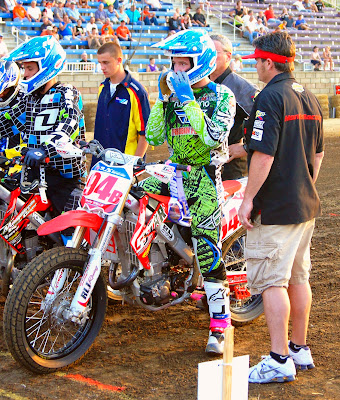 Team co-owner Ted Weirbach stands with Weirbach Racing's former signee, Ryan Wells, just before the start of heat race action at round 3 of the 2012 AMA Pro Motorcycle-Superstore.com Pro Singles Championship season at the Springfield TT on May 26.  Wells, on the #94B Weirbach Racing/General Engineering/Barnett/Spectro-backed Honda CRF450R (the weapon of choice and dominance in the Pro Singles series and for the Weirbach team), parted ways with the team just prior to round 9 at Peoria.

After winning round 2 at Daytona (having missed the cut the previous evening in the season kick-off doubleheader round), Wells only scored one more podium finish for the Iowa-based Weirbach team (3rd-place Hagerstown) and three more top-10s.

Unfortunately, the former Horizon Award winner was injured in a heat race crash at round 12 of the season at the Springfield Short Track and wasn't able to continue the remaining events of the season.  He still finished 7th in the 2012 AMA Pro Motorcycle-Superstore.com Pro Singles Championship based on his early-season results while still on the immaculately-prepped Weirbach Hondas, and is expected to return healthy again for the 2013 season. 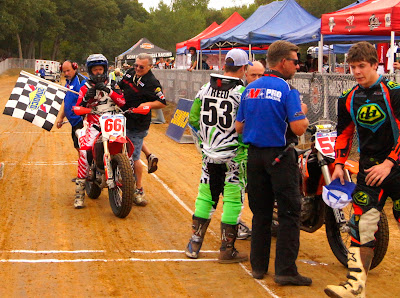 Team co-owner Richard Weirbach hops off of the back of team rider Dominic Collindres' #66Y Honda CRF450R after taking the spoils of victory lap with the California rider at round 9 of the 2012 AMA Pro Motorcycle-Superstore.com Pro Singles Championship season at the Peoria TT.  3rd-place finisher Justin Reed #53L and 2nd-place finisher Stephen Vanderkuur #10J talk and head to the podium after the 12-lap main.  Vanderkuur went on to claim the 2012 Pro Singles Championship while Collindres wound up in the 4th-place spot in his first-full season in the series.

Poised to return together again for the full 2013 AMA Pro Motorcycle-Superstore.com Pro Singles Championship season, Collindres and the Weirbach Racing team are assuredly a safe-bet to contest for the big brass ring next year in the hotly-contested class that showcases some of the best racing on wheels in the world that is AMA Pro Flat Track racing.  It's gonna be a long winter......

Check out the official press release below courtesy of Dominic Collindres and the Weirbach Racing team, and a big congrats to them for a stellar finish to the season.  Bravo!

The AMA Grand National season-finale was held in Pomona, California.  I was stoked for this race being that it was close to home and I got to hang out with friends and family at my house all week.
Last year I didn't do so good, not even making the main, but this year I felt that I had some good experience gathered up from this year.  My goal for the weekend was to finish ahead of Shayna Texter and finish the year off fourth in overall points.

Dominic Collidres gives team owner Richard Weirbach a victory ride on the #66Y Weirbach Racing Honda CRF450R after winning his first-ever event and first with his new team at round 9 of the 2012 AMA Pro Motorcycle-Superstore.com Pro Singles season at the Peoria TT on August 12. Photo courtesy of the Weirbach Racing team.


For the heat race I was lined up on the front row.  I got a great start and was in second into the first turn.  I made a pass for the lead going down the back straight and led the rest of the heat race.  I felt great in the heat, winning by about a second.  Vanderkuur looked fast in his heat and I knew he was going to be tough to beat.
Going out for the main I felt comfortable with the way things were going.  I got the holeshot and going into turn three a red flag came out.  On the second start I was in about fourth riding by myself and another red flag came out about halfway through the race.
This time the start was single file and I made my way into third going into turn three.  The top two riders pulled a large lead on me and we were all evenly spaced.  At about four laps to go I found a fast line and reeled in Maquire who was in second.  I passed him and was left with two laps to go.  I caught up to Vanderkuur on the last lap and couldn't quite get into the draft going down the last straight away and I finished a solid second. 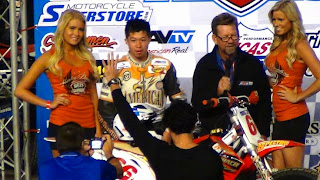 With a stellar 2nd-place finish in round 16 of the 2012 AMA Pro Motorcycle-Superstore.com Pro Singles Championship, Weirbach Racing's Dominic Collindres #66Y capped off the season in the 4th-place spot in the championship standings.  Photo courtesy of the Weirbach Racing team.

This year Pomona treated me great.  Being on a totally different bike and having so much more experience really seemed to help me out.  I am very happy with the way this year went.  I couldn't be happier to get team Weirbach a win my first race after their previous rider decided to go on his own mid-season.
Getting all of my podiums on Weirbach's bikes gets me ready for next year.  Being that I missed five races and joined Dick and Ted halfway through the season and finished fourth in points, Dick, Ted and I feel like we have a good shot at winning the championship next year since I will be at every race. 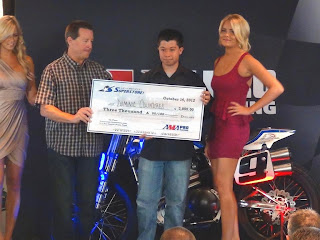 Dominic Collindres accepts his 4th-place check in the AMA Pro Motorcycle-Superstore.com Pro Singles Championship for the 2012 season at the AMA Pro Flat Track banquet in Pomona on October 14, 2012.  Photo courtesy of the Weirbach Racing team.
I couldn't have done it without them and all our sponsors that helped this year. I would like to give a huge thanks to: 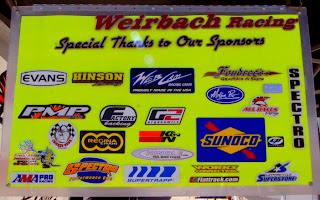