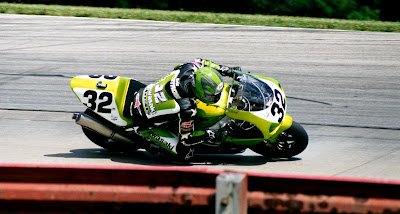 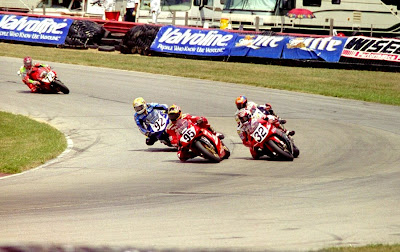 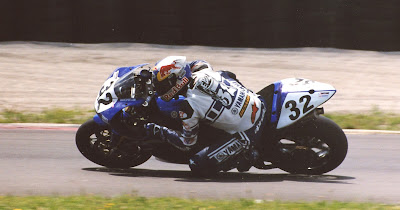 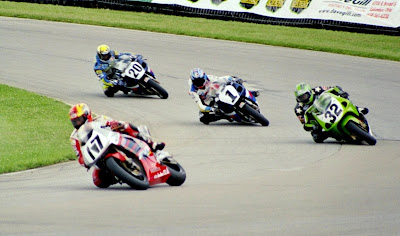 Miguel Duhamel on the #17 American Honda RC51 leads Eric Bostrom on the #32 Team Kawasaki ZX-7, Mat Mladin on the #1 Yoshimura Suzuki GSX-R750 and his team mate, and eventual dual-weekend winner Aaron Yates on the #20 Yosh Suzuki GSX-R750. Bostrom would win several of his 15 superbike/premier class wins while running for Team Green, including a round at Road America and one at Mid Ohip in '02. This was going through the carousel at Mid Ohio during AMA Superbike race two action in the summer of 2000, Eric's first year with Kaw. Other then Mad Mat, Eric was the most dominant of superbike racers in this span, garnering two runner-up spots in the championship behind Mat in '01 and behind Nicky Hayden in '02.
-------------------------------------------------------------------------------------------------
Great news was rumored over the weekend, and then confirmed the first of this week that Eric Bostrom, the youngest of the Boz Brothers racing duo, would be returning to AMA Superbike Series action for several events later this year. Partnering with Cycle World, Yoshimura Suzuki and Attack Performance, E-Boz will be returning to the track in late July at Laguna Seca, and also competing in rounds at VIR in August and the season-ender at Barber in late September.
After 'retiring' at the end of the 2008 season to work the property in Brazil that he and his brother had purchased, E-Boz all but dissappeared off the racing radar while working in South America.
The timing must have been right, and maybe the former two-time premier class runner-up and the '01 AMA 600 Supersport Champion felt that way as well. With the new rules in the class that were established for the '09 season, and coupled with the loss of 7-time champ Mat Mladin to retirement and 3-time champ Ben Spies now off to MotoGP, the racing has gotten much closer throughout the class and parity is certainly the norm now. Other then the fact the class is still filled with Suzuki's, there are a number of stout teams and racers that could win on any given day. With E-Boz back in the mix, and if he is up to par after having been away for the better part of two years from active competition, you should be able to throw his name in the mix as well.
Highly missed by the fans, it will be good to see E-Boz back in action again and thrilling us all with his riding prowess. We will be watching and rooting for Eric and looking forward to seeing him back in the AMA series where he belongs!
We wish Eric the best of luck and can't wait to see him put it on the box with this new effort. Hopefully it works out good enough to put him on a full time ride for the 2011 season. Fingers crossed! And go get 'em man!
-------------------------------------------------------------------------------------------------

Here's the official press release as posted over at RoadRacingWorld.com that comes from the Attack Performance folks who will be involved with Eric's homecoming party along with Yoshimura Suzuki, Cycle World, Leo Vince and others. Read and right on:
http://www.roadracingworld.com/news/article/?article=40290