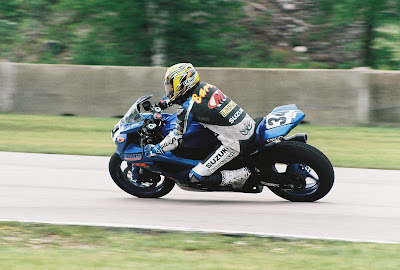 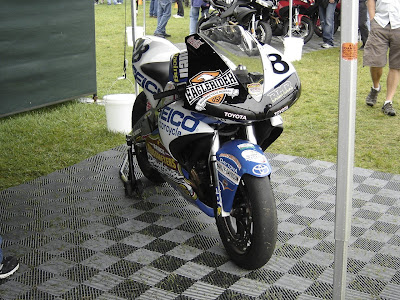 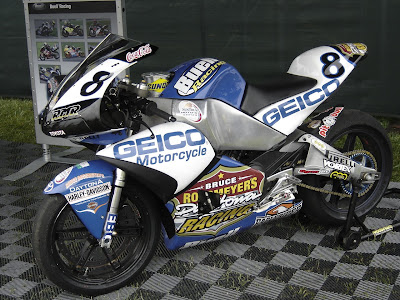 While over the w/e Danny Eslick romped the field in
both of the Fontana AMA Daytona Sportbike races, the
talk around the internet--and I am sure at the races as
well--has been the 'extra displacement' that the Buell
has been allowed compared to the 600cc inline-fours. As
a result of all this consternation, one--or two--things have been
overlooked.
One of those is the talents of Danny Eslick. While all the
nay-sayers seem to focus on the 1125cc +/- that the Buell
is allowed, the fact still remains even a sled has to have a great
rider. Not taking away anything from any of the other great
riders that have been running the class this year.
And the second, for sure, is the motorcycle. And I am here to present you
with some shots of the Bruce Rossmeyer/Richie Morris Racing-Geico sponsored
Buell. Now of course as these shots were taken in September 2008 at the
Indy MotoGP race, the make-up of the bike is most certainly different per the
difference in class rules from last to this year. And the paint job is definitely
a lot brighter and more eye-appealing overall. Just my opinion mind you.
But nonetheless, you get the idea of what the machine is like and looks like
that is setting the world-or at least the AMA Pro Racing Daytona
Sportbike-class world, on fire. And those like myself, and many of you,
who still follow it in spite of the way that the DMG group
has managed to put it on it's head.
There is also a link that I wanted to add to these shots as well, that the good people
over at http://www.roadracerx.com/ ran a story on the team today. And it is a VERY good
article with the outlook of the genius behind the bike on what his and their perceptions
are to all of the bruhaha---did I spell that right??---that has transformed this wonderful
world of U.S. or AMA Road Racing into a very intense discussion no matter the side you
chose to stand on. Mr. Morris also talks about their other rider, Michael Barnes, who has
been racing motorcycles on at least this continent for at least as long as I can remember it.
The guy has an intense enthusiasm about racing and can also ride just about darned anything,
and has, on two wheels. I posted the shot of Mr. Barnes on #34 M4 Suzuki GSXR-600 that
I took of him last year at Road America. This was during the rain practice on Friday that
w/e and back in turn 10. Also the same corner I shot the pic of Danny Eslick from the w/e
post. Here is the link to that story:
http://www.roadracerx.com/features/between-the-races/between-the-races-richie-morris/
....and another.....
http://www.roadracerx.com/features/tuesday-conversation/tuesday-conversation-michael-barnes/
So no matter which side you choose on the size of the displacement versus the amount of
cylinders you are allowed or the make of the motorcycle that you will be allowed to run in
any given class as designed, you at least have to take the time to enjoy and respect those
that can and will find the way to win. Be it the immense talents of Mr.'s Eslick, Barnes, and
Morris at this moment in time, or be it the lines between the rule book, the fact still remains
it all has to fit together perfectly before it becomes a true and complete puzzle.
Posted by Stuman714 in Indy at 8:35 PM