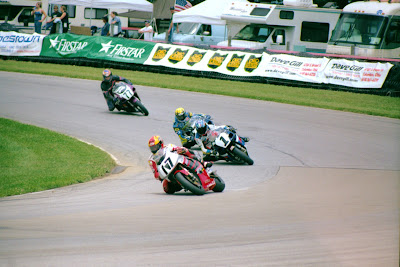 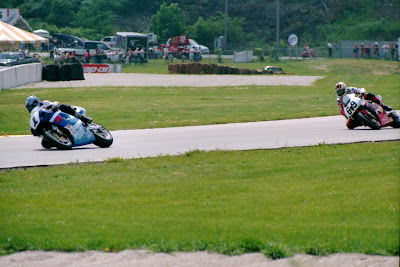 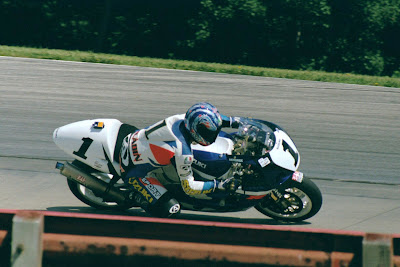 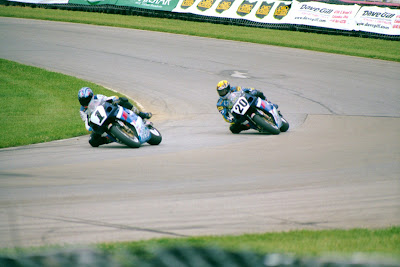 As we view various shots above from the 2000 AMA Superbike
Series from beautiful Road America in Elkhart Lake, WI., and the
wonderful Mid-Ohio in Lexington, OH., we get word from the far
reaches of the internet, that Mat Mladin, the 6-time AMA Superbike
Champion, and the Yoshimura Rockstar Makita Suzuki GSXR-1000 have
added another Superbike win to his now total of 76. And with another race
tomorrow afternoon, his win total is likely to be 77 before everyone tucks themselves
in after the w/e. And not to mention, as well, that the Yoshimura Suzuki team has now
won 50 Superbike races in a row. Yes. I did say in a row. And I'm not positive on the
exact number, but I'm pretty sure Mat is responsible for about 32 or 33 of those. Since
the summer of 2006. I mentioned in one of my last posts not to make this guy mad. But
I think it's too late. 'Mad' Mat is on a roll and there appears to be no one at the present who
can prevent that.
The above shots were all taken during the 2000 series season.
The various shots from Mid-O and Road Am are of Mat on the #1 Yoshimura
Suzuki GSXR-750--before they changed the series to a full liter-bike class--
as well as his team mate and former Superstock and Supersport
Champion as well as multiple Superbike race winner, #20 Aaron Yates. Nicky Hayden, the former Supersport and Formula Extreme and '02 Superbike Champion, and '06 MotoGP
World Champion, on his #69 Team Honda RC-51, as well as his team mate, '95 Superbike Champion, 5-time winner of the Daytona 200, multiple-time Supersport Champion and
race winner, Miguel Duhamel, on his #17 RC-51 Honda.
But this w/e, and without a doubt for sure after 4 races and half-way into 3 events of the
2009 AMA Pro Racing Series, Mat Mladin is making this year about him. And I see
many more of these wins this year with the roll he has going and the point he is out to
make this year. We have definitely not heard the last of 'Mad Mat' this year--or beyond for
all we know at this point--and personally I'm looking forward to him handing their as..es to
them on a platter. Or for that matter on a Yoshimura Suzuki GSXR-1000 AMA-spec
Superbike. This is gonna be fun!
Enjoy the shots and enjoy the wonderful spring weather we are having in Indy today!