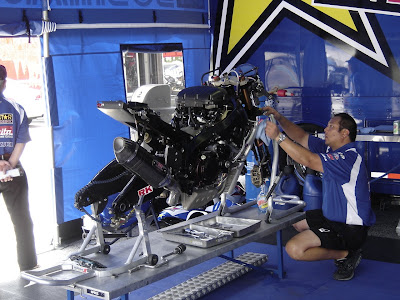 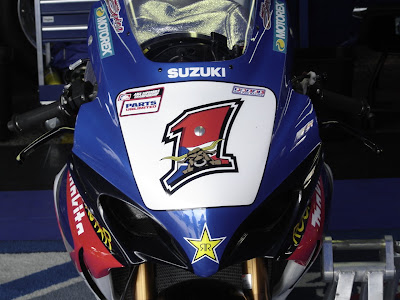 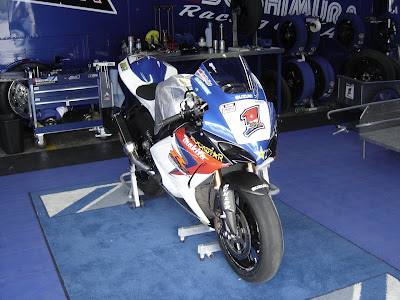 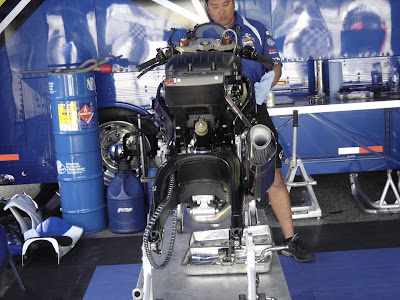 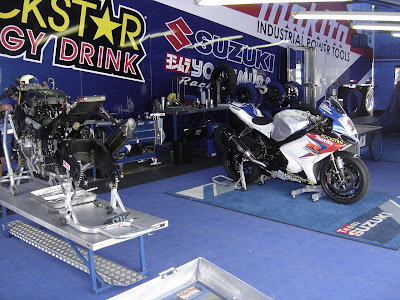 As you view the shots above of Mr. Ben Spies 3rd Championship
winning Suzuki in various stages of dress, the updates from across
the pond as he takes his assault to the World Superbike stage are
good and bad.
We'll start with the bad as it occurred in race one at Valencia this last
w/e, as Ben crashed chasing Nori Haga on the Xerox Ducati. Thankfully
it was only a high speed wash out, but the bike appeared to suffer fairly
severe damage from the endo it took into the kitty litter. He did, however,
get right up without appearing to have suffered any serious damage to his
body, and 3 1/2 hours later jumped on his back-up bike, and pulled off a
very valiant effort for 2nd behind Mr. Haga again. While scoring zero points
for the first leg, he grabbed a solid 20 for his second place effort to come out of
the w/e only 40 down from Nori after 3 events and 6 races. We still have 11 events
and 22 races to go and I guarantee we will see MUCH more of Mr. Spies on the box,
and most probably on the top at that. And did I fail to mention he did take Superpole
again for the w/e. Sure, it doesn't pay any points, but after 3 events, and 3 Superpoles
under his belt on tracks he has at best barely seen, well, you can do the math.
Good luck, Ben, we're all behind you and amped up you are doing such a super job.
We'll be following your exploits throughout the season and looking forward to more!
And you can follow all of his exploits through all of the links and feeds on the left-side
column. You won't be disappointed!
All of the shots above I took at Road America in June of '08 in the Yosh camp in the
paddock area. One of the most sanitary looking operations you will see anywhere in
this series, if not in the world. Between Ben and Mat Mladin, they have won 9 championships
since 1999 in the AMA Road Racing Series. That's 9 Superbike Championships, the grand
daddy of the best. Not too mention their current race winning streak of 51 races and
you start to realize you are looking at not only mastery, but history as well. Enjoy their
wares above. They are built for the gods of the series, and they are the gods of
machinery on two wheels.
Posted by Stuman714 in Indy at 8:42 PM