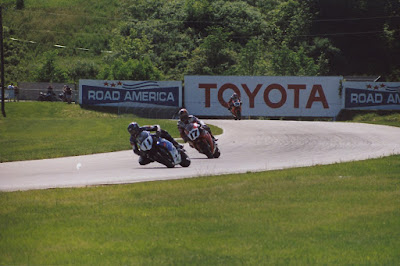 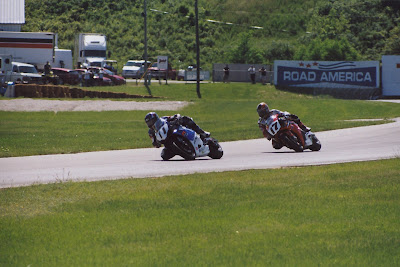 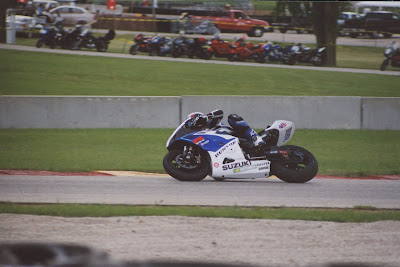 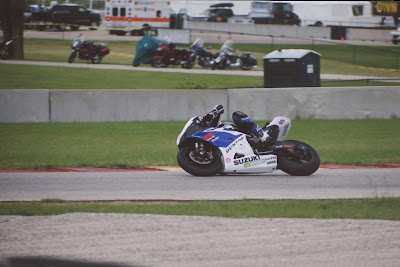 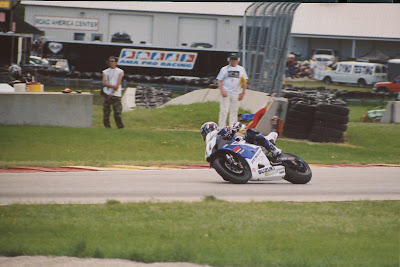 As we view some various shots of Ben Spies at Road America in
June of '06--the early part of the year when he won his 1st AMA
Superbike Championship--word comes from across the pond that
Ben Spies not only led all sessions of practice and qualifying this w/e
at Assen, but also managed to take his 4th event Superpole of the year.
And this on a track that before Thursday he had never seen in person.
Great stuff from the Tall Texan who the world is getting to know why he
is called 'Elbows,' as these shots will indeed reinforce. To view the results of
the races in the World Superbike Championship, take a look here:
http://www.worldsbk.com/en/season.html
You can also click on their 'home' page tag to take you to the live timing which
is available during the events of the weekend. The races for Sunday, April 26th
are due to roll off at 0600 EDT and 0930 EDT. Unfortunately, due to licensing
restrictions, the live feed available to other parts of the world are not to us here in
the U.S. But..........they are on tape-delayed on Sunday 4/26 on SpeedTV at 3 and 4
P.M. ET. And for you night owls repeated on Tuesday 4/28 at 0300 and 0400 ET.
So stay tuned as Mr. Spies highlights and shows his talent to the rest of the world for
part 4 of the 14 part World Superbike Series of 2009. You will not be dissapointed in
watching what this very talented young man can do!
The above shots were taken as mentioned at Road America--all of them in turn 14 before or
in mid-corner which leads onto the 3700 foot front stretch in Elkhart Lake, WI. The first two
shots you see Ben leading Miguel Duhamel on the #17 Team Honda CBR1000RR. In the first
shot you will also see multi-time AMA FX Champion Jake Zemke on the #98 Team Honda
CBR1000RR trying to keep them within sight. These two were taken during race 2 on Sunday
afternoon of the weekend. In the other shots, Mr. Elbows is in various forms of practice or qualifying on Friday and Saturday of the w/e event.
So tune in as we see the Tall Texas Elbows Man take on the world again and show them
what the fine state of Texas, as well as the once-fine AMA Road Racing Series has turned out
in the way of talent. Let the pain begin......
Posted by Stuman714 in Indy at 2:48 PM