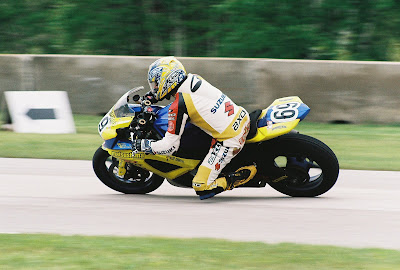 For those of you still following the DMG-operated AMA
Superbike....errrr........Pro Racing Series this year will be
hearing a lot of this name this year. Danny Eslick, aboard
the Richie Morris Racing Harley-based Buell 1125 just
minutes ago won race one at Fontana, CA., in the Daytona
Sportbike class. This is called such since the NasCrash heads
of the DMG-Daytona Motorsports Group-took over running
of our beloved AMA Superbike Series. But that is another story
for another time.

Danny Eslick is the reason for this little post. The above shot of him
was taken at Road America in June '08. He was aboard a Matsushima
Suzuki GSXR-600 at the time, and this was the old existing FX-formula
extreme-class under the old AMA-operated Superbike Series. The class was
for the most part mini-supersports-almost mini-superbikes on steroids.
But Mr. Eslick, who comes from a dirt track background, managed to win
the first Fontana round by over 2.5 seconds. On a Buell no less. Heck, he was
running right up at the front if not leading for the better part of the Daytona 200
until the insides of the Buell trying to run at 160+ on the banks at Daytona rattled
the radiator and fairing brackets loose. But that's another story altogether now as well....

Congrats to Danny Eslick, and to Buell, for being able to put together an impressive run
against some formidable talent. With the shorter races now for the remainder of
the schedule, we probably won't be seeing any other mechanicals because of vibration.
Which is good. This kid has talent and I think with this class structure being what it is
(please see AMA rules at http://www.amaproracing.com/ ) for that list to be better to understand it.
But that being said, keep an eye and ear out for more Danny Eslick sightings.
I'm sure they will be there!
Posted by Stuman714 in Indy at 7:51 PM