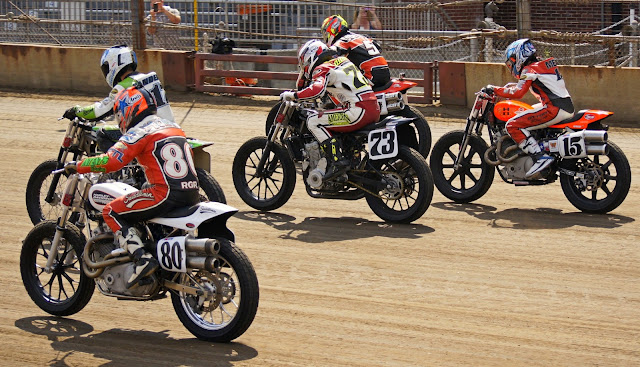 In just over two months time, selected riders from AMA Pro Flat Track will again hold stage alongside the stars of extreme sports when they visit the Circuit of the Americas in Austin, TX for their second outing in the ESPN XGames competition.

This will be the second year alongside the popular competition where the stars of The Rolling Thunder Show put on a great show last year in their inaugural showing that saw Jared Mees lead the majority of the main event only to suffer a mechanical breakdown with less then a half lap to go and Bryan Smith go on to earn the first-ever gold medal in the XGames flat track competition in front of a packed house and with just over 500K people watching live in prime time on ESPN's cable network.

This year the track will have more development before the competition starts up as former 7-Time AMA Grand National Champion Chris Carr has done a total redesign of the facility that will see it's initial testing come next weekend on Saturday, April 9 with the Harley-Davidson Lone Star Half-Mile in round 3 of the season.

In the shot above, the riders in heat #1 roar towards turn one during racing action at the Springfield Mile II at round 12 of the 2015 AMA Pro Flat Track Grand National Championship Harley-Davidson GNC1 presented by Vance & Hines series on September 6.

Check out the preview below from AMA Pro Flat Track and be ready to see the stars of the Grand National Championship head back to Austin next week for the season's third event of the year and it's first Twins Series race of the season and then be ready for their return to the ESPN XGames competition in early June in front of a live television audience and what will surely be another packed house at the COTA facility.