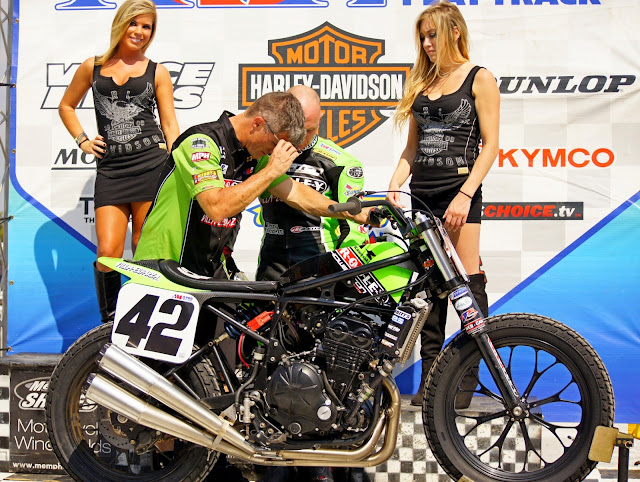 Bryan Smith has owned the Sacramento Mile round of the AMA Pro Flat Track Grand National Championship Harley-Davidson GNC1 presented by Vance & Hines series since his string of wins started during the 2011 season aboard his and his father Barry's Moroney's H-D XR750.

Since that time and with the help of his Howerton Motorsports Kawasaki and main team members Ricky Howerton, Jeff Gordon and Dink Glidden he has all but owned the Cal-Expo event in California and looks to add to his legend on the left coast in just four short weeks as the series heads to round 5 of the 2016 season on Saturday, May 21 just one week after the next round on the calendar and the series newest venue at the Law Tigers Arizona Mile.

Winning five series races in-a-row is a testament to itself for Flyin' Bryan and the team, but to be able to put together a sixth win at the Sacto Mile would be quite a feat!

In the shot above, Smith and team owner Howerton look over the #42 Crosley Brands/Howerton Motorsports/Villa-Esparza-sponsored Kawasaki rocket after taking the win in heat race #2 at the Springfield Mile II during round 11 of the 2015 AMA Pro Flat Track Grand National Championship Harley-Davidson GNC1 presented by Vance & Hines series on September 6. Smith went on to take the win on the day at the Illinois State Fairgrounds to win his second race of the year at Springfield and his fourth mile win of the season.

With the series getting ready to amp up it's schedule in just three short weeks, check out the press release below for all of the info you will need in order to attend what will definitely be a race to be at for the Sacramento Mile on Saturday, May 21. If you are in the area you don't want to miss what will be another great day of racing at the Sacto Mile!


Press release courtesy of SMI Promotions, the promoters of the Sacramento Mile

The Final Countdown: One Month to the 2016 Sacramento Mile


Cal Expo to Host AMA Pro Flat Track Event on May 21
SACRAMENTO, CA (April 21, 2016) – It’s right around the corner – the 51st running of the historic Sacramento Mile on Saturday, May 21, 2016 at Cal Expo, is just one month away. With the race just four weeks away if you haven’t yet secured your tickets for the big event, it’s a good time to call the Toll Free Ticket Line 1-844-SAC-MILE (1-844-722-6453) or visit the event website www.sactomile.com
The big storyline heading into this year’s Sacramento Mile is the efforts of Bryan Smith to extend his record winning streak at the race to six, while the rest of the talented field will be shooting to end Smith’s impressive string of victories.
Sammy Halbert leads the AMA Pro Flat Track Championship standings after the first three rounds of 2016. The series has been highly competitive so far, with three different winners in three nationals.
In the support GNC2 class, Salinas, California’s Andrew Luker scored victory in the most recent round in Austin, Texas.
The Sacramento Mile this year will also feature the Clash of the Titans III, a special exhibition race featuring Motorcycle Hall of Fame and Harley-Davidson racing legends Scott Parker and Jay Springsteen.
The AMA Pro Grand National Championship series is one of the longest running motorcycle racing championships in the world. On the long straights of the Sacramento Mile top speeds can reach 130 miles per hour. Flat track racing has produced many of America’s Motorcycle Grand Prix Champions such as Kenny Roberts, Eddie Lawson, Wayne Rainey, Kenny Roberts, Jr. and Nicky Hayden. Visit www.sactomile.com to keep up with all the latest on the event.
For additional series info visit: www.amaproracing.com/ft
Via Facebook: https://www.facebook.com/SactoMile
Twitter: https://twitter.com/sactomile
YouTube: http://www.youtube.com/user/sactomile
—
*** 2016 Ticket Information: Ticket information is available for the May 21, 2016 Sacramento Mile at www.sactomile.com.
Fans can order tickets online at http://www.sactomile.com/tickets, or by calling 1-844 SAC MILE (1-844- 722-6453).
--
Media Contact:
Larry Lawrence
(317) 332-3899
lawrencemedia@hotmail.com