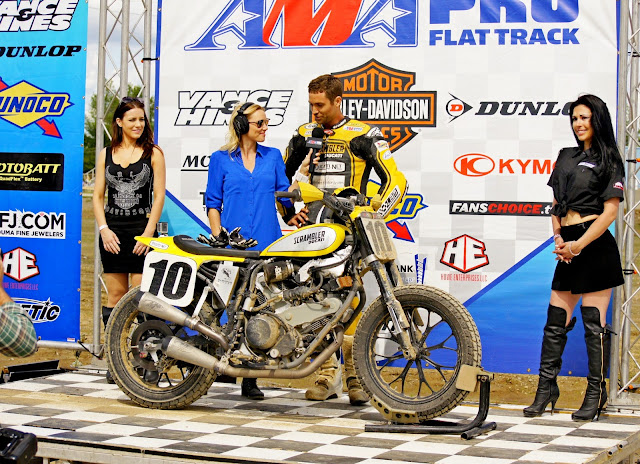 The Lloyd Brothers Motorsports team, who set the bar for diversity on the track and for looking sharp in the pits in the AMA Pro Flat Track Grand National Championship, announced this week that they will be reteaming with last year's rider Johnny Lewis for select Twins Series races for the 2016 season.

The team, based out of the Columbus, OH. and Atlanta, GA. areas had a rough year last year with crashes to riders Troy Bayliss and Johnny Lewis. Bayliss, the former 3-Time World Superbike Champion was lost to the team for the season after crashing out in their initial outing at the Springfield Mile I in late May. Lewis, who finished the season in the 16th-place spot in the championship standings, had some great finishes on the year (4th-place/Du Quoin Mile, 5th-place/Indy Mile) before a season-ending crash at the Springfield Mile II put him and the team on the sidelines for the remaining events of the year.

In the shot above, Lewis talks with AMA Pro Flat Track and FansChoice.tv announcer Dani Medin after taking the #10 Lloyd Brothers Motorsports/Ducati.net/Vintage Motorcycles-sponsored Ducati 1100 to the win in semi race #1 at the Lima Half-Mile during round 5 of the 2015 AMA Pro Flat Track Grand National Championship Harley-Davidson GNC1 presented by Vance & Hines series at the Allen County Fairgrounds on June 28.

The LBM team, who was the first to put the Italian Aprilia brand into a Grand National Championship race at the Du Quoin Mile in the early-mid '00s and who were the first to win a GNC Mile main event with their Italian Ducati with Joe Kopp at the Prescott Mile I in May '10, has been a stalwart among the competitors for years now and their experience and breadth in the series is all but unequaled. They nearly won their first GNC event with then-rider Henry Wiles on their Aprilia at the Lima Half-Mile in June '08. And they teamed with Brad Baker in his first full season in GNC1 competition to earn 5th-place in the overall championship which earned him Rookie of the Year.

Lewis had a steep learning curve last season on the Ducati, although the former Pennsylvania/now Florida resident is no slouch to learning to wrestle with diversity in riding different machines. This should be a great year for both the team and Lewis as they make their second outing together and try to get the Big Duc back up front where it belongs.

Thanks to Dave, Mike and the team for the press release below and as always we wish you and JL10 the best of luck this season and look forward to seeing you guys up at the front this year!


Atlanta, GA. -- March 30, 2016 -- Lloyd Brothers Motorsports, Inc. and Johnny Lewis will contest select rounds of the AMA Pro Racing Flat Track Championship and the second annual Harley-Davidson Flat Track X Games aboard the newest versions of the LBM Flat Tracker with title sponsorship from Dillard Family Racing.
“Our focus is to make sure that the team has every possible advantage to compete well at each race that we attend while at the same time gaining valuable experience together to move forward in the future,” stated team co-owner Michael Lloyd. “We had several top-five finishes last year running a partial season with Johnny. In addition to removing over 13 pounds from the motorcycle, we have made chassis and power plant changes that should move us forward,” added David Lloyd. 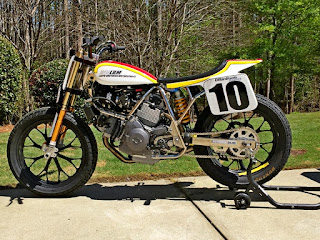 “I am excited to be back with the Lloyd Brothers and Dillard Family again for 2016. Last year we learned so much about the bike and each other that allowed us to build a stronger program for the 2016 season. It was great running towards the lead pack last season with some of my best Mile finishes of my career and a 4th-place at the Summer X Games. I can’t wait to get on the bike again,” said Johnny Lewis.
Sincere appreciation is extended to all of the people and companies that continue to support our team in 2016:
Dillard Family Racing, Motion Pro Tools and Cables, Daniel Kalal, DucShop, Desmo Pro, Vicki Smith at Ducati.net, M4 Exhausts, DucTalk.com, Fuller Moto, Mr. Sign, Spectro Oils, Tri R Distributing, Britt Lynn, Ramspur Winery, Saddlemen, Vortex, Ohlins, TDFJ.com, Pure Attitude, Arai Helmets, Wallace Trucking, 10 Training, Triple J Racing, GiMoto, Light Shoe, Lapizta Watches, 100%, Pro Plates, Setrab USA, Speed Cell Batteries, Chrome It Atlanta, Aldana Racing, K&N Filters and Diamond Chain.