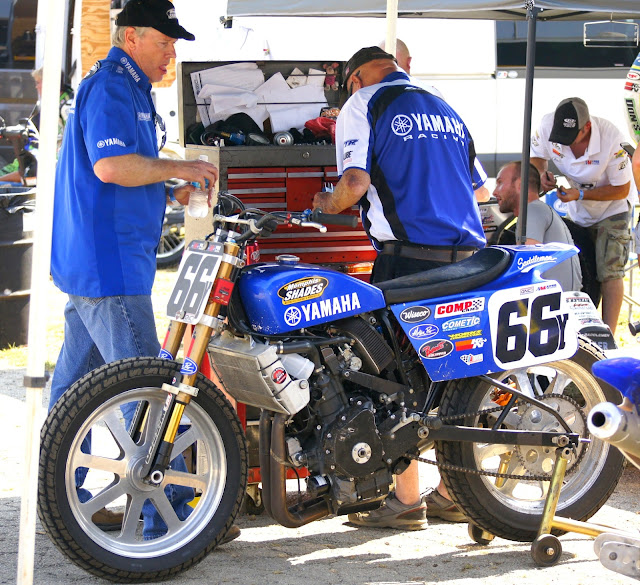 Former AMA Superbike pilot and SMI president Steve McLaughlin announced last week that Yamaha has been brought on board as the presenting sponsor of the Superprestigio of the Americas race scheduled at the Orleans Arena in Las Vegas on Saturday, November 21.

With their long-storied history in the AMA Pro Flat Track Grand National Championship, it will be great to see the crossed tuning forks brand back alongside the greatest racing show on two wheels in the world when this big event rolls off and pits former champions of different disciplines against the stars and heroes of The Rolling Thunder Show within the tight confines of the indoor Orleans Arena facility.

DeMay, with limited funding from Yamaha, built a nearly-stock GNC1-spec half-mile and mile racer based around the popular FZ07 parallel twin, and in the team's first outing this season saw some decent results once Collindres got settled into the role of the team's rider. With Cory Texter starting out in the saddle, Collindres, the former GNC2/Pro Singles Peoria TT winner, took over the ride at the end of June at the Lima Half-Mile. In the three events that he qualified for, the first year expert managed impressive finishes of 14th-place (Lima), 13th-place (Black Hills) and just missed out on a podium finish with a 4th-place finish (Delaware) aboard the trick looking machine.

Collindres (and tuner to the stars DeMay) did a great job in bringing Yamaha back into the spotlight this season, and also pulled out a superb 3rd-place finish aboard DeMay's Yamaha YZ450F Singles mount at the Peoria TT in early August while also winning his heat and besting defending AMA Grand National Champ Jared Mees in the process.

Yamaha had most recently announced the unveiling of their prototype Yamaha FZ07 flat tracker at the AIMExpo in Orlando last month, but weren't ready to admit whether or not they would be hitting the track with it for the 2016 season. Rumors have been swirling since late spring that they had talked to several riders about possibly contesting a factory-backed team in the Grand National Championship, among them former 2-Time AMA Grand National Champion Jake Johnson. It would only be fitting to see them come back to the sport in an assault involving Johnson, who is known as a great development rider and a bring-it-home type of racer throughout his illustrious career in the sport. We'll see and we can only hope!

With Yamaha being announced as the presenting sponsor in Vegas, maybe this will help to spur them along in getting back to the track with a full factory assault on the 2016 AMA Pro Flat Track Grand National Championship Harley-Davidson GNC1 presented by Vance & Hines series. Keep your fingers crossed!

Check out the full press release below, and if you are in the Vegas area over the November 20-21 weekend, be sure to get to the Orleans Arena to see the AMA Pro Flat Track Finals on November 20 and the Superprestigio of the Americas race on November 21. You won't be disappointed.


Press release courtesy of SMI, the promoters of the Superprestigio of the Americas race in Las Vegas at the Orleans Arena on Saturday, November 21. 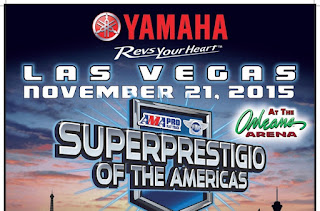 YAMAHA NAMED PRESENTING SPONSOR OF SUPERPRESTIGIO OF THE AMERICAS

LAS VEGAS (NOV. 4, 2015) – SMI is proud to announce that Yamaha Motor Corporation, USA will be the presenting sponsor of the inaugural running of the Superprestigio of the Americas on Saturday, Nov. 21, 2015 at the Orleans Arena in Las Vegas.
“We’re thrilled to bring Yamaha on board as a presenting sponsor of the Superprestigio of the Americas,” said SMI President Steve McLaughlin. “Having a company so steeped in racing tradition makes them a natural partner to launch what we hope will become one of the premier motorcycle racing events in the country. Yamaha and racing are almost synonymous and it’s a great honor to have them as presenter of the first Superprestigio of the Americas.”
The first ever Superprestigio of the Americas (SOTA’15) will bring together top racers from varying racing disciplines to race head to head against AMA Pro Flat Track racing’s leading riders in a big two-day season-ending event at the Orleans Arena in Las Vegas. Running the day before the Superprestigio of the Americas, on Friday, Nov. 20 at the Orleans Arena, will be the AMA Pro Flat Track Championship finale where the 2015 AMA Pro Grand National Champion will be crowned.
Yamaha has a rich history in AMA Grand National Flat Track racing highlighted by AMA Grand National Championships won by legendary Hall of Famer Kenny Roberts in 1973 and ’74. The Yamaha TZ700-based flat track motorcycle remains one of the most unforgettable machines ever raced in the history of AMA Grand National competition. Kenny Roberts reuniting with the TZ and doing exhibition laps at racing speed at the Indy Mile during Indianapolis MotoGP weekend in 2009, instantly became an iconic moment in the history of flat track racing.
Last month Yamaha thrilled show goers at AIMExpo 2015 by unveiling its Yamaha DT-07 Flat Track concept bike. The machine, powered by a Yamaha FZ-07 engine, was the hit of the show. This summer an FZ-07-based machine built by Babe DeMay showed great promise in flat track competition. Dominic Colindres won a Grand National Heat race at the Roar on the Shore Grand National in Delmar, Del., in September and went on to score an excellent fourth-place finish in the national.
“Yamaha is very excited to be a part of the Superprestigio of the Americas,” said Yamaha’s Communications General Manager Bob Starr. “We love the concept of bringing together top riders from various disciplines to compete head to head in this kind of all-star competition. We think the event will be a big success and we’re pleased to be involved particularly during the 60th Anniversary celebration of Yamaha Motor Company.”
Spots are still open for additional AMA Pro Grand National riders to qualify and some of those won’t be decided until the night before SOTA’15 during the AMA Pro Flat Track final on Friday, Nov. 20, 2015, also at the Orleans Arena.  The two riders who win the GNC1 and GNC2 class in the AMA Pro Flat Track final Friday night will also gain participation in the Superprestigio of the Americas. More details to come at www.superprestigio.com.
The Superprestigio of the Americas (SOTA’15) will bring together leading motorcycle racers from various motorcycle-racing disciplines from around the world to compete head to head with the stars of AMA Pro Flat Track on a specially-designed indoor short track at the Orleans Hotel & Casino in Las Vegas on Nov. 21, 2015. The special race is part of the big Las Vegas doubleheader weekend with the AMA Pro Flat Track finale taking place the night before (Nov. 20, 2015) on the same track. #VegasFT
For additional information go to www.superprestigio.com or call toll free 1-844-722-6453.
--
Larry Lawrence
c. (317) 332-3899
SMI Media Rep
Sacramento Mile - May 30
Charlotte Half Mile - Aug 29
Las Vegas Finals - Nov 20
lawrencemedia@hotmail.com