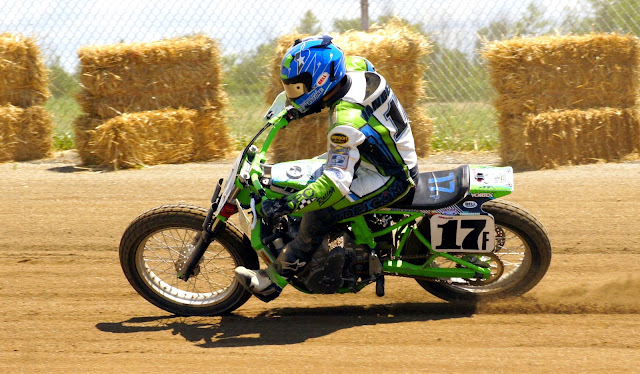 Jarod Vanderkooi burst onto the scene in AMA Pro Flat Track in the 2014 season while riding in the former Pro Singles class, winning two points-paying races (Grey's Harbor, Indy) and completely dominating in both runs of the no points-paying Pro Twins races at both Springfield Miles. By the end of the season, he had amassed not only those wins, but four other top-5 and three more top-10 finishes to end the season in the 4th-place spot in the AMA Pro Pro Singles Championship while riding his family-owned and prepped Honda's.

Fast forward one year and the rookie sensation from Ohio was inked alongside Jeffrey Carver, Jr. to ride on the newly revamped Don's Kawasaki team in the newly renamed AMA Pro Flat Track Grand National Championship Harley-Davidson GNC1 presented by Vance & Hines class. And Vanderkooi accepted the challenge and has had a strong season running against the best of the best in The Rolling Thunder Show.

Although missing two rounds due to not being able to qualify (SF Mile I, Lima), Vanderkooi still has amassed enough points to sit in the 11th-place spot in the championship heading into the final season round in Las Vegas in just shy of three weeks. With two top-5 finishes (Charlotte, Delaware) and two more top-10s to his credit (DuQuoin, SF Mile II), Jarod was able to total enough points ahead of fellow rookie contender Dominic Collindres to garner the nod for the 1st year Expert/GNC1 riders this season.

In the shot above, Vanderkooi works his magic on the #17F Don's Kawasaki/DPC Racing/Floyd Tapp-sponsored Kawasaki EX650 during the second qualifying session at the Lima Half-Mile held at the Allen County Fairgrounds on June 28.

Vanderkooi will be officially announced as the new Rookie of the Year at the season-ending banquet in Las Vegas, and will add his name to a long list of greats to garner that special award like Matt Weidman, Jake Johnson, and Jake Shoemaker, among others. He will receive a special $5K check from Saddlemen for his accomplishments that will help to line his and his team's pockets for their hard-earned efforts for this year's outstanding season.

Check out the full release below thanks to AMA Pro Flat Track, and be sure to put the final round of the season on your calendar for the Flat Track Finals at the Orleans Arena in Las Vegas on Friday, November 20.

Jarod Vanderkooi locks up 2015 Saddlemen Rookie of the Year Award