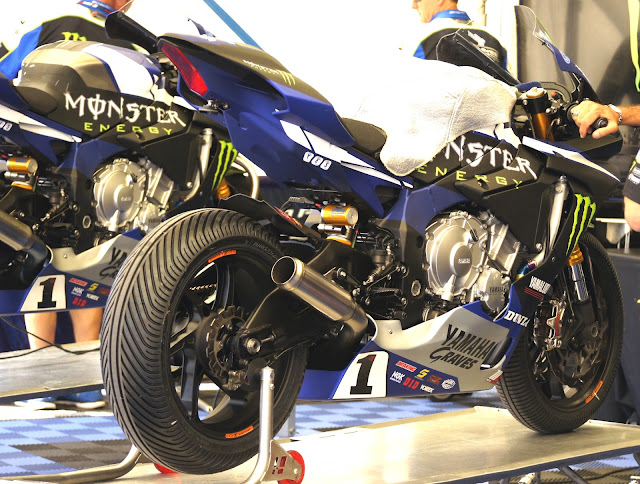 4-Time AMA Superbike Champion and the second-winningest rider in the series, Josh Hayes, will be turning in his ultra-fast Graves Motorsports Yamaha R1 for a flat track racer as he will be heading to Las Vegas to contest the Superprestigio of the Americas race on November 21 as was announced last week.

In the shot above, Hayes #1 Monster Energy/Graves Motorsports-sponsored Yamaha R1s sit under the team's tent at the MotoAmerica round held in conjunction with the Red Bull Indianapolis MotoGP at the Indianapolis Motor Speedway on August 7, 2015.

Hayes, who lost his bid for a fifth title last month to team mate Cameron Beaubier, will be among a stacked field of riders in this endeavor and with his experience in training on the dirt could play into the wildcard factor in the race on the 1/10th mile oval at the Orleans. If you're going to be in Vegas for the AMA Pro Flat Track season finale, you don't want to miss this one, either.

Check out the press release below thanks to SMI, this year's promoters of the Sacto Mile, the Charlotte Half-Mile, the Las Vegas Short Track finale and the Superprestigio of the Americas 2015 race.


Press release courtesy of SMI, promoters of the Superprestigio of the Americas in Las Vegas, November 21

SUPERBIKE RACING LEGEND JOSH HAYES TO RACE SUPERPRESTIGIO OF THE AMERICAS
LAS VEGAS (OCT. 6, 2015) – Iconic MotoAmerica AMA Superbike racer Josh Hayes will race the Superprestigio of the Americas at the Orleans Arena in Las Vegas on Saturday, Nov. 21, 2015. Hayes will race a Yamaha YZ-450F-based machine in the competition.
Hayes is quite simply one of the most dominant riders in the history of AMA Superbike. His numbers speak for themselves: A four-time AMA Superbike title winner with Monster Energy/Graves Motorsports Yamaha, Hayes is ranked second all-time for AMA Superbike championships, wins, with 58 career victories, and poles, with 37. This season marked the 18th season on the pro circuit for Hayes. He won a series leading 10 races, but came up just four-points shy of winning another AMA Superbike title. Even at the highest level of motorcycle racing Hayes has proved his mettle. He turned a lot of heads with his solid MotoGP wildcard performance at Valencia in 2011 where he finished seventh.
Like many road racers Hayes has used flat track as a form of training to keep him sharp for Superbike competition, so racing on the indoor short track won’t be totally unfamiliar to him, but it will mark his first time racing against some of the best flat trackers in the world.
For Hayes the Superprestigio of the Americas will present a unique challenge. 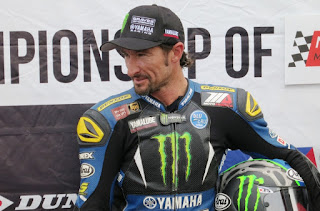 "When you look at some of the guys coming to compete in Las Vegas, the competition level is going to be extremely high,” Hayes said. ”I’ve raced some local flat track events in Southern California, but I’m definitely putting myself at the low end of the experience spectrum at the Superprestigio. I’m a racer so I’ll go out there and give it my best shot. We all want to be at the top no matter what kind of racing we do.”
Hayes joins AMA Pro Grand National Champions Jared Mees, Jake Johnson, Kenny Coolbeth, Jr. and Brad Baker, along with X Games Flat Track Gold Medalist Bryan Smith as riders already invited to the inaugural Superprestigio of the Americas (SOTA’15).
“I have my own personal bike and Keith (Yamaha racing boss Keith McCarty) has offered to let me test a bike they’ve built,” Hayes explained. “So I’m not sure which one I’ll ride yet. I’m looking forward to racing in Las Vegas and having a lot of fun. I haven’t had a chance to get my focus on getting prepared for the race yet, but that’s coming soon. I still have a little time.”
Saturday night’s Superprestigio of the Americas will be the culmination of an exciting doubleheader weekend of racing. Friday night at the Orleans Arena will witness the AMA Pro Flat Track Final, a race that will decide this year’s AMA Pro Grand National Championship.
Keep posted for future announcements of other riders who will be invited to SOTA’15.
Spots are still open for additional AMA Pro Grand National riders to qualify and some of those won’t be decided until the night before the event.  More details to come at www.superprestigio.com.
The Superprestigio of the Americas (SOTA’15) will bring together leading motorcycle racers from various motorcycle-racing disciplines from around the world to compete head to head with the stars of AMA Pro Flat Track on a specially-designed indoor short track at the Orleans Hotel & Casino in Las Vegas on Nov. 21, 2015. The special race is part of the big Las Vegas doubleheader weekend with the AMA Pro Flat Track finale taking place the night before (Nov. 20, 2015) on the same track. #VegasFT
For additional information go to www.superprestigio.com or call toll free 1-844-722-6453.
--
Larry Lawrence
c. (317) 332-3899
SMI Media Rep
Sacramento Mile - May 30
Charlotte Half Mile - Aug 29
Las Vegas Finals - Nov 20
lawrencemedia@hotmail.com