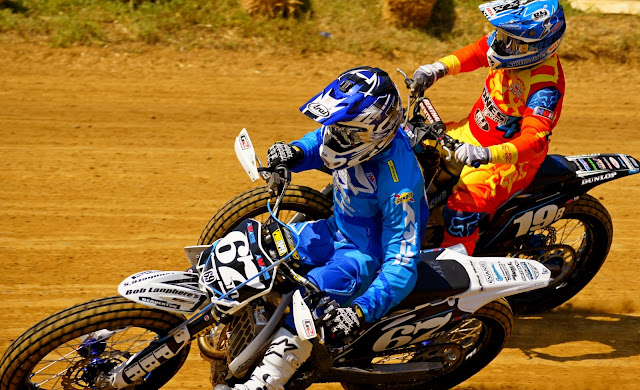 Davis Fisher set the world of AMA Pro Flat Track racing on fire during the last two seasons in the AMA Pro Pro Singles/GNC2 Championship, nearly winning the title last season only to come up one point short in the end, but this season being able to seal the deal with one round to go at the Delaware Half-Mile.

As a result of him clinching the championship at the Roar on the Shore, and the fact that he will be moving to the GNC1 Championship for the 2016 season, AMA Pro Flat Track will be allowing him to wear the #1 plate at the season finale round of the Las Vegas indoor short track being held at the Orleans Arena this coming Friday, November 20.

Jerry Cameron out of the Beaverton, OR. area where Fisher resides from, was able to get this photo last night of Dashin' Davis' Honda CRF450R with the #1 plate aboard at the season finale short track in Salem, OR. A big tip of the helmet to Jerry!

In the shot above, Dashin' Davis on the #67M Parkinson Brothers Racing/Bob Lanphere Beaverton Motorcycles/Dan Wall Racing-sponsored Honda CRF450R battles with Justin Jones on the #19B RLJ/Elder Trucking/Hollink Motorsports-backed Honda during heat race #2 in the AMA Pro GNC2 Championship series at round 9 of the 2015 AMA Pro Flat Track Grand National Championship season at the Peoria TT on August 16.

With the long two-month wait since the last round in Delaware, fans, riders and teams alike are chomping at the bit to get the last race of the season in this Friday in Las Vegas, and the event is looking to be a very competitive one inside the confines of the indoor Orleans Arena facility, and the entry list for both the GNC1 and GNC2 classes are shaping up nicely.

We wish the best to the new champion in the GNC2 class, Davis Fisher, as he heads into his last event as a Pro/GNC2 rider before taking the big step into The Rolling Thunder Show GNC1 class for the 2016 AMA Pro Flat Track Grand National Championship, and I am sure he won't disappoint either this coming weekend or next season when he moves up to the bigs. Go get 'em man and good luck!

You can check out the full press release below from AMA Pro Flat Track as we await the final round coming up this Friday.

2015 GNC2 Champion Davis Fisher to wear No. 1 plate in Vegas


DAYTONA BEACH, Fla. (Nov. 13, 2015) - Davis Fisher clinched the 2015 GNC2 championship after earning the Roar on the Shore victory in dramatic fashion last round in Delaware. On Nov. 20 at the Orleans Arena in Las Vegas, Fisher will sport the No. 1 plate on his Parkinson Brothers Racing Honda CRF450R during AMA Pro Flat Track's final round of competition in 2015.
The No. 1 plate is typically reserved for the defending champion in each of AMA Pro Flat Track's classes. However, since there is not an active defending champion in the GNC2 class this season, Fisher has been granted the right to wear the heavily sought-after No. 1 plate on his motorcycle at the AMA Pro Flat Track season finale.
"It feels great to be able to run the No. 1 in Vegas," said Fisher. "It will be really cool because I'm able to show what I have earned by wrapping up the GNC2 championship early and there is no deciding factor in Vegas. It feels even better knowing that I have accomplished this after missing the championship by a single point in 2014." 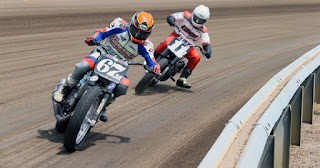 Davis Fisher #67M on the Parkinson Brothers Racing Kawasaki leads Andrew Luker on the #11Z Kennedy Racing XR750 during a qualifying round at the Springfield Mile II on September 6. Fisher, who clinched the GNC2 Championship at the Delaware Half-Mile, will be granted the right to wear the #1 plate in his final GNC2 race at the Las Vegas Short Track Season Finale this coming Friday, November 20. AMA Pro Flat Track photo by Brian J. Nelson.

Last season, Michigan-native Kyle Johnson topped Fisher by just one point to claim the GNC2 championship before stepping up to the elite Harley-Davidson GNC1 presented by Vance & Hines class. It was Fisher's championship to lose heading into 2015, and the Oregonian didn't disappoint.
Like many riders who win the GNC2 championship, Fisher plans to graduate to the Harley-Davidson GNC1 presented by Vance & Hines ranks next season. This rising star is sure to impress when he matches up against the best flat track racers in the world in 2016.
The Flat Track Season Finale will take place on a specially-designed indoor short track at the Orleans Hotel & Casino in Las Vegas on Saturday night, Nov. 20. The Superprestigio of the Americas will take place on the following night, Nov. 21, bringing together leading racers from various motorcycle-racing disciplines to compete head to head with the stars of AMA Pro Flat Track.
To purchase tickets for the Flat Track Season Finale or the Superprestigio of the Americas, please visit www.superprestigio.com. If you can't make it to Vegas, be sure to tune in to the FansChoice.tv broadcast at www.fanschoice.tv/watch-live/ama/flat-track or watch the cable broadcast of the event on NBC Sports Network the following weekend on Sunday, November 29 at 9:00 p.m. ET (6:00 p.m. PT).