Great news came down the pipeline last week when it was announced that NBC Sports Network will be broadcasting the season ending Superprestigio of the Americas race in Las Vegas on a tape-delayed basis on Sunday, November 29. The event that pits American AMA Pro Flat Track riders against a diverse field of National and International motorcycle racing stars will be held inside the tight confines of the Orleans Arena this coming Saturday, November 21 in Las Vegas.

You can check here to see where to find NBC Sports Network on your local cable or satellite provider.

In the shot above, riders in the 2015 AMA Pro Flat Track Grand National Championship Harley-Davidson GNC1 presented by Vance & Hines series get ready to do battle in round 9 of the season at the Peoria TT on August 16.

Also seen on the second row, outside left is Stevie Bonsey on the #80 Cernics Suzuki/Yoshimura/Cliff Racing-backed Suzuki RMZ450.

The Superprestigio of the Americas race this coming Saturday, November 21 promises to be a great event that will no doubt cap off the wonderful season of racing we have seen this year. You can check out the full press release below thanks to SMI and be ready to take in all the action online this Saturday and watching the tape-delayed event in two weeks time. It's guaranteed to be a barn burner full of fun bar banging and tire smoking swapping of places throughout the evening.


Press release courtesy of SMI Promotions, the promoters of the AMA Pro Flat Track Season Finale and the Superprestigio of the Americas 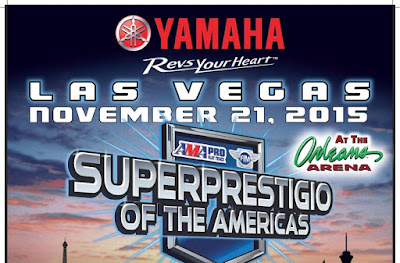 
LAS VEGAS (Nov. 10, 2015) – NBC Sports Network (NBCSN) will televise the 2015 Superprestigio of the Americas presented by Yamaha motorcycle race on Sunday, November 29, at 9 p.m. ET /6 p.m. PT.
The Superprestigio of the Americas, held at the Orleans Arena in Las Vegas on Saturday, Nov. 21, 2015, will bring together motorcycle racers from different disciplines to race together on the same track that will host the 2015 AMA Pro Flat Track Final the night before in this exciting season-ending doubleheader. Top flat track riders such as defending AMA Pro Grand National Champion Jared Mees and former champs Jake Johnson, Kenny Coolbeth, Jr., Brad Baker and X Games Gold Medalist Bryan Smith will race against road racing champs such as former MotoAmerica/AMA Superbike Champion Josh Hayes and former AMA Supersport Champion Roger Hayden, current MotoAmerica champs Joe Roberts and Jake Gagne as well as more riders to be announced.
“We’re thrilled to be able to showcase the Superprestigio of the Americas to a national audience on NBCSN ,” said SMI President Steve McLaughlin. “It’s a great opportunity to expose a national audience to the excitement of flat track racing. It also provides our riders, their sponsors and the supporters of our event an immense reach to an audience of more than 85 million households on NBCSN.”
The Friday and Saturday night races at the Orleans Arena will be the centerpiece of a full weekend of exiting activities in Las Vegas, including the 2015 AMA Pro Flat Track Awards Banquet scheduled for Sunday, Nov. 22 at the Cosmopolitan of Las Vegas.
NBCSN’s telecast of the Superprestigio of the Americas is being made possible by sponsorship from Yamaha Motor Corp.,USA, Thom Duma Fine Jewelers, Geico, Saddlemen, Ascot Motorsports, Evans Oil Coolers, Las Vegas Harley-Davidson and Mitas Tires.

NBC Sports Group is the television “home of motorsports” in the U.S., with comprehensive coverage of the NASCAR Sprint Cup and XFINITY Series, the Verizon IndyCar Series and Formula One. NBC Sports Group’s motorsports portfolio also includes the Lucas Oil Pro Motocross Championship, Red Bull Global RallyCross and the AMSOIL Grand National Cross Country Series (GNCC), presented by Maxxis.
The Superprestigio of the Americas (SOTA’15) will bring together leading motorcycle racers from various motorcycle-racing disciplines from around the world to compete head to head with the stars of AMA Pro Flat Track on a specially-designed indoor short track at the Orleans Hotel & Casino in Las Vegas on Nov. 21, 2015. The special race is part of the big Las Vegas doubleheader weekend with the AMA Pro Flat Track finale taking place the night before (Nov. 20, 2015) on the same track. #VegasFT
For additional information go to www.superprestigio.com or call toll free 1-844-722-6453.
--
Larry Lawrence
c. (317) 332-3899
SMI Media Rep
Sacramento Mile - May 30
Charlotte Half Mile - Aug 29
Las Vegas Finals - Nov 20
lawrencemedia@hotmail.com