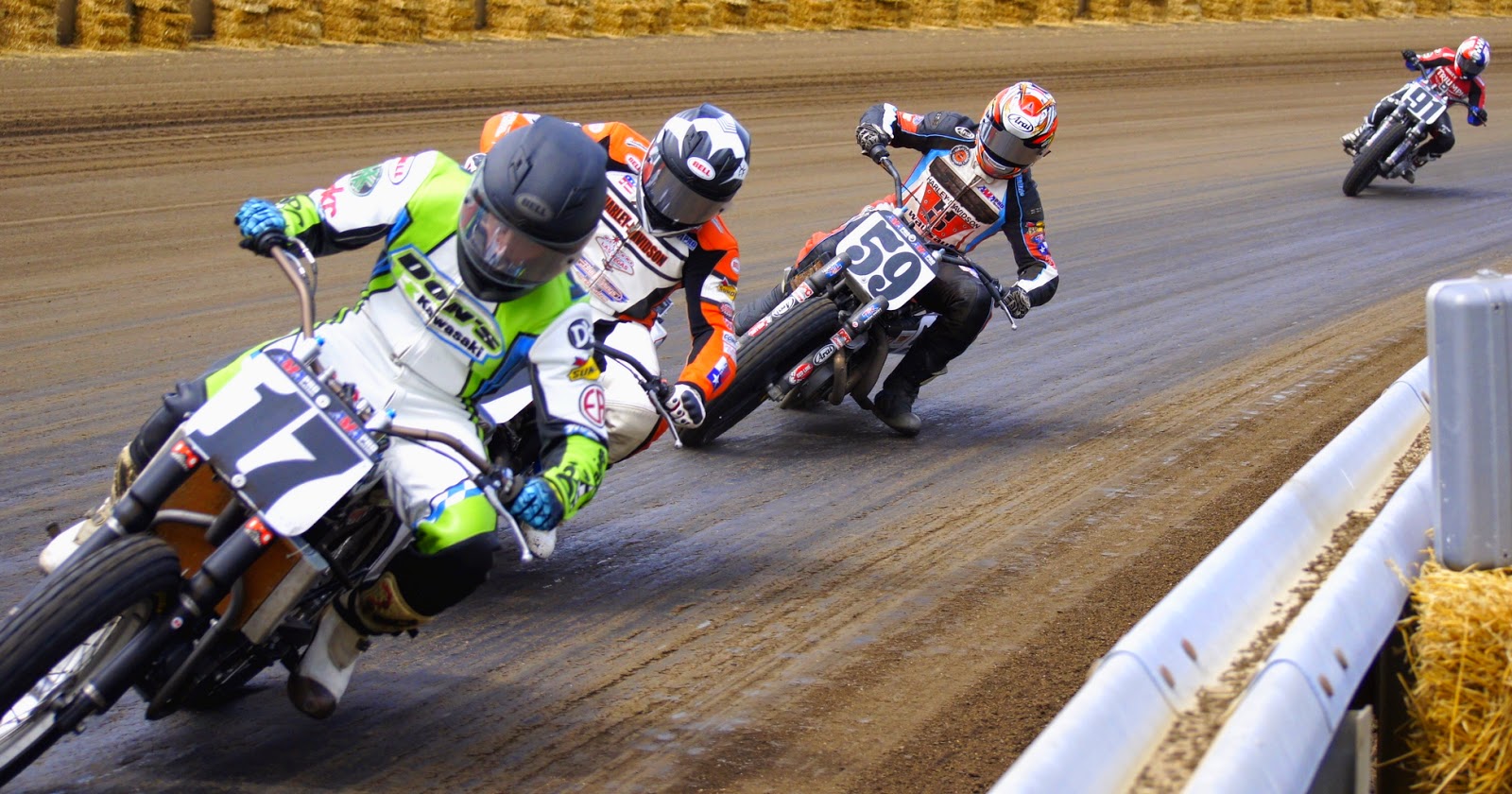 Well fans on the Left Coast won't have to wait much longer to see a rematch between the duo, as SMI, the promoters of the Sacto Mile, has invited both The Prince of Peoria and Springerman back to duke it out again during round 4 of the 2015 AMA Pro Flat Track Grand National Championship season on Saturday, May 30.

Last year's 'exhibition' race between the two saw Carr, aboard a Zanotti Racing Harley-Davidson XR750 and Springer, aboard a Rogers Racing XR750, battle throughout their match race around the track in what was described as a no-holds-barred tuck and draft right down to the finish. The Sacto Mile knows how to entertain fans and run a superb program, and bringing two of the most heralded heroes of the sport back again to entertain and thrill the crowd is but one way these folks show the fans a great time and a great night of racing.

In the shot above, heat race #3 during the Springfield Mile I on May 25 saw Henry Wiles on the #17 Don's Kawasaki/DPC Racing/EA Racing-sponsored Kawasaki EX650 hound early leader Willie McCoy for the first seven laps of the 8-lap qualifying heat, only to get around him on the last go around and take the win in his inaugural ride on his new Green Machine. Jared Mees on the #9 Rogers Racing/Las Vegas H-D/Blue Springs H-D-backed XR750 and McCoy on his #59 H-D of Wausau/Tucker Rocky/Independence H-D try to do their best to get back in front of The Hammer as they come out of turn four, with Wiles going on to take the win ahead of the duo by .037 and .079 seconds respectively. Mikey Martin on the #91 Bonneville Performance/Factory Triumph Racing/Castrol Racing-sponsored Triumph Bonneville brings up the rear in what would see Martin heading to the semi in order to qualify for the National main at round 3 of the 2014 AMA Pro Flat Track Grand National Championship at the Illinois State Fairgrounds over the Memorial Day weekend.

Bravo and a tip of the helmet goes out to SMI and the great team of folks helming the ship at the running of the Sacramento Mile for going over the top to bring Carr and Springer back for another match race, as it shows their unparalleled support of the sport and how to go about bringing the fans in and showing them a good time for their buck$ to go along with hosting The Rolling Thunder Show, the best two wheeled racing in the world.

You can check out the full press release below, and if you are on the West Coast, you don't want to miss this one as it is guaranteed to be a barn burner at Cal-Expo on May 30!

Clash of the Titans II: Springsteen vs. Carr at the 2015 Sacramento Mile
Flat Track Legends to Meet in Friendly Rematch
SACRAMENTO, CA (April 1, 2015) – One of the highlights of the 2014 AMA Pro Grand National Championship season was the Shootout Exhibition ride between Jay Springsteen and Chris Carr at last year’s Sacramento Mile. The friendly contest between the two AMA Grand National living legends was so popular with the fans that they demanded a rematch and what the fans want they get. So at this year’s 50th running of the Sacramento Mile, at Cal Expo on May 30, 2015, fans will not only get a chance to meet two of racing’s superstars during the evening’s festivities, but the night will be highlighted by a the return of the friendly one-on-one Shootout Exhibition ride on the Mile between the Hall of Famers dubbed “Clash of the Titans II”.
Springsteen took victory in last year’s inaugural Clash by the slightest of margins. He’ll be looking to repeat at this year’s event, but look for Carr to go all out to try to even the score.
Jay Springsteen is considered one of the best AMA Grand National flat-track racers of all time. Bursting onto the scene and earning the AMA Rookie of the Year Award in 1975, Springsteen won three consecutive AMA Grand National Championships starting in 1976. In 1982 he became the first rider to reach 30 wins in AMA Grand National competition – a feat he accomplished at the Sacramento Mile. 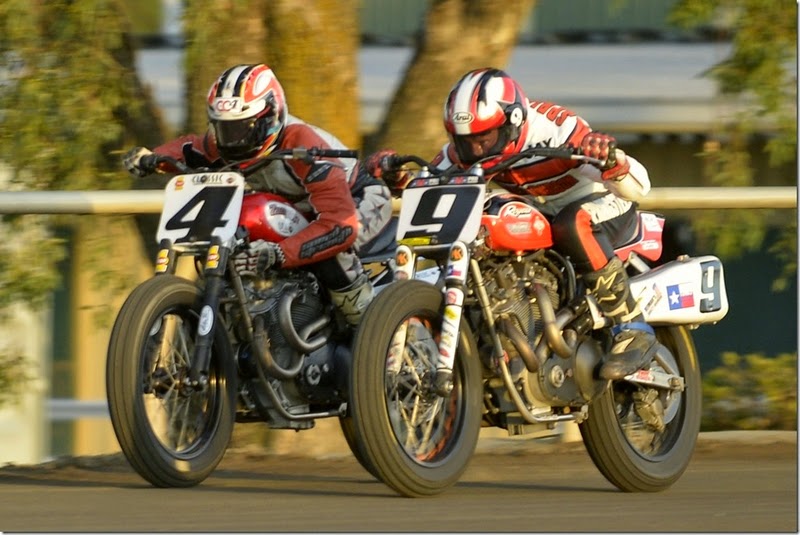 7-Time AMA Grand National Champion Chris Carr on the #4 Zanotti Racing XR750 battles with 3-Time AMA Grand National Champion Jay Springsteen on the #9 Rogers Racing XR750 during their exhibition match race at the Sacto Mile in 2014. The duo will return for their second go at it during round 4 of the 2015 AMA Pro Flat Track Grand National Championship in Sacramento at the Cal-Expo Fairgrounds on May 30. Photo courtesy of the Sacramento Mile by Dave Hoenig/Flat Trak Fotos.com.
California’s own Chris Carr was the dominant rider in the AMA Grand National Championship during the early 2000s. The native of Stockton won seven national championships and retired second on the AMA Grand National all-time wins list with 78. He rode for Harley-Davidson as a factory rider for much of his early career, but gained the majority of his success as a private team owner. He was also one of the few riders in his era of Grand National racing to attract major corporate sponsorship, being backed by Ford Motor Company. Carr considered the Sacramento Mile his home race and he is one of the most successful riders ever in the classic event. He won a total of nine Grand Nationals in Sacramento, his first coming in 1987 and his final win there coming in 1999.
“We heard the fans loud and clear and we’re happy to bring Jay and Chris back for Sacramento’s Clash of the Titans II,” said Steve McLaughlin, of SMI, the group promoting the event. “Even though both of these legendary riders are retired they proved last year that they had enough speed in reserve to have qualified for the National last year. We never expected the guys to go that fast, but it shows that they still have their competitive spirits completely intact. It’s going to be hard to top last year’s Clash, but we’re looking forward to the rematch.”
The AMA Pro Grand National Championship series is one of the longest running motorcycle racing championships in the world. On the long straights of the Sacramento Mile top speeds can reach 130 miles per hour and this year’s race at Cal Expo is the only Grand National Mile in the West. Flat track racing has produced many of America’s Motorcycle World Champions such as Kenny Roberts, Eddie Lawson, Wayne Rainey, Kenny Roberts, Jr. and Nicky Hayden. Visit www.sactomile.com to keep up with all the latest on the event.
Practice for the 50th Sacramento Mile begins on Saturday, May 30 at 2:00 p.m. and opening ceremonies for the evening program kick off at 6:00 p.m.
Visit us at: http://www.sactomile.com/
Via Facebook: https://www.facebook.com/SactoMile
Twitter: https://twitter.com/sactomile
YouTube: http://www.youtube.com/user/sactomile
---
*** 2015 Ticket Information: Ticket information is available for the May 30, 2015 Sacramento Mile at www.sactomile.com.
Fans can order tickets online  at https://secure.interactiveticketing.com/b/ae283e, by calling 1-844 SAC MILE (1-844- 722-6453).
Tickets for groups of 20 or more also are available. Contact the Cal Expo Group Sales Department at boxoffice@calexpo.com for more information.