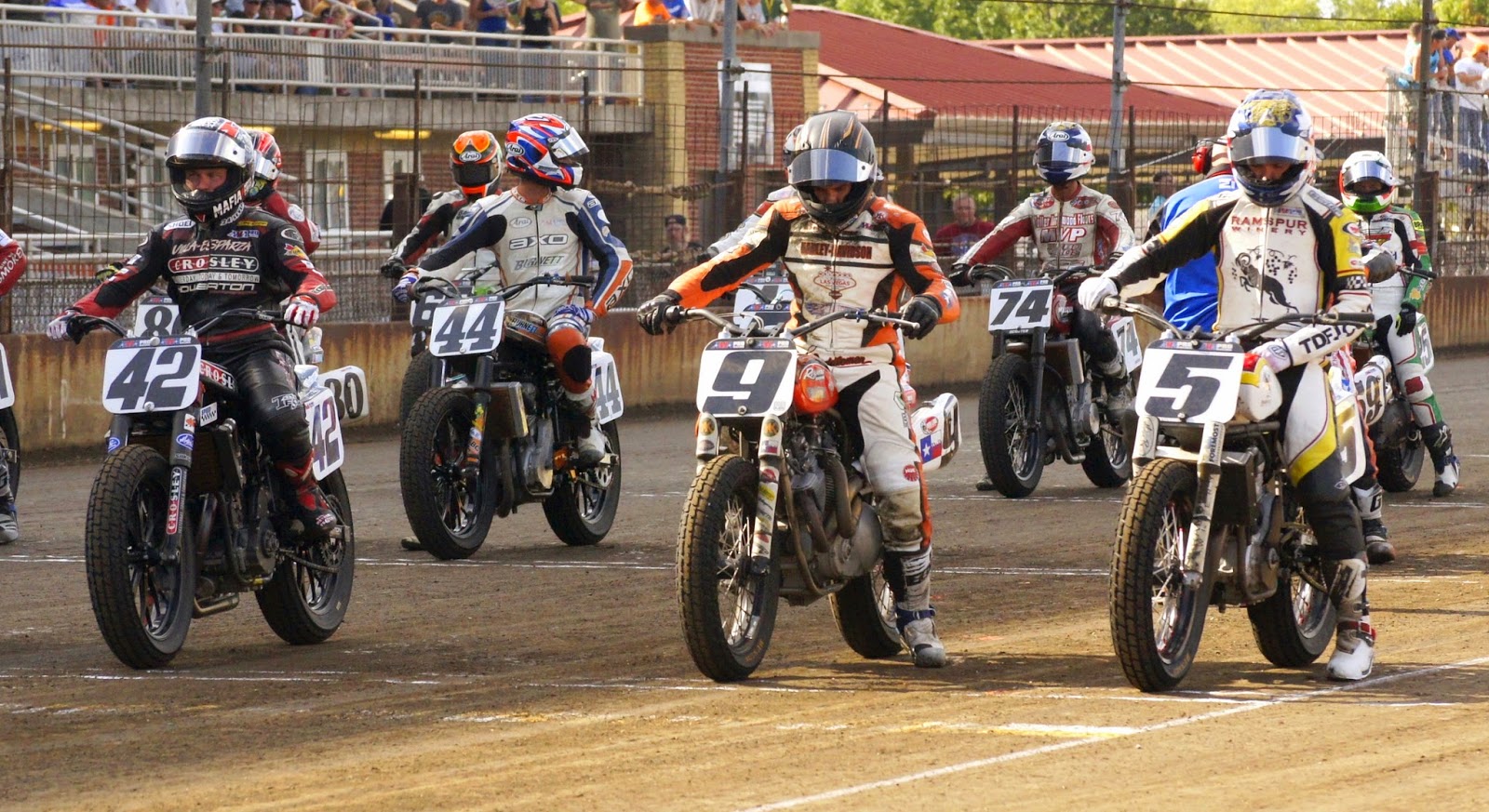 The penultimate round of the 2014 AMA Pro Flat Track Grand National Championship saw the final outcome shake up the points standings as the series gets ready to head the it's season finale at the Pomona Half-Mile Flat Track Finals this coming Saturday, October 11. Defending AMA Grand National Champion Brad Baker got the monkey off his back that had been clinging to him all season to take the win at the Ramspur Winery Calistoga Half-Mile, his first with the Harley-Davidson Motor Company and his first carrying that elusive #1 plate.

But probably the biggest subject of talk after the race and since has surrounded the disqualification of Bryan Smith at Calistoga after his mount starting spewing smoke close to the halfway point of the race, and he was shown the black flag roughly 12 laps into the race while running in 4th-place and had managed to move up into 2nd- place in the race behind eventual winner Baker. What had been a 7-point lead in the series championship standings over 2012 AMA Grand National Champion Jared Mees heading into the penultimate round left Smith with a 13-point deficit to Mees, and only 3-points up on 2010-11 AMA Grand National Champ Jake Johnson, both of whom grabbed podium finishes of 2nd- and 3rd-place, respectively, to better shore up their positions in the title battle.

A disqualification in any given race is bad for any team on any level, but a lot of talk, especially on some of the internet boards and on the largest social network available today to the masses has seen the usual rants from those 'not in the know' about the AMA holding favorites and wanting to favor the long-standing Harley-Davidson teams over the now-more dominant Kawasaki teams. But those same rants come from those that aren't familiar with race rules as they pertain to a smoking machine involved in high-speed competition and fail to realize that Smith's machine could have been spewing oil onto the track and thusly onto the riders if it had been allowed to continue, thusly creating what could have been even more disastrous implications if it would have been oiling down the surface, and causing injury or worse to those behind him.

Obviously, the biggest loser in this situation that occurred last weekend at Calistoga was to Smith and the #42 Villa-Esparza/Crosley Radio/Howerton Products Kawasaki team, in terms of losing their decent lead in the championship standings, in what would have been a strengthening of that lead if the race had played out (under normal, non-smoking conditions) as Smith would have most likely finished in the runner-up spot to Baker, and Mees would have been bumped back to 3rd-place and Johnson to 4th-place in the finishing order. But unfortunately for the #42 team, that didn't occur, and safety took hold in the form of the black flag that negated Smith's possible solid finish. And obviously, safety is paramount above all in any form of motorized competition and as we all have seen in our years (or decades) of following any form of racing, safety was not compromised and as a result, the points standings were shaken up as a result of safety being played out above all other wants or wishes.

And what we have now is a new points leader heading into the season finale at Pomona on Saturday, with Mees taking over the point in the standings which he had held earlier in the season, and we see for the third time in the last five seasons the points being shaken up after the leader coming into one of the final rounds losing that lead either due to a DQ or a mechanical malady. For those that don't remember those other two instances, Joe Kopp went into the Minnesota round in late 2010 as the title leader when the wheels came off of his title aspirations after losing the chain on his Lloyd Brothers Motorsports Ducati and handing the lead over to eventual champion Jake Johnson, and then in 2011 with Jared Mees leading the championship heading into the Calistoga round when he was DQ'd for the use of his back-up machine in what was deemed to be a misread on an AMA Pro Flat Track rules interpretation, and again handing over the championship points reign to Johnson, who went on to score his second of two overall AMA Grand National Championships.

In the shot above, the top-3 riders in the title hunt are ready to go in round 14 of the 2014 AMA Pro Flat Track Grand National Championship main event at the Springfield Mile II at the Illinois State Fairgrounds on August 31.

Bryan Smith on the #42 Villa-Esparza/Crosley Radio/Howerton Products-sponsored Kawasaki EX650, Jared Mees on the #9 Rogers Racing/Las Vegas H-D/Blue Springs H-D-backed Harley-Davidson XR750, and Jake Johnson on the #5 Ramspur Winery/Lloyd Brothers Motorsports/Parkinson Brothers Racing-sponsored Kawasaki are all in in each of their own trains of thought prior to the switching on of the green light for the 25-lap National main at the iconic facility that hosts the greatest racers in the greatest racing series on two wheels in the world over the Labor Day weekend.

With the points now having been shaken up heading to Pomona, all three of the championship contenders have a shot at taking home the crown jewel that is the 2014 AMA Grand National Championship. And each has his own advantages in stellar crew chiefs (Mees, with the second all-time winning tuner in AMA Grand National Championships with tuner to the stars Kenny Tolbert, Smith with the powerhouse crew of Jeff Gordon, Dink Glidden and Bryan's Dad, Barry, behind him, and Johnson with the tuning finesse of championship-winning wrench master Bret Armbruster in his corner, as well as a full stable of Lloyd Brothers Motorsports machinery to help him grab that #1 plate again.) Each has ample experience and history at Pomona, let alone on half-miles, and each has been there in the crunch for the big prize, although Smith is the only rider who doesn't sport a #1 plate in the overall championship to show for his merits.

Saturday will tell the tale when the men and women of The Rolling Thunder Show hit the track for the final time in 2014 and the final run to the season's end comes to a climax at the Cal-Expo Fairgrounds to wrap up what has been a superb season of battle amongst the greatest racers in the world. And all eyes will be on the three men in the chase for the #1 plate to see who will have the most to grab the crown and carry the #1 plate for the 2015 season. And you better not miss it! 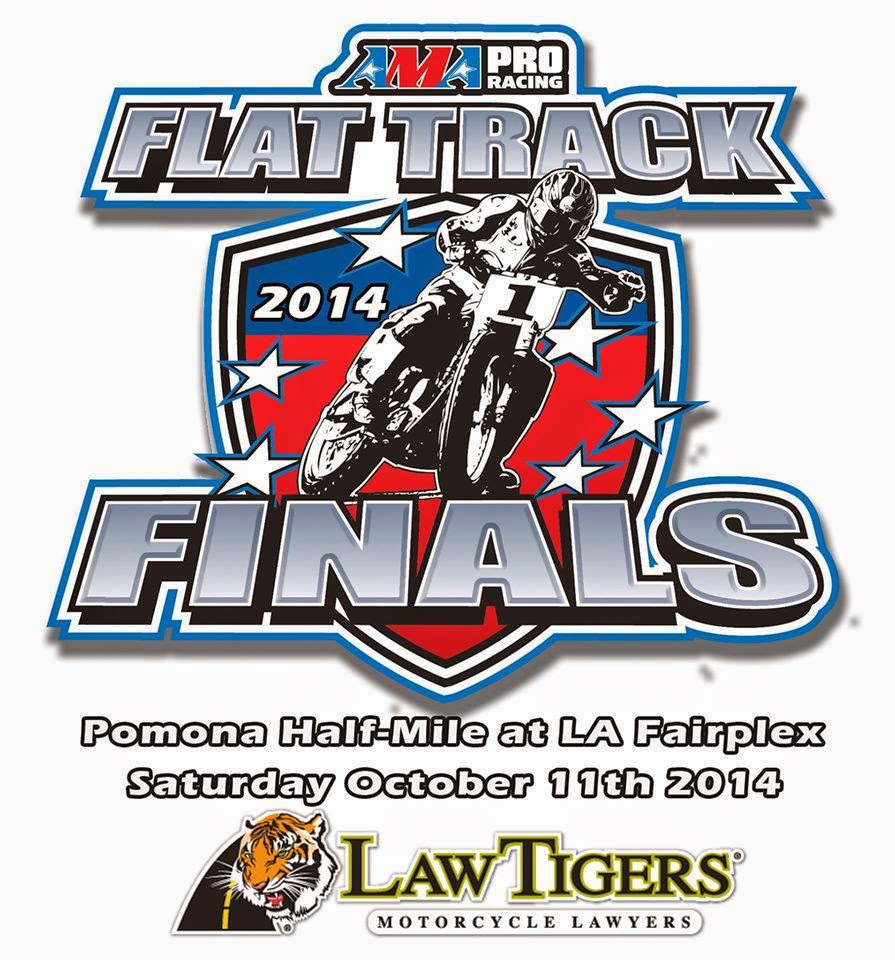