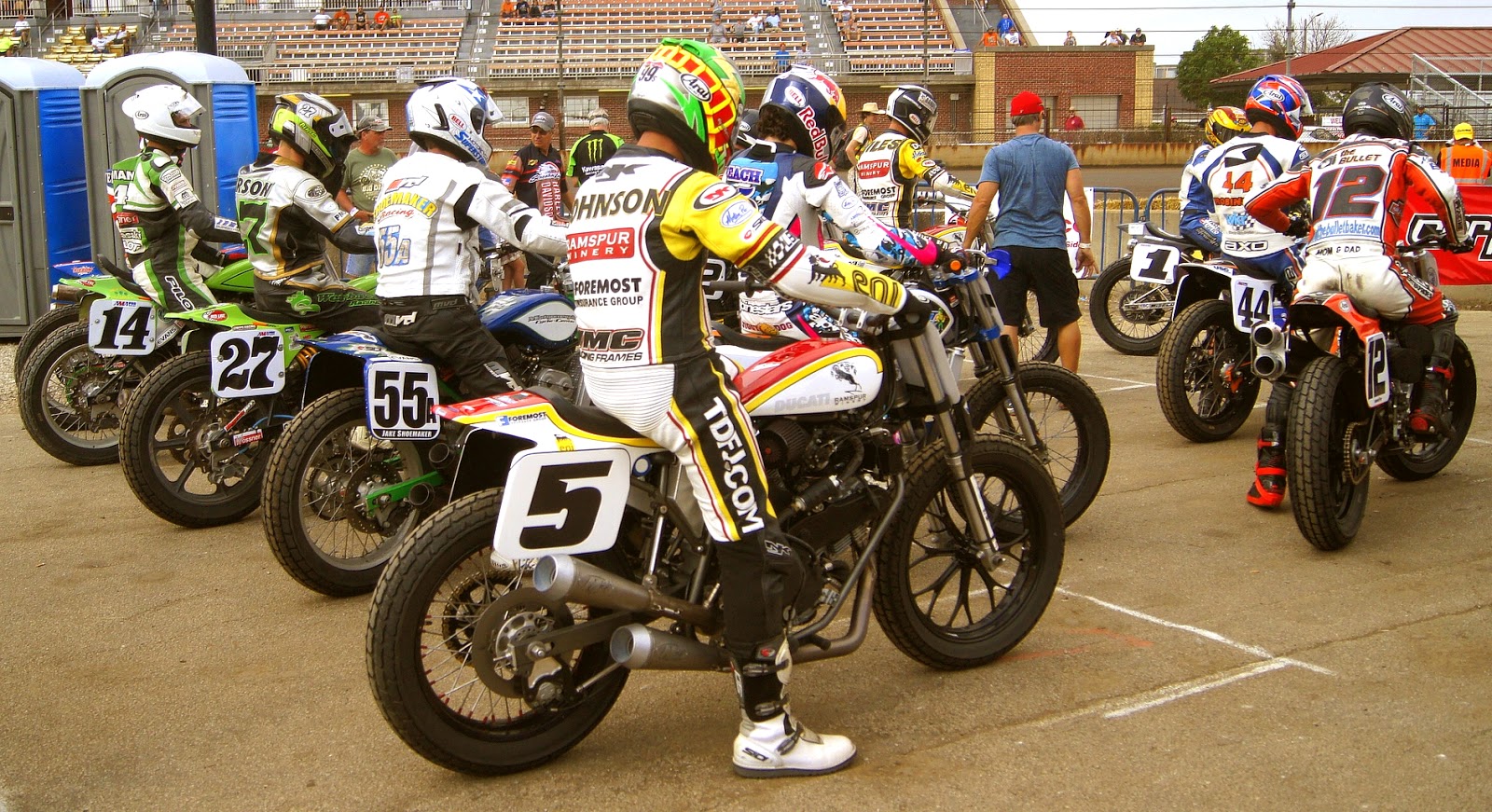 With just over two months until The Rolling Thunder Show returns to the Cal-Expo Fairgrounds, now is the time to make your plans and get your tickets in hand as they will surely go fast and the event will undoubtedly be standing room only, as most of the big west coast venues usually are.

In the shot above, riders get ready to hit the track for the first time for the day at the Springfield Mile II in round 11 of the 2013 AMA Pro Flat Track Grand National Championship at the Illinois State Fairgrounds.

(Back row) Briar Bauman on the #14 Monster Energy/Werner-Springsteen Racing Kawasaki, Rob Pearson on the #27 Weirbach Racing/Werner-Springsteen Racing Kawasaki, eventual Rookie of the Year Jake Shoemaker on his #55A Montgomeryville Cycle Center/Motion Pro Kawasaki, JD Beach on the #95 TJ Burnett Farms/Red Bull Kawasaki, and Jake Johnson on the #5 Lloyd Brothers Motorsports/Ramspur Winery Ducati 1098/1100 (no, it's NOT a 749 folks!) all get ready to head out for their first spin on the mile oval at the house of speed in Springfield.

With the overall lack of west coast events being a hot topic, especially with the starving fans who readily support the greatest racing show on two wheels in the world in that area, now is the time to show your support and pick up your tickets for what will be another barn burner, and to see if Flyin' Bryan Smith can make it four in-a-row at the Sacto Mile!

You can check out the full press release below to see what you need to do to get your hands on some hot seats for this late July stop on The Rolling Thunder Show, as we all get ready to see the big bikes burn rubber and smoke out the competition this Sunday as the restrictors come off for the first time and the Twins Series roars into town in Springfield for the annual trek to the Memorial Day weekend mile at the Illinois State Fairgrounds this Sunday.


Tickets on Sale for the 2014 Sacramento Mile
The 49th Running of the Historic AMA Pro Grand National Championship is on Saturday, July 26, 2014
SACRAMENTO, Calif. (May 22, 2014) – Tickets are now on sale for the 2014 edition of the Sacramento Mile, which takes place this year on Saturday, July 26, 2014, at Cal Expo in Sacramento, California. Tickets for this year’s race can now be purchased online at https://secure.interactiveticketing.com/a/c84136.
You can also call 1-844-SAC MILE (1-844-722-6453) to purchase tickets and get additional event information.
This year will be the 49th running of the race with one of the richest traditions in the AMA Pro Grand National Championship. Leading riders and teams from across the country will converge on Cal Expo, all in hopes of coming away champion of the 2014 Sacramento Mile.
The event is making a special offer for free standing room only tickets to children 12 years old and under, and all other ticket prices for children 12 years old and under will be 50% off. Also, Sacramento Mile attendees that arrive by motorcycle will park for free. Additionally, your 2014 Sacramento Mile ticket includes admission to the California State Fair for Saturday, July 26th.
Discounts are available at various motorcycle dealerships, retail stores, select upcoming motorsports events, subscribers to our e-newsletter, and more. Check our website for details on how to secure your discount code.
Visit the website: www.SactoMile.com to keep up to date with the latest news concerning the 2014 edition of the race.
This is the 49th running of the Sacramento Mile. The race, which first ran in 1959, is one of the most tradition-filled events on the AMA Pro Grand National Championship calendar. This year fans have the opportunity to potentially see history in the making. Michigan’s Bryan Smith is slated to return and try to win a fourth-straight Sacramento Mile. That would mark the longest winning streak in the history of the race.
“I look at Sacramento as a home away from home,” Smith said. “That race has always been good to me. To have a chance to be the first to win four in a row there is a real honor, especially considering all the great riders who’ve raced Sacramento over the years.”
The past Sacramento Mile winners Smith refers to reads like a Who’s Who of American motorcycle racing. The legendary Carroll Resweber was the first to taste victory at Sacramento, when he rode his factory Harley-Davidson to victory in the AMA Grand National held at the track on July 19, 1959. Since then Motorcycle Hall of Famers such as Joe Leonard, Gary Nixon, Hank Scott, Jay Springsteen, Ricky Graham, Bubba Shobert, Scott Parker and Chris Carr have all stood atop the Sacramento Mile podium. 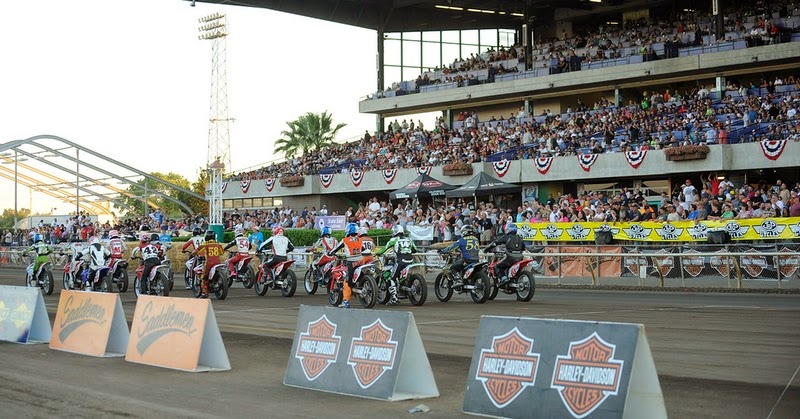 Riders get ready to roll in the AMA Pro Flat Track Pro Singles Series at the Sacramento Mile in July 2013. As was announced last week, the Sacto Mile will return again on July 26, 2014 and tickets went on sale today for round 8 of the 2014 AMA Pro Flat Track Grand National Championship at the Cal-Expo Fairgrounds. Photo courtesy of AMA Pro Flat Track, by Dave Hoenig.
Fans will also have the unique opportunity this year to witness female racing sensation Shayna Texter make her Sacramento Mile Grand National Championship debut. Texter, who twice won the Pro Singles support class race at Sacramento, is hoping to make history as the first woman ever to win an AMA Pro Grand National Championship race. And she is hoping to resurrect Triumph’s fortune in GNC racing. The last a Triumph motorcycle to win the Sacramento Mile was 50 years ago when the late great Gary Nixon rode the British-made machine to victory in 1964.
The AMA Pro Grand National Championship series is one of the longest running motorcycle racing championships in the world. Known by its fans as flat track racing, many consider this form of motorcycle racing the most exciting on the planet. On the long straights of the Sacramento Mile top speeds can reach 130 miles per hour and, running just inches apart, riders then broadslide their machines into the turns at triple-digit speed, controlling their arc through by throttling up and spinning their bike’s rear wheel, all of this on a racing surface made of dirt! Flat track racing has produced many of America’s Motorcycle Grand Prix Champions such as Kenny Roberts, Eddie Lawson, Wayne Rainey, Kenny Roberts, Jr. and Nicky Hayden.
Practice for the Sacramento Mile begins at on Saturday, July 26 at 2:15 p.m. and opening ceremonies for the evening program kick off at 6:15 p.m.
Visit us at: http://www.sactomile.com/
Via Facebook: https://www.facebook.com/SactoMile
Twitter: https://twitter.com/sactomile
YouTube: http://www.youtube.com/user/sactomile
---
*** 2014 Ticket Information: Ticket information is available for the July 26, 2014 Sacramento Mile at www.sactomile.com.***
Fans can order tickets online  at https://secure.interactiveticketing.com/a/c84136, by calling 1-844 SAC MILE (1-844- 722-6453) or by visiting the Cal Expo Ticket Box Office beginning June 23rd in the Administration Building at 1600 Exposition Blvd., Sacramento, CA 95815 from 10 a.m.-5 p.m. (PT) Monday through Friday. Tickets can also be purchased at any ticket window during the 2014 California State Fair.
Tickets for groups of 20 or more also are available. Contact the Cal Expo Group Sales Department at boxoffice@calexpo.com for more information. 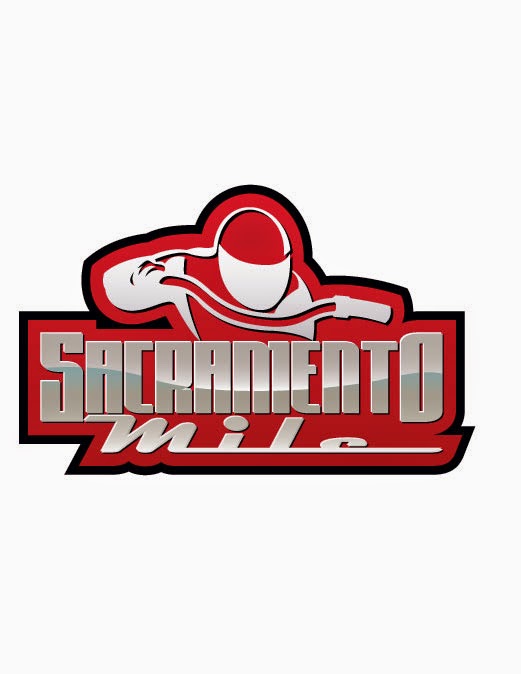