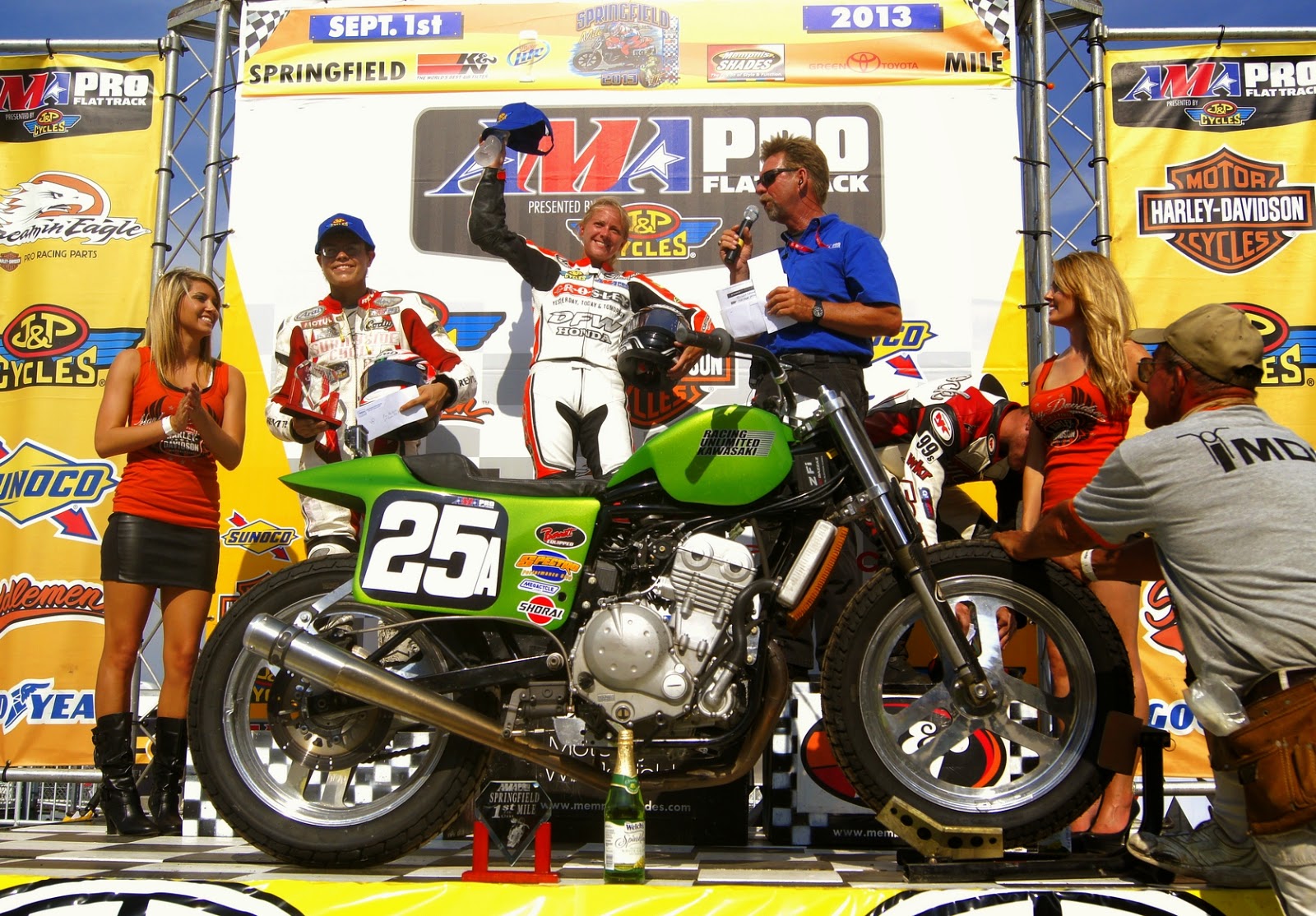 AMA Pro Flat Track along with Dunlop & Mr. Sign upped the ante for the 2014 AMA Pro Flat Track Grand National Championship season late yesterday with the announcement that a new fastest rider award will be presented in the Expert and Pro Series events at each of the six mile races this season.

Beginning with tomorrow's first Twins Series event of the year at the Springfield Mile I, the rider with the fastest lap at each of the Grand National mile races this season will be gifted with a new set of Dunlop CD-series tires for their efforts. With current tire prices what they are for the teams and riders, that amounts to the equivalent of roughly $410/set, which may not seem like a lot of extra dough, but in terms of extra costs incurred during a normal season of racing, every little bit helps and this is a great step in helping out the teams and riders with event costs to participate.

In the shot above, the talented Shayna Texter gives the fans her million dollar smile after taking the first of her two wins in the Basic Twins Series race at the Springfield Mile I on August 31 in round 10 of the 2013 AMA Pro Flat Track Grand National Championship season.

Aboard the #25A Racing Unlimited/Crosley Radio Kawasaki, the little gal from Pennsylvania with a boat load of talent ran away with the first win in the newly-created series in front of a packed house at the Illinois State Fairgrounds over the Labor Day weekend last season. Shayna will be making her Expert Twins Series debut tomorrow aboard the factory-backed Latus Motorsports Triumph Bonneville, and will be looking to put it on the boys in what will be a great day of racing at the iconic church of speed at the Illinois State capital track.

Check out the full press release below from AMA Pro Flat Track as we get ready to watch the action tomorrow as the teams, sponsors, riders and fans flock to Springfield for the big season opener for The Rolling Thunder Show's big bikes.

The Dunlop "Accelerate Your Soul Award" Presented by Mr. Sign to be Awarded to Select AMA Pro Flat Track Riders Throughout 2014 Season