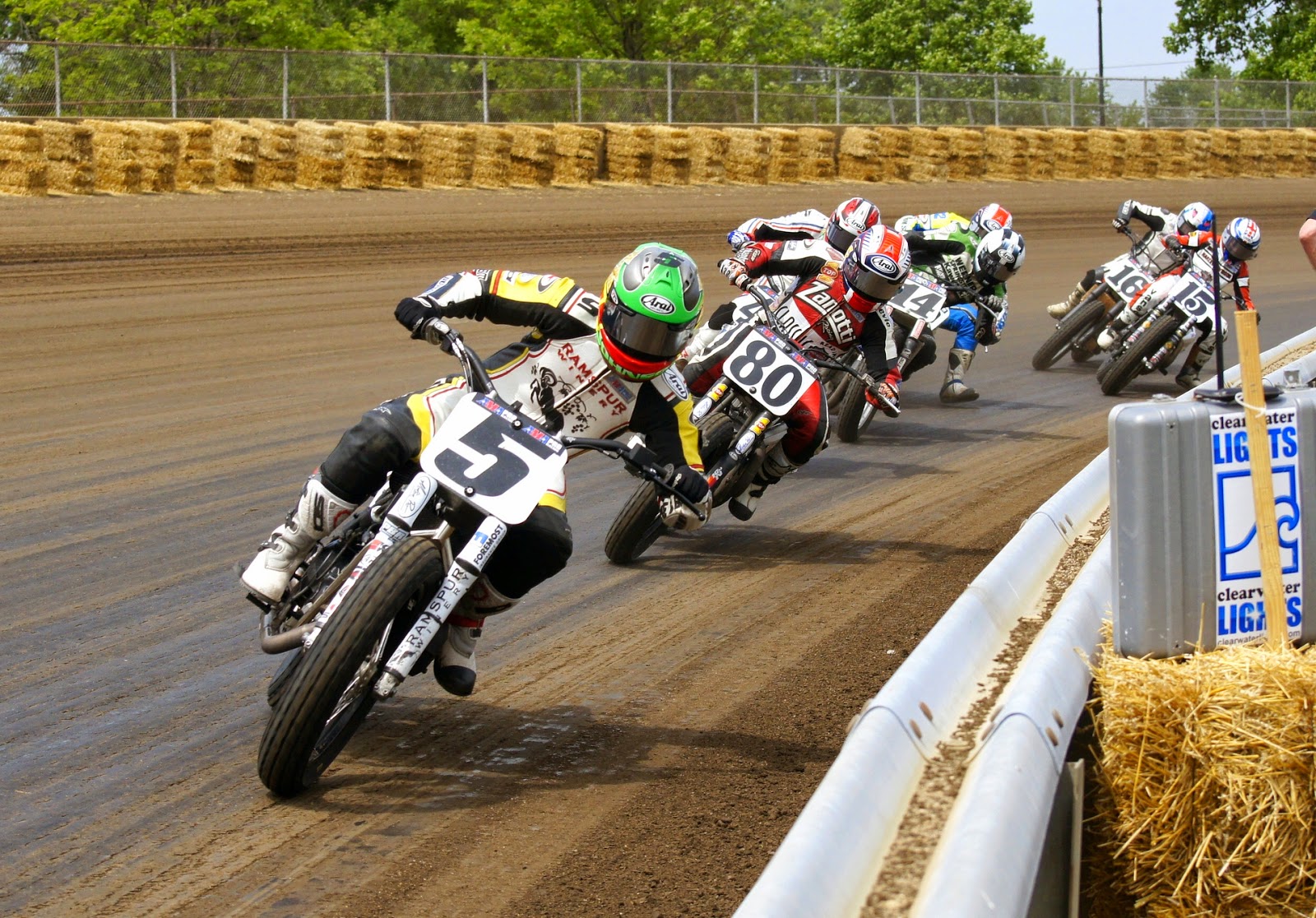 Round 3 of the 2014 AMA Pro Flat Track Grand National Championship saw the first appearance of the Twins Series machines sans restrictors for the first time in over 2-1/2 decades, and did the racing ever turn out great for the fans, teams and sponsors of The Rolling Thunder Show.

Although some pundits may say 'well, a Kawasaki still won.....,' those that were there and that are in the know were treated to some of the best and closest racing the series has seen for years, and without a doubt were party to one of the greatest races they have ever witnessed. And there was no doubt that the parity was there amongst the ranks of the XR's, the big Duc and the Kawis.

One of the teams and riders that were able to claim a distinct advantage due to losing the fuel restrictions that were in place before this season was the Lloyd Brothers Motorsports team and their star rider, 2-Time AMA Grand National Champion Jake Johnson.

Tuner to the stars Brent Armbruster had the big #5 Lloyd Brothers Motorsports/Ramspur Winery/Parkinson Brothers Racing-sponsored 1098/1100 on song, and Jersey Jake took full advantage of Armbruster's and the team's tuning and suspension prowess throughout the day at the Illinois State Fairgrounds. The final tally will say that winner Bryan Smith led 20 laps of the 25-lap National main at the stripe on the Villa-Esparza/Crosley Radio Kawi, while Johnson led four laps and runner-up finisher Kenny Coolbeth, Jr. led a single lap on the Zanotti Racing XR-750. But Johnson was able to get the runs necessary in order to draft to and at the front in order to get the big Duc up there, largely thanks to the vast resource of knowledge that his crew chief and wrench spinning master put into his mount. And once they get the final chassis settings put into place that they need in order to get their mount just a tad more stable, the rest better look out.

During heat race #2 as shown above, Johnson can be seen leading the pack out of turn four in the 8-lap affair, one in which he won in the end, but not without a strong fight from Brandon Robinson on the #44 USC Kawasaki/Hart Racing/Hot Shot-sponsored mount. Jake took off with the lead in the early stages and looked to have it wrapped before the rest caught up and Robinson had worked his way around Steve Bonsey on the #80 Zanotti Racing/Classic Harley-Davidson/Top 1 Oil-backed XR.

Once Robinson got around Bonsey, he set sail for Johnson, and by lap 7 was right on his heels. By the time they had gotten around to turn 3, Robinson had passed the big #5 in spite of Jake's prowess, and looked to have the heat win. But coming out of four, Johnson poured the coals to the Italian 'L' twin and nipped BRob44 at the line....by .014 seconds, or roughly half a wheel, but enough to take the win and lead them both into the Dash for Cash bonus round. Quite the exciting start to the day for the team, and for the fans who saw this great duel with a couple of experienced and clean-riding veterans. It sure had my adrenaline flowing!

Seen in the shot above, Johnson leads as Bonsey keeps it close, with Robinson barely visible behind the Zanotti Racing #80 machine. Close on their heels is Briar Bauman on the #14 Werner-Springsteen/Monster Energy/Cometic Gasket Kawasaki, Shawn Baer on his #32 Baer Racing Products/KB 5/Karn's Performance-backed KTM LC8 950, Nichole Cheza-Mees on the #15 Harley-Davidson/Black Hills H-D/Mr. Sign-backed XR and Wyatt Maguire on the #16 Kirkland Racing/Urban Custom Bikes/Motorcycle-Superstore-sponsored Suzuki SV650. Behind Johnson and Robinson, Bonsey and Baer took the final direct transfers to the National main and the rest were left to duke it out in the semi later in the afternoon.

All in all, it was great day of racing, but Jake Johnson and the Lloyd Brothers Motorsports/Parkinson Brothers Racing/Ramspur Winery team took a big step in garnering their 4th-place finish for the day, and coupled with their great results from Daytona, left Springfield in 2nd-place in the points, just 2 points behind early points leader Coolbeth (53-51) heading into round 4 at the Knoxville Half-Mile in Knoxville, Iowa on June 15. And Jake has that famous smile back on his face that shows he, and the team, are back 'having fun again,' just like he and team owner Dave Lloyd talked about early Sunday after qualifying was over. If Sunday's results are any indication of what the season holds for this great and deserving bunch of guys, it's going to be a super season for them.

Bravo to the boys and girls at LBM/PBR for their excellent effort and results from Sunday, and you can check out their race report below to get it straight from the horse's--or horsepower's--mouth! 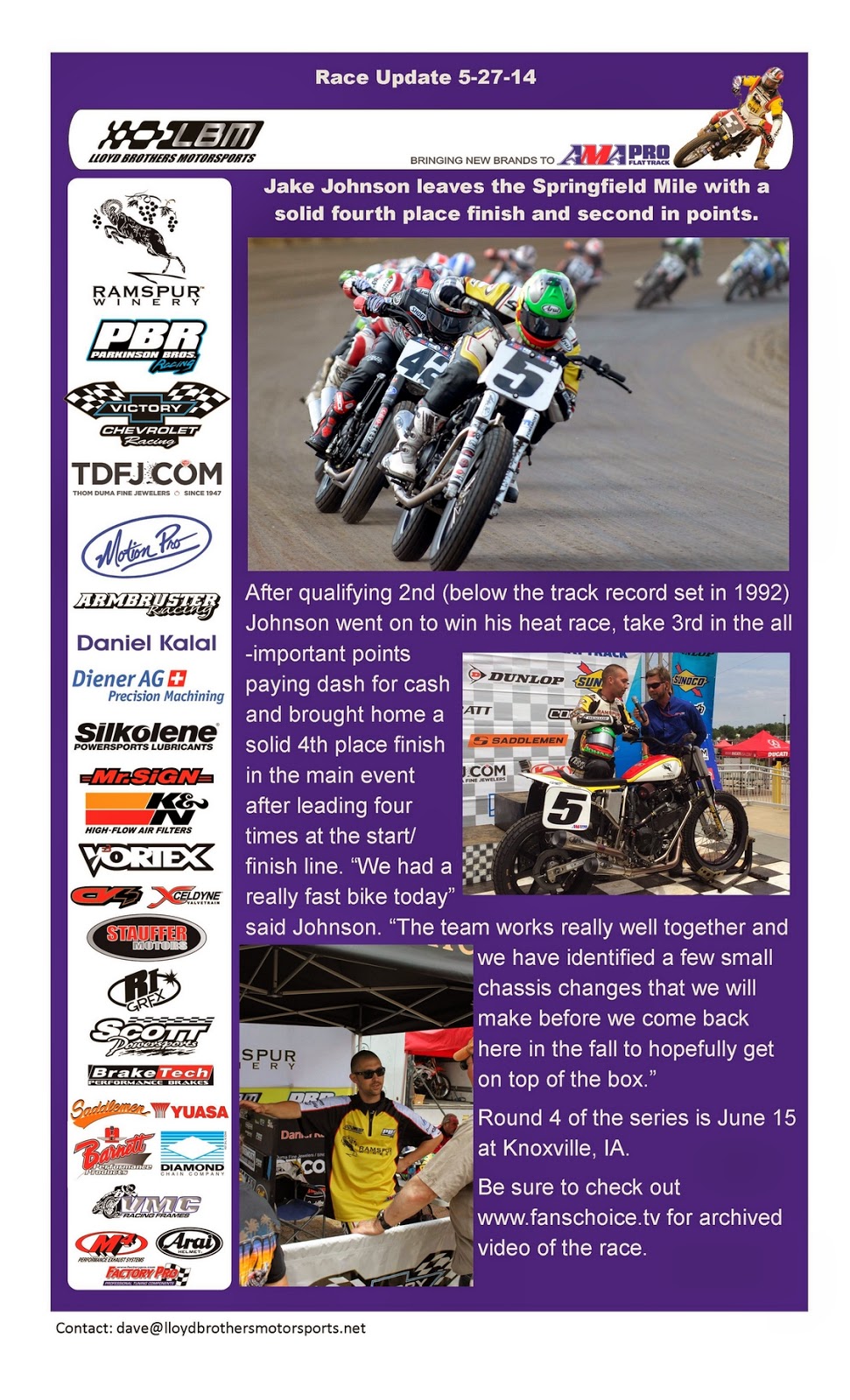