DAYTONA BEACH, Fla. (November 26, 2013) - AMA Pro Racing announced today a new format for AMA Pro Road Racing event weekends which will be in effect during select events scheduled as part of the 2014 season. This alternate weekend schedule was created as a cost-containment effort in coordination with the teams, manufacturers and promoters.
"Although the weekend format will be condensed at certain events in 2014, fans can still expect the same great racing action and entertainment value from our valued promoter partners," said Michael Gentry, Chief Operating Officer of AMA Pro Racing. "We're thankful for the valuable input we have received from our major stakeholders as we have formulated this plan and look forward to debuting the new format to the fans next season."
Of the events already announced as part of the 2014 AMA Pro Road Racing calendar, New Jersey Motorsports Park will feature the new format, and the track is already working on plans to deliver the same excellent fan experience to those in attendance. 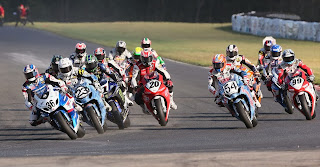 Martin Cardenas on the #36 Yoshimura Factory Suzuki GSX-R1000 leads the field during race one of the AMA Pro National Guard SuperBike Series at NJMP on September 14, 2013. New Jersey Motorsports Park will host one of the 'abbreviated' race weekends as announced today for the 2014 season. AMA Pro Road Racing photo by Brian J. Nelson.
"New Jersey Motorsports Park is excited to be a part of this new weekend format which will allow our fans to take part in non-stop racing excitement condensed into two days," said Brad Scott, Chief Operating Officer / GM of New Jersey Motorsports Park. "This unique doubleheader race weekend will be packed with both on-track and off-track activities from Saturday morning to late Sunday afternoon."
The 2014 AMA Pro Road Racing season will kick off once again at Daytona International Speedway. The event is scheduled for March 13 - 15, 2014 and will have the same three-day format featured in recent years, highlighted by the 73rd running of the DAYTONA 200 on Saturday afternoon.  For tickets and information, please visit http://www.daytonainternationalspeedway.com.