The IMDA announced on Friday that the Basic Twins Class will be returning to the program for the Springfield Mile I over the Memorial Day weekend on May 25, 2014 as part of the annual spring trek to the Illinois State Fairgrounds by AMA Pro Flat Track.

The series, which was announced originally back in April '13, incorporates a 'slimmed down' version of the Twins Series class as seen and raced by the Experts. It made it's debut during the Springfield Mile I & II rounds over the Labor Day weekend and proved to be a very competitive series (after you take away the runaway wins by Pro Singles phenom Shayna Texter on the Crosley Radio/Racing Unlimited Kawasaki.)

In the shot above, Shayna on the #25A Crosley Radio/Racing Unlimited Kawasaki leads Justin Zeigler on the #89F Ben Breece Harley-Davidson/Zeigler's Garage-sponsored XR750 with eventual 2nd-place finisher Cody Johncox on the #96B Sunnyside Cycle/Top Gun Construction-backed XR working to keep Streaking Shayna in sight during heat race 1 at the Springfield Mile II on September 1. The series made it's debut during rounds 10 & 11 of the 2013 AMA Pro Flat Track presented by J&P Cycles Grand National Championship. 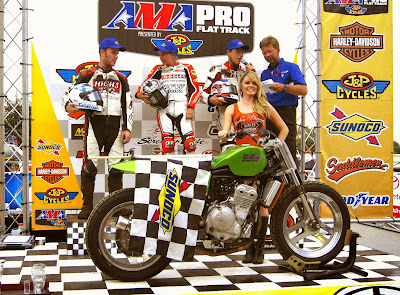 3rd-place finisher Jason Isennock, Shayna Texter and 2nd-place finisher Cody Johncox stand on the podium while Johncox is interviewed by AMA Pro Flat Track announcer Barry Boone after the 12-lap main event in the Basic Twins Class in race two of the series' debut at the Springfield Mile doubleheader round over the Labor Day Weekend.

Texter took her two-off ride on the #25A Racing Unlimited Kawasaki and turned the wick up for both wins over the weekend to show she more than has what it takes to compete on a big bike after campaigning the Pro Singles Championship series in the last five seasons.

You can check out the full press release below courtesy of the IMDA, and make sure to get the date set on your calendar for what will be another great weekend at the mecca of speed on the Illinois State Fairgrounds mile oval as The Rolling Thunder Show returns for another season of racing in the fight for the 2014 AMA Pro Flat Track Grand National Championship.


Press release courtesy of the IMDA

AMA Pro Flat Track Set to Bring Back Basic Twins Class on May 25, 2014 for Springfield Mile

SPRINGFIELD, Ill. (November 22, 2013) - It wouldn't be a complete season if AMA Pro Flat Track didn't visit Springfield, Ill. The legendary Springfield Mile has served as one of the most historic venues and is considered to be one of the most coveted wins on the circuit. In addition to the usual AMA Pro Grand National Experts races set to be held, the AMA Pro Basic Twins class will also roll off the trucks at the Illinois State Fairgrounds on May 25, 2014, and this go-around is sure to add even more excitement to the legacy of the storied event.

Last season marked the debut of the AMA Pro Basic Twins class. A class specifically designed for Pro Singles riders that have the aspiration of one day competing at the Grand National Expert level. The stepping stone division provides a way for the Pro Singles riders to get a feel for the powerful twin-cylinder motorcycles at the professional level without the added pressure of competing against the already proven Grand National Experts.

In both of her opportunities, Shayna Texter excelled in AMA Pro Basic Twins competition, winning both races by a combined 15.691 seconds on her Crosley Radio Kawasaki. Texter's monster victories proved it's only a matter of time before the female phenomenon graduates to the elite Grand National Expert level.

Texter's domination in Basic Twins at Springfield last season was partially overshadowed by Brandon Robinson's two Grand National Expert victories at the iconic venue. Robinson's sweep also came on a Kawasaki and the Oxford, Penn. native catapulted himself into the championship picture as the 2013 season came to a close.

Though Robinson came up a little short in the Grand National Championship, finishing third in the overall final point standings, his two victories at Springfield last season, along with his early-season win at Daytona to start the year, helped him collect more wins than any Grand National Expert rider in 2013.

The event will be the first of two scheduled races at Springfield, with the second set to run on Labor Day Weekend of 2014. For tickets and more information, please visit http://www.illinoismda.com/ or call 217-753-8866.