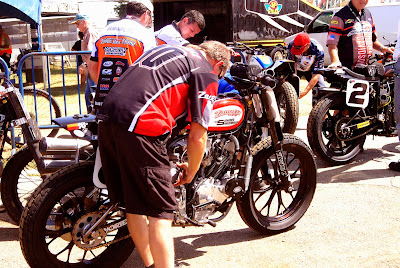 In what amounts to a big change as well as an earlier than normal release, AMA Pro Flat Track late yesterday released the updated technical rules for the 2014 AMA Pro Flat Track Grand National Championship season. And the big news that will without a doubt will/should silence all of the bickering and complaining that has occurred for the last several seasons, sees the loss and complete removal of ALL restrictor rules/regs in the Expert Twins Series class effective for the new season ahead.

One of the most common complaints heard throughout the paddock and the track over the course of the last several seasons, and for that matter even dating back to what some consider the 'hey day' of flat track racing in the mid-late '80s when Honda was dominating the sport, has been the use of various size restrictor plates in order to level the competition playing field.  AMA Pro Flat Track opened up the allowable opening for the XR750 teams with the use of 32mm restrictors for the half-mile tracks and 33mm restrictors for the mile tracks for the 2013 season (with a special formula used for teams running larger than 750cc and up to 1250cc for other machinery), but the 2014 season will see the restrictors completely removed for all machines on both size tracks.

This will undoubtedly be met with applause, especially from the XR750 camp, many of whom have complained of being able to keep in the draft, especially on the mile venues, with the hot Kawasaki mounts. However, as one team owner mentioned to me several years ago, 'no matter what size motor you are running' or how much power that mount may be putting out, you still have to get it to the ground. And with the spec tire currently being used in AMA Pro Flat Track will most surely be the final and lasting, deciding factor in not only getting that power to the ground, but managing that tire wear, as well.

However, this will be a great step all around for all comers and all campaigners in The Rolling Thunder Show, whether it be the teams running the Triumph 955-based mounts, the Suzuki 1000, KTM 950/990s or the Ducati 1098/1100 platforms, as it will allow each of these manufacturers and team's engines to breath freely and move any and all guess work to tire wear and a more finely tuned suspension setting in order to harness that free-breathing motor and properly supplant it to the track.

In the shot above, Zanotti Racing crew chief Ted McDermitt pulls the K&N air filters off of the #80 Zanotti Racing/RGR/Arai-backed Harley-Davidson XR750 of rider Steve Bonsey after the end of practice at the Springfield Mile I on August 31 during round 10 of the 2013 AMA Pro Flat Track presented by J&P Cycles Grand National Championship, in order to allow the AMA Pro Flat Track tech crew to measure the restrictor size for the day's events.

Also seen in this shot just behind Zanotti's McDermitt are the father and son duo of Dave and Kevin Atherton of the 2013 AMA Grand National Championship-winning Dodge Brothers Racing team of rider Brad Baker, Jared Mees' team working on removing the breathers from the #1 Rogers Racing team's XR, and one of the team cohorts from the Harley-Davidson Motor Company-sponsored #2 XR of rider Kenny Coolbeth, Jr. with the breathers removed and allowing a good look down the throat of the flat slide carbs on The King of Cool's factory mount.

There are a few other 'minor' tweaks that have been made to the new rulebook, but the leveling of the playing field with the loss or 'banning' of all restrictors in AMA Pro Flat Track competition for the 2014 season is the biggest move and change for everyone. And a big tip of the helmet to AMA Pro Flat Track for getting the rulebook out some five weeks earlier than what we saw in the release of the 2013 season rules in mid-December of 2012. Bravo guys!

You can check out the link below to the new rules as released by the folks on Fentress Blvd. in Daytona from late last evening below, as we get ready to 'weather' the cold winter months ahead while awaiting the release of the 2014 season schedule, reportedly being released 'very soon.'

A redline version of the 2014 AMA Pro Flat Track Technical Rules has been made available on the competitor information section of amaproracing.com.
The 2014 redline technical rules document includes deletions from the 2013 rule book in strike-through font and all additions and modifications noted in red for additional clarification.
A direct link to the file follows:
If you are unable to open PDFs on AMA Pro Racing's website, please do the following:
AMA Pro Racing Competition Department