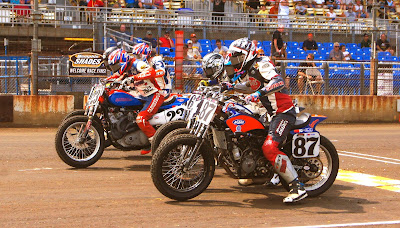 AMA Pro Flat Track has released the online DVR feeds for round 13 of the 2013 AMA Pro Flat Track presented by J&P Cycles Grand National Championship from the Law Tigers Flat Track Finals at the L.A. County Fairplex from the Pomona Half-Mile on October 12, and man what another great effort from Will Fulford of The Fast and Dirty.com in putting together a superb broadcast.

The 2013 season-finale saw Brad Baker capture the 2013 AMA Grand National Championship in a raging on-track battle with title rival Bryan Smith as they both pulled off some great moves while battling it out on the 5/8ths mile venue on the left coast, with (no spoilers here since this was last month) Baker pulling out all the stops on his #12 Dodge Brothers Racing XR750 to take the 2nd win of his career over Smith on the #42 Crosley/Howerton Racing Kawasaki.

With each battling for the lead at the front and shadowing one another throughout, the race at Pomona was a classic example of some of the best racing this season in a year filled with great action and some classic battles and does a superb job of showcasing The Rolling Thunder Show and why it provides the best racing on two wheels in the world. Both riders used all of the track in going back and forth, from inside line to outside line in going full bore for the win and the overall title at stake.

And with the top-4 going at it tooth and nail just before the half-way point and throughout the rest of the race, Jared Mees on the #1 Rogers Racing XR and Briar Bauman on the #14 Rod Lake Racing Suzuki 1000 also put in some serious moves all around the track at Pomona. 2013 AMA Grand National Champion probably says it best on the podium after the race that 'that was probably the best racing of the series' this season.

In the shot above from round 11 of the 2013 AMA Pro Flat Track presented by J&P Cycles Grand National Championship, heat race #1 blasts off the line at the Springfield Mile II on September 1, with (from L-R) Brandon Robinson on the #44 TJ Burnett Farms/USC/Hart Racing Kawasaki, Brad Baker on the #12 Dodge Brothers Racing/Sefnco Communications/Specialty Fabrication XR750, Jeffrey Carver, Jr. on the #23 Kiesow Racing/Eddie Adkins/Carver's BBQ XR, Dustin Crow on the #61 Greg Crow Racing/Gardner Racing/H-D of Salina XR, Jared Mees on the #1 Rogers Racing/Blue Springs/Las Vegas H-D XR and Mick Kirkness (who came back to the States from his native Australia to do battle at Peoria, Indy and both Springfields) on the #87 KTM North America/Waters Auto Body/GE Capital KTM LC8 roaring off the line to get the racing action going for the Labor Day weekend event. Robinson continued his weekend tear at the Illinois State Fairgrounds to steal each and every possible win in both day's racing and to take the doubleheader win at Springfield for the first time in years, and also to capture his first-ever Twins Series National main event wins of his rejuvenated career.

So check out what AMA Pro Flat Track has put together for us below as we get ready to head into what will undoubtedly be a long winter after another great year of racing in The Rolling Thunder Show.


DAYTONA BEACH, Fla. (November 7, 2013) - The AMA Pro Live streaming broadcasts from the Law Tigers Flat Track Finals at the L.A. County Fairplex are now available for streaming on the AMA Pro Live Online DVR.
The Online DVR is a free service offered by AMA Pro Racing and is available to anyone with an internet connection. Featuring complete race broadcasts, the Online DVR can be accessed from any computer, mobile phone or tablet. To log on and tune in, please visit http://amaprolive.com/ft/dvr.