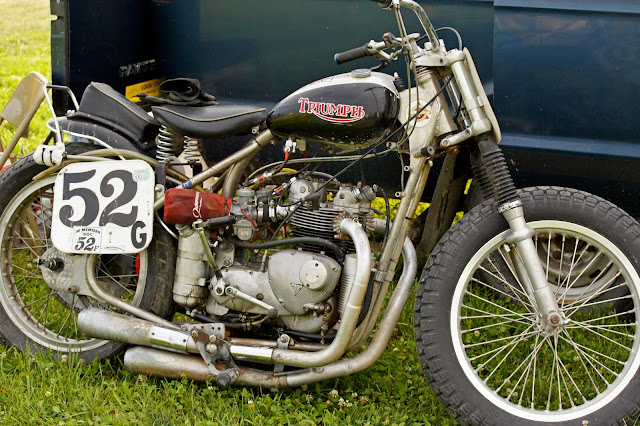 Mid-America Speedway located on Indianapolis' southeast side has released their schedule for the upcoming season.

Unfortunately with the loss of the AMA Pro Flat Track Indy Mile there will no longer be a 'Night Before' or 'Night After' Pro race but they have stepped up with two back-to-back rounds of the AMA Vintage Dirt Track National Championship Series that will hit the track on Friday, August 12 and Saturday, August 13. This will be the third year running for Mid-America to host the AMA Vintage races and should be another great addition to their already heavy schedule for their season ahead.

Of course Mid-America's schedule is heavily laden with a plethora of their local races, but also this year will include them pairing up with the XIIR ice racing series as well as a couple of rounds of indoor dirt tracking in Danville, IL. before the full schedule gets rolling in June.

In the shot above, Paul Bailey's #52G pre-unit Triumph brakeless mount sits inside the pits at Mid-America Speedway during their hosting of the 2015 AMA Vintage Dirt Track National Championship Series round on August 8.

You can check out the full schedule at Mid-America Speedway for the upcoming season below, and if you're in the area make sure you hit up the track during one of their rounds as you won't be disappointed in the little track that could!