As we start to get into the new year, AMA Pro Flat Track announced last week that they have added the Oklahoma City Mile to the still-tentative schedule for the 2016 season, slated to run on Saturday, June 18, marking the return to the OK State for the first time since the 1999 season.

The powers that be out of Daytona Beach continue to make changes to their hierarchy and their forward-looking model in terms of The Rolling Thunder Show. New CEO Michael Lock just last week was on former AMA Pro Flat Track announcer Barry Boone's radio show last week and spoke about a lot of the current changes and the current outlook on the series as it tries to position itself for moving forward. You can hear that show here and get an idea of what the series head man has in mind for the greatest racing show on two wheels in the world.

Probably the biggest missing item though as the series awaits its first events of the season just at two months away (Daytona Short Track doubleheader on March 10-11) is the release of a full season and set schedule.

We do know the main part of the schedule and the returning players for the upcoming season. Besides the doubleheader round at Daytona in March, we do know that both Springfield Mile races will return (May 29, September 4), Lima will be running the final Saturday in June as it has for the last three and-a-half decades (June 25), the Peoria TT (August 14), the Sacto Mile (May 21), the Black Hills Half-Mile (August 9) and the return of the Charlotte Half-Mile (August 27).

The tentative schedule that was originally announced at the end of November during the AMA Pro Flat Track season-finale banquet can be found here: 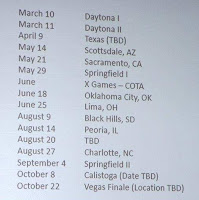 So with adding in the date for the XGames round, a new round in mid-May in Scottsdale, AZ., the recently announced COTA round in early-April, and the currently TBA rounds in Calistoga and Las Vegas, we at least have a very good idea of what to expect for the season ahead. And as last heard and being discussed, the sanctioning body in Daytona was still working on adding another round in central Indiana (and no, still not Indy nor Terre Haute).

In the shot above, riders get ready for the lights to go green for the start of the Lima Half-Mile on Sunday, June 28, 2015.

Shawn Baer on the #32 SBR/Straight Arrow Trucking/Shawn Baer Racing-sponsored KTM LC8 950 and Kyle Johnson on the #77 Parkinson Brothers Racing/Hot Rod Harley-Davidson/Pro 1 Industries-backed Kawasaki make up the final row of riders visible just prior to the start of the 25-lap main event.

So in essence, we do have a schedule in place, and what appears to be almost complete for the upcoming season, which will help most everyone to be able to make their plans for this year's slate of racing, other then a couple of TBAs on dates towards the end of the season and the aforementioned possible central Indiana round. Once the 'official' schedule is brought forth we will have it here for everyone to compare notes on.

In the meantime, check out the press release below thanks to AMA Pro Flat Track concerning the OK City race in June and start marking your calendars!