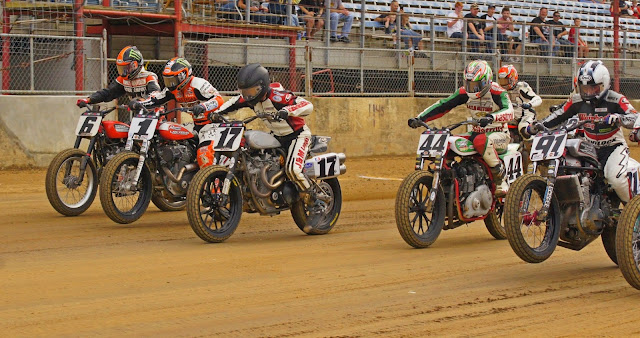 AMA Pro Flat Track released their 2016 schedule late last night, and other then a couple of minor changes and TBAs to it the racing season ahead is mostly what had been talked about and shown forth from late last fall.

As had been put forth and discussed, both Daytona Short Track rounds, the Springfield Mile races, the Peoria TT, Charlotte Half-Mile, the Sacto Mile, Lima Half-Mile and Sturgis Half-Mile all return to this year's upcoming season schedule.

Although this is the latest we have seen the schedule being released (in what seems like ever), new AMA Pro Racing CEO Michael Lock discussed this with Barry Boone on his 'Talking Motorcycles' radio show a couple of weeks ago and made a big point of saying that going forward they want to have the schedule in place by mid-late summer, which would be a much better scenario for especially all of the teams wanting to go after sponsors for their respective budgets for the next season. That in itself would be a major move forward for the sanctioning body that is famous for releasing their schedule very late in the year (in the past five-six seasons previous schedules had been released from late November to early-mid December).

In the shot above, riders roar off the line in heat race #1 at the Indiana State Fairgrounds during the legendary Indy Mile, round 7 of the 2015 AMA Pro Flat Track Grand National Championship Harley-Davidson GNC1 presented by Vance & Hines season on July 11.

With the release of the schedule, fans can now start 'officially' making their plans to attend the races of their choice for the season ahead, with the Daytona Short Track season opening doubleheader just 47 days away.

You can check out the full schedule below in the press release thanks to AMA Pro Flat Track.