Mid-America Speedway in Indy Gears Up for 'Night Before the Indy Mile' Premier Event on Friday, July 10


Mid-America Speedway – Indianapolis, IN. – June 25, 2015 – In what has become a big weekend of stellar racing, Mid-America Speedway on Indianapolis' southeast side will again be showcasing our 'Night Before the Indy Mile' short track event that will feature the stars of AMA Pro Flat Track who will be returning to the AMA Pro Flat Track Grand National Championship Indy Mile round on Saturday, July 11.


Sponsored by Jeff Stevens and Harley-Davidson of Bloomington, IN., the evening's races will see returning riders including last year's Open Pro Class winner and 2013 AMA Grand National Champion Brad Baker, and previous Open Pro Class winner and current AMA Grand National Champion Jared Mees. Other riders expected to return to action at the track located on Indianapolis' southeast side at the Marion County Fairgrounds are Sammy Halbert, Henry Wiles, long-time track regular and Morton, IL. resident Rob 'Bugs' Pearson, Jarod Vanderkooi, and Australian Mick Kirkness, among others. This year's big race will see $1500 going to the winner, and Miriam Deitcher's Flat Track Live and D&D Exhaust will be sponsoring a special 'Dash for Cash' race that will provide $1K to win, and an extra $500 to win if the rider is running a D&D Exhaust system. Riders will be competing on 450cc-class DTX-spec machinery and some will be rolling out their framer mounts, just like Mees did to win the 2011-13 Open Pro Class events. 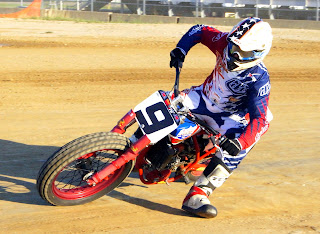 Jared Mees #9 brought along his Lucas Oil Honda framer during his run of winning the 2011-2013 Open Pro Class at Mid-America, but missed the 2014 event in search of his 2014 AMA Grand National Championship. The defending AMA Grand National Champ is expected to return to the Marion County Fairgrounds on Friday, July 10 to try and win again over a stacked field expected at this year's premier event at the 'little track that could.' Photo by Mike 'Stu' Stuhler/Stu's Shots.

Other classes that will be contested at Mid-America during the 'Night Before the Indy Mile' race will be Open Quad, Open Bike, Open Amateur, 50cc, 65cc, 80-200 cc (two or four stroke), Youth, 250cc Money, Vet 30+, Vet 50+, Vintage Light (0-350cc), and Vintage Heavy (351cc+). Note that a rider may enter either Open Pro or Open Amateur, but NOT both. And as a special treat Mike O'Neil will be returning again this year with his fleet of 1949 Indian Arrow 250cc racers for a special race that will see former AMA Grand National greats like Charlie Roberts, Indiana's Jackie Mitchell and current AMA Pro Flat Track sponsor Tommy Duma racing aboard the little singles. 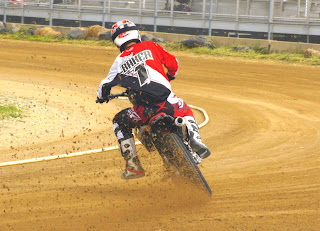 Brad Baker #1 shows the form in early practice at Mid-America Speedway in 2014 that he used on his Brothers Powersports Honda CRF450R to win the Open Pro Class during Mid-America's 'Night After the Indy Mile.' Baker, the 2013 AMA Grand National Champion, is expected to return again in less then two weeks to defend his title. Photo by Mike 'Stu' Stuhler/Stu's Shots.


Mid-America will also be seeing Mike Hacker's RIDE Academy return to the track this year for two special class sessions, the first of which will take place on Sunday, July 12 and see AMA Pro Flat Track riders including Baker, Nichole Mees, Kenny Coolbeth, Ryan Wells, Cody Johncox and Hacker as class instructors. The second time RIDE Academy returns will be on August 10 after the Red Bull Indianapolis MotoGP weekend. Any rider that commits to the July 10th RIDE Academy at Mid-America will receive a complimentary pit-pass for the Night Before the Indy Mile event on July 10th. The RIDE Academy instructors will also be on hand on July 10th to assist riders with any questions that they may have.


Gates open at 2:30 PM EDT, first practice starts at 4:30 PM and the first heat race will roll off the line at 7:00 PM. We hope to see you there for what will again be another exciting and star-studded evening of racing at Mid-America Speedway's 'Night Before the Indy Mile' event at the Marion County Fairgrounds on Indy's southeast side!