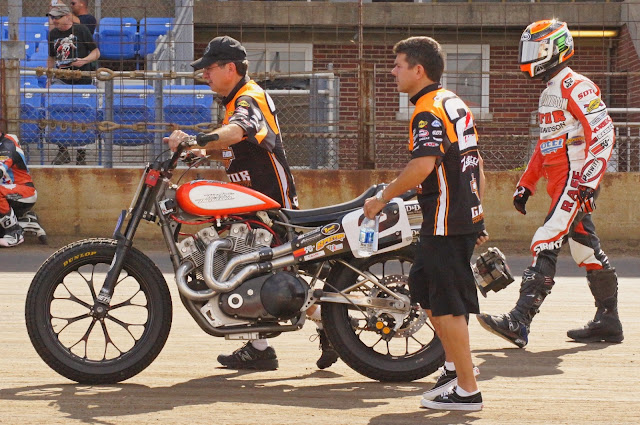 The riders and teams of the 2015 AMA Pro Flat Track Grand National Championship will return to the Charlotte Half-Mile on Saturday, August 29 for the first race held at the facility since the 2002 season. Round 11 of the season will see The Rolling Thunder Show make a stop at the North Carolina track located at the Charlotte Motor Speedway complex 13 days after the Peoria TT and the weekend before the Labor Day weekend running of the Springfield Mile II.

The track last hosted an AMA Grand National event in 2002 in what was the third year of a three year stop on the tour's schedule just after the turn of the century. 3-Time AMA Grand National Twins Champion Kenny Coolbeth, Jr. is the only top-10 ranked rider still active that was racing the last time the series hit the venue, noted for it's hosting of many World of Outlaws sprint car races over the years.

In the shot above, Coolbeth and the #2 Zanotti Racing/Harley-Davidson Motor Co/Gator H-D-sponsored XR750 team, including championship-winning tuner Dave Atherton and his famous and retired son, Kevin Atherton, head towards the grid during the red flag at the Springfield Mile I over the Memorial Day weekend on May 24, 2015. Coolbeth currently sits atop the series standings with a 5-point lead over defending AMA Grand National Champion Jared Mees (67-62 points) after the running of the Sacto Mile on May 30. Last weekend's Hagerstown Half-Mile was rained out with no rain date available.

Check out the full press release below thanks to SMI Promotions, the promoters of the Sacto Mile, the Las Vegas Finals and the upcoming Charlotte Half-Mile on August 29. If you are in the Charlotte area during the last weekend of August, you definitely need to head to the Charlotte Motor Speedway to see the bar banging action in the greatest racing series on two wheels in the world. I guarantee it will be an event that you don't want to miss!

Press release courtesy of SMI Promotions, the promoters of the Sacto Mile and Charlotte Half-Mile.


Charlotte Motor Speedway to host Don Tilley Memorial Charlotte Half-Mile on Aug. 29
CHARLOTTE, NC (June 24, 2015) – After a 13-year absence the AMA Pro Grand National Championships are returning to Charlotte Motor Speedway’s Half-Mile dirt oval with the Don Tilley Memorial Charlotte Half-Mile on Saturday, August 29, 2015. It’s round 11 of the 15-race series, which features the premier event the Harley-Davidson GNC1 presented by Vance & Hines as well as the GNC2 support race. This marks the first time the series has raced at the Dirt Track at Charlotte since 2002, when Kevin Varnes won the Charlotte AMA Grand National on a Harley-Davidson.
This race is named after legendary North Carolina Harley-Davidson motorcycle dealer and race bike builder Don Tilley, who tragically died in an accident last August.
The Dirt Track at Charlotte is a half-mile clay oval on the Charlotte Motor Speedway complex. The Don Tilley Memorial is a return to the early roots of the facility. The track was built in 2000 and one of its first premier events was an AMA Grand National on July 22, 2000, won by Mike Hacker on a Saddlemen Racing/Dodge Brothers Harley-Davidson XR750. The Dirt Track at Charlotte hosted three AMA Grand Nationals from 2000 to 2002. Those nationals were won by Hacker (2000), the late great North Carolina motorcycle racing legend Will Davis (2001) and Varnes (2002). 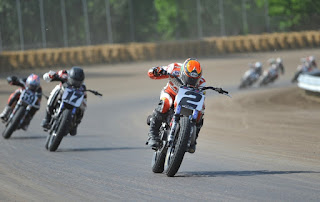 Kenny Coolbeth (No. 2), of Center Hill, Florida, is one of the few riders still in the series today who raced at Charlotte back in the early 2000s. (Larry Lawrence photo/SMI)
After four rounds so far this season it’s Kenny Coolbeth, Jr., leading the AMA Pro Harley-Davidson GNC1 presented by Vance & Hines. Coolbeth, of Center Hill, Florida, is one of the few riders still in the series today who raced at Charlotte back in the early 2000s. Coolbeth leads defending series champ Jared Mees. Both Coolbeth and Mees race Harley-Davidsons. The surprise rider in third in the standings is Triumph rider Brandon Robinson. Robinson is looking to give the Triumph brand its first AMA Grand National victory in 36 years.
The Tilley Memorial is one of the races Coolbeth has circled on his calendar.
“I’m really looking forward to coming back to Charlotte,” Coolbeth said. “I remember it as one of the best Half-Mile tracks we ever visited. The thing that’s really nice about it is that it’s a racy track, there were a lot of different lines and a lot of good passing opportunities.”
Coolbeth twice finished runner-up at Charlotte and he hopes that in the return to the track he can finally score the victory that he was so close to earning.
“I finished second to Will Davis and then the next year to Kevin Varnes,” Coolbeth said. “It would be nice to get a win there. I love the track and it suits my style, so I think I’ll have as good a shot at it as anyone.”
Coolbeth discounts any notion that since he’s raced Charlotte before that he’ll have an advantage.
“It’s been a long time ago now,” he said. “And all the riders pick up on tracks so fast. I don’t think I’ll have any advantage. It’s a wide-open, fast track, so any of a number of riders could do well there. It should be some good racing.”
Coolbeth went on to say he also looks forward to coming back to North Carolina, calling the area the home of some of the most enthusiastic racing fans in the country.
The AMA Pro Grand National Championship series is one of the longest running motorcycle racing championships in the world. Known by its fans as flat track racing, many consider this form of motorcycle racing the most exciting on the planet. On the straightaways of the Dirt Track at Charlotte top speeds can reach 120 miles per hour running just inches apart, then pitching their machines into the turns and controlling their arc by throttling up and spinning their bike’s rear wheel, all of this on a racing surface made of dirt! Flat track racing has produced many of America’s Motorcycle Grand Prix Champions such as Kenny Roberts, Eddie Lawson, Wayne Rainey, Kenny Roberts, Jr. and Nicky Hayden.
Practice for the Don Tilley Memorial Charlotte Half-Mile begins at on Saturday, Aug. 29 at 2:00 p.m. and opening ceremonies for the evening program kick off at 6:00 p.m.
Visit us at: http://www.charlottehalfmile.com/
Via Facebook: https://www.facebook.com/DonTilleyMemCharlotteHM
Twitter: https://twitter.com/tilleymemorial info@charlottehalfmile.com
---
*** 2015 Ticket Information: Ticket information is available for the Aug. 29, 2015 Don Tilley Memorial Charlotte Half-Mile at www.charlottehalfmile.com
Fans can order tickets online at http://www.charlottehalfmile.com/tickets/, by calling the Toll Free Ticket Hotline 1-800-745-3000.
Tickets for groups of 20 or more also are available. Contact the Don Tilley Memorial Charlotte Half-Mile Group Sales Department at info@charlottehalfmile.com  or call 1-844-722-6453 for more information.
###
Larry Lawrence
c. (317) 332-3899
SMI Media Rep
Sacramento Mile - May 30
Charlotte Half Mile - Aug 29
Las Vegas Finals - Nov 20