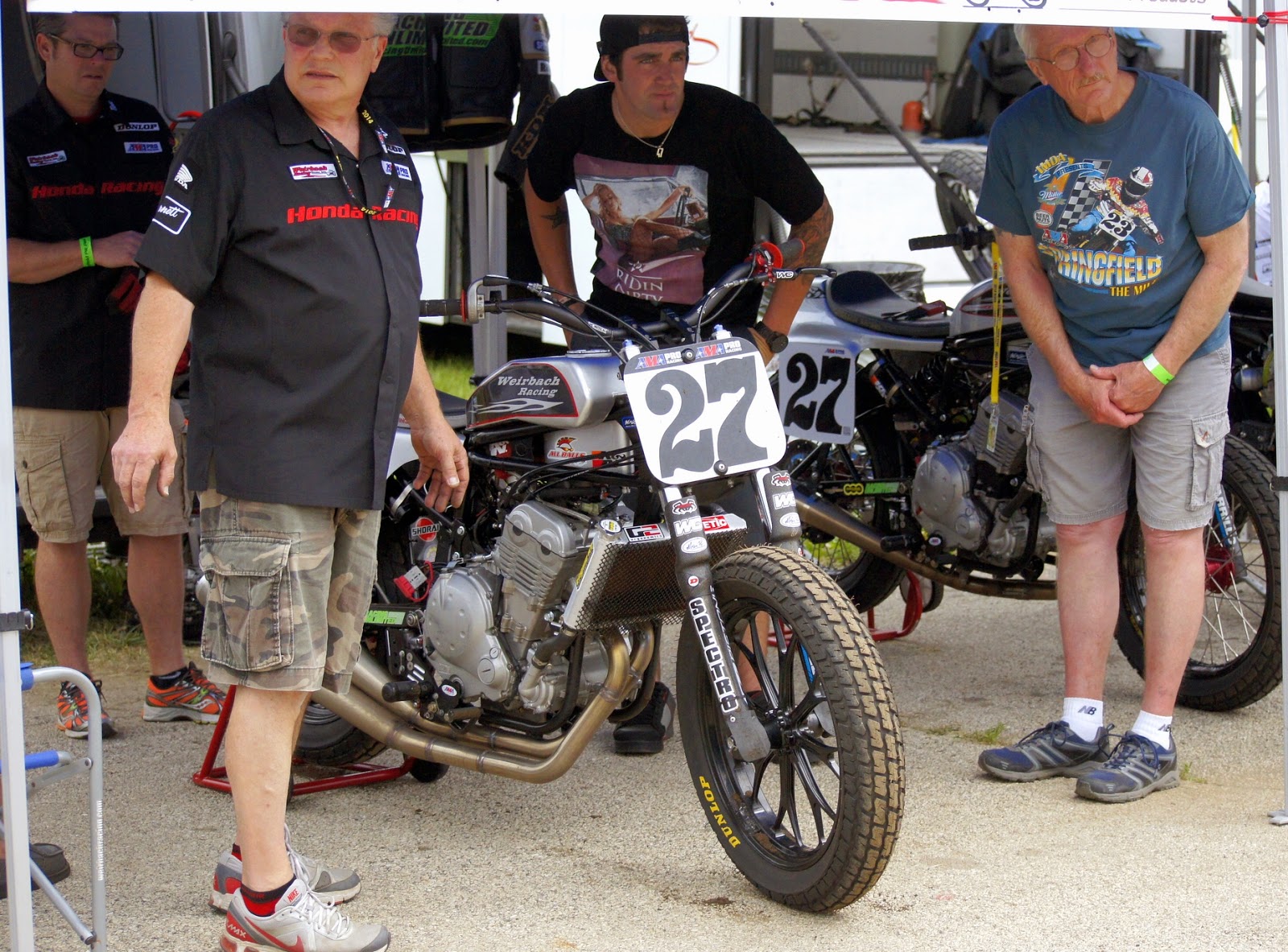 In the shot above, Ted and Richard Weirbach (left and 2nd from left) flank the team's #27 Weirbach Racing/Racing Unlimited-sponsored Kawasaki 750 and 700 during round 3 of the 2014 AMA Pro Flat Track Grand National Championship at the Springfield Mile I on May 25. 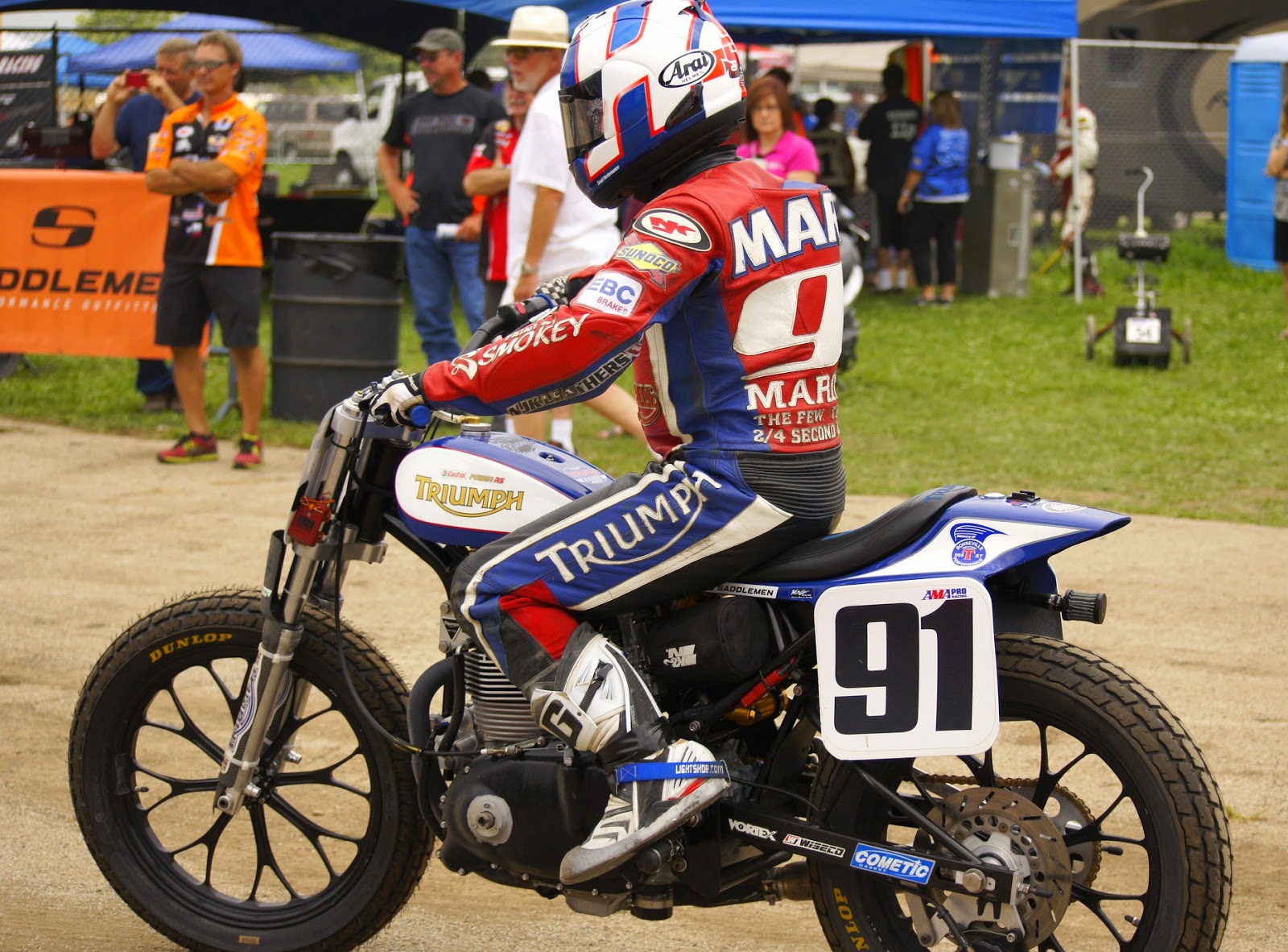 In the shot above, Martin rolls out for the final round of qualifications on the #91 Bonneville Performance/Factory Triumph Racing/Castrol Racing-sponsored Triumph Bonneville during round 14 of the 2014 AMA Pro Flat Track Grand National Championship season at the Springfield Mile II on August 31.

With this week's announcement, this should be great news for fans of the Iowa-based team and Californian Mikey Martin, while reuniting the championship team that is already familiar with one another, making the transition to the team's new Kawasakis somewhat more seamless for the popular rider, and also helping along in developing the bikes around the 2011 AMA Pro Singles Champ.

You can check out the team's official press release below, as we congratulate the Weirbach Racing team and Mikey Martin, and wish them the very best going forward into the 2015 season! 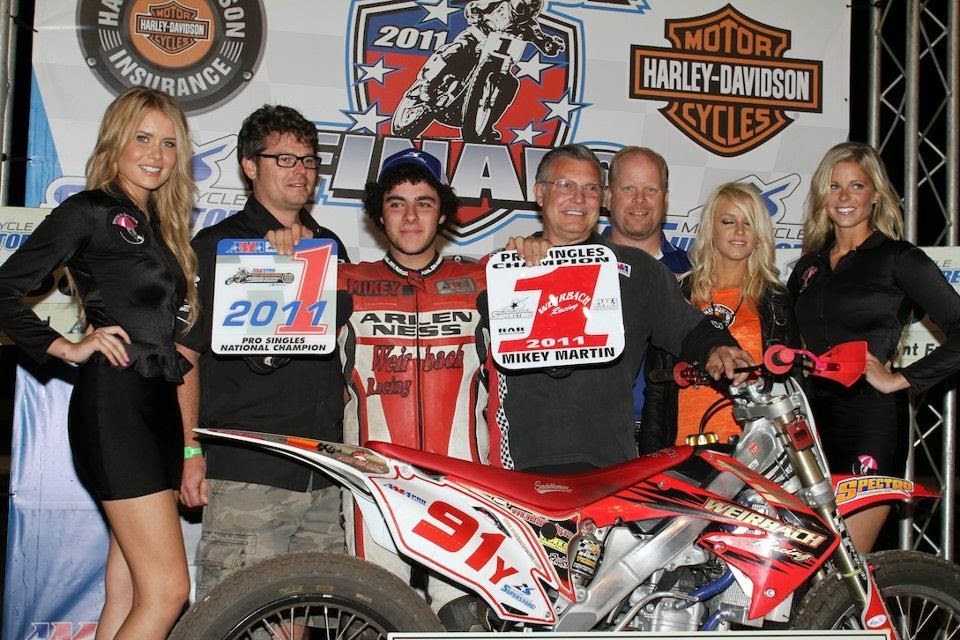 Mikey Martin #91Y is shown with the Iowa-based Weirbach Racing team while celebrating capturing the 2011 AMA Pro Flat Track Pro Singles Championship at the end of the 2011 season at the Pomona Half-Mile on the team's potent Honda CRF450R. The boys out of Iowa announced earlier this week the re-signing of Martin to their 2015 AMA Pro Flat Track Grand National Championship team. Photo courtesy of Weirbach Racing.

Martin, who stepped up to the AMA Pro Expert Ranks in 2012, had been riding for the Bonneville Performance/Castrol/Triumph team until the end of the 2014 season. Looking forward to being back with old friends, Martin had this to say, “I’m looking forward to riding and working again with Dick and Ted. We seem to communicate well and the results speak for themselves. This time around the competition is much tougher than the last time I rode for them in the Pro ranks. We’re up to the challenge for sure!”


After three years, Martin will also be making a brand change from the Triumph to a Kawasaki power plant. Testing will take place for the team prior to the spring opening race at Volusia in March of 2015. This winter they will be building a 3rd Kawasaki and rebuilding the two they already have in their stable.


Team owners Ted and Dick Weirbach also stated, “We are very excited for the return of Martin to ride our Kawasakis, we have two years of experience with the 750’s and feel like we can be a threat at all the Grand National events."