"New Jersey Motorsports Park provided a formidable test for AMA members racing for AMA national No. 1 plates in a number of skill-, age- and displacement-based classes," said AMA Track Racing Manager Ken Saillant. "It's our pleasure to recognize the achievements of all of our national champions, but particularly the outstanding performance of Anthony Mazziotto III from Hammonton, N.J., who earned the AMA Road Racing Horizon Award, amateur road racing's highest honor."

Mazziotto, who won the AMA Youth Road Racer of the Year Award in 2013, returned to the AMA Road Race Grand Championship to win multiple titles in 2014. He won every AMA class he entered on three different bikes, a Yamaha R6, a Suzuki SV650 and a Kawasaki Ninja 250, demonstrating versatility in his first season on a middleweight bike. Mazziotto won the AMA 600 SuperSport and SuperBike classes, as well as AMA Moto 2. 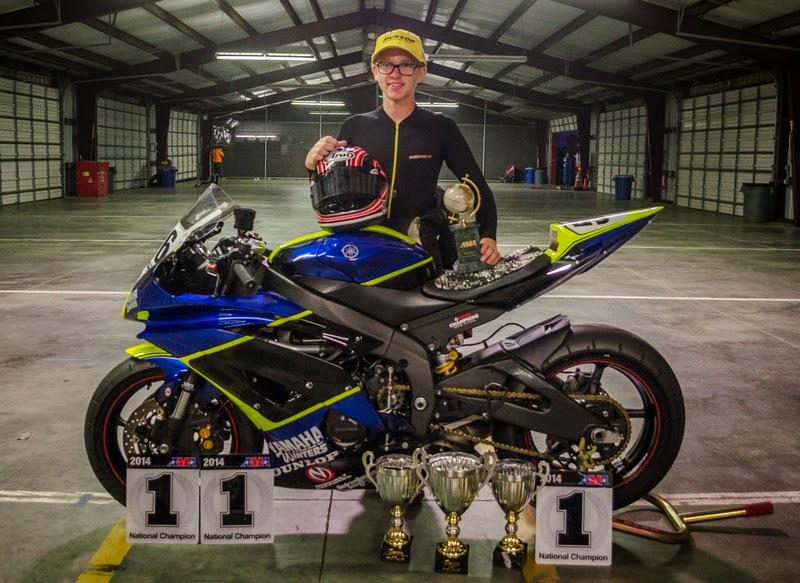 Anthony Mazziotto III is shown with the 2014 AMA Road Racing Horizon Award which he was awarded during the AMA Road Race Grand Championships at NJMP. Photo courtesy of the AMA.

The 2014 AMA Youth Road Racer of the Year was 13-year-old Brandon Paasch. The eighth grader from Freehold, N.J., started riding when he was two and a half. Paasch rode mostly unchallenged over the weekend, winning the AMA Moto 3 class on a Moriwaki 250. Paasch has been dominant all season in the US Grand Prix Riders Union, leading in both the Moto 3 and 250GP classes.

Richard Smith from Wayne, N.J., won the AMA Novice Road Racer of the Year award. Smith started riding track days just over two years ago at the age of 40. He obtained his racing license shortly after, and has been winning races ever since. A prolific competitor, Smith has won more than 30 amateur races in the 2014 season alone. At the AMA Road Race Grand Championship, he won AMA Amateur 1000 SuperSport, AMA Amateur Formula 40, and was second in AMA Amateur 1000 SuperBike on a Honda CBR1000RR.

The AMA Vet/Senior Road Racer of the Year honor went to Eric Helmbach of Bristow, Va. A perennial competitor in both the American Sportbike Racing Association and Team Challenge Series, Helmbach's team is the defending overall and GTO Team Challenge Champion, and is leading both again in 2014 with two races left in the season. Helmbach dominated the field in the AMA Formula 40 race, and finished third in AMA 1000 SuperBike on his BMW S1000RR.