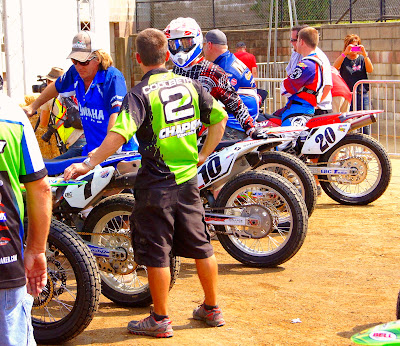 Hacker and Lewis (seated on the #10 Scott Powersports/Saddlemen Seats/Silkolene/Wallace Trucking-sponsored Honda CRF450R) will be opening the 2013 season of RIDE Academy's riding schools next weekend as they take their many years of on and off track experience to the Sunshine State to spend another weekend teaching their skills to a sold-out class at the Marion County Speedway in Ocala, FL.  Also expected to lend a hand in the teaching department is former 3-Time AMA Grand National Twins Champion, Kenny Coolbeth, Jr., who is also a frequent instructor for the riding school.

Also seen in this picture are Willy Halbert (getting Sammy's #7 Frederickstown Yamaha set to go for the first round of practice at the Illinois State Fairgrounds Multipurpose Arena) and 2012 Daytona Short Track II winner, Matt Weidman on his #20 DFW Honda.

Check out the full press release below the next shot, and even though the school is sold out in Ocala, if you're in the area be sure to drop by to take in some of the great action sure to be present with these greats of AMA Pro Flat Track as they teach their tricks to the lucky few who will be in class next weekend! 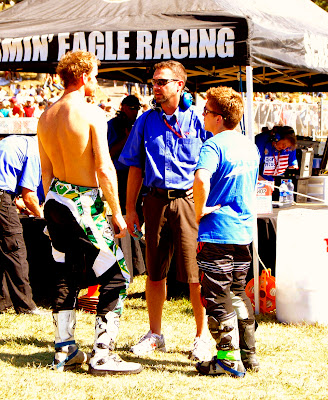 AMA Pro Flat Track Director Dan Johnsen (center) can be seen talking with Australia native Mick Kirkness/AMA Grand National #87 and Sammy Halbert/AMA Grand National #7 at round 14 of the 2011 AMA Pro Flat Track Harley-Davidson Insurance Grand National Championship presented by Motorcycle-Superstore.coms season at the Peoria TT on August 21.  Johnsen, who will be entering his third year as the manager of flat track operations for AMA Pro Racing after taking over the reigns from former '81 AMA Grand National Champion Mike Kidd in early 2011, will make the trip from the DMG offices in Daytona Beach next weekend to sit-in as a student at RIDE Academy's stop at the Ocala, FL. season-opening class.

Ocala, FL. (January 18, 2013) – Since first appointed the Director of Flat Track for the AMA Pro Flat Track Grand National Series, Dan Johnsen has been looking to learn more about the sport even if it means throwing a leg over a bike and strapping on a steel shoe.  At the first RIDE Academy of the season in Ocala Florida, Dan will be doing just that!  He will be joining a sold out class where RIDE Academy will provide two days of training and instructing, both on and off the track.  Dan Johnsen will make the trip from the Daytona Beach, FL headquarters for the January 26/27 "RIDE Academy Ocala", presented by Metro Racing.

Dan will get the chance to ride and learn from AMA Pro Flat Track professionals: Johnny Lewis (National #10), Kenny Coolbeth (National #2) and former National #67 Mike Hacker.  The RIDE crew with also be bringing in two guest instructors, 2012 AMA Pro Singles race winners: Ryan Wells (94B) & Cody Johncox (96B).  Johnny Lewis stated in a conversation earlier this week, that he feels RIDE Academy is going to be able to show him (Dan Johnsen) the little things you can’t see by sitting in the stands or track side.  “The game is changing. From the bikes to the techniques of the riders, it’s not in a text book. 2013 is going to be a new chapter for AMA Pro Flat Track racing on many levels, and I feel Dan is taking the appropriate next steps to further his knowledge in the sport,” says Johnny Lewis.

It's not all business for Dan though.  He will be strapping on his helmet along with a steel shoe and is prepared to have some fun with the RIDE crew over the two days while seating up on one of the RIDE Academy CRF Honda training bikes.  RIDE starts the students off on their professionally prepared CRF Honda bikes, ranging from 50cc’s to 230cc’s.  They begin on a smaller course designed to allow the rider to progress faster than they would be able to riding at 100% performance on a full-size race bike.  Just like every other RIDE Academy Ocala student, Dan will then advance to the race bike on day 2 on a larger short track.  This will then lead into a full-size TT track for the last portion.

RIDE Academy Ocala, Florida is sold out but for more information on this school and other RIDE dates coming to a track near you, follow us on Facebook @ fb.me/rideacademytraining or at www.rideacademy.com.

Riding. Instruction. Determination. Excellence.
RIDE Academy is determined to change the world of flat track racing.  We believe we have a formula that will lead many riders to success.  We are here to extend our combined knowledge to fellow riders so that they can become the best they can be in a far less amount of time that it has taken each of us.

Taking a page from motorcycle history and providing it to the enthusiasts of the world.  Check out our website at www.metroracing.com where you can get all kinds of cool vintage motorcycle gear.  Buy our stuff and support our racing habit!