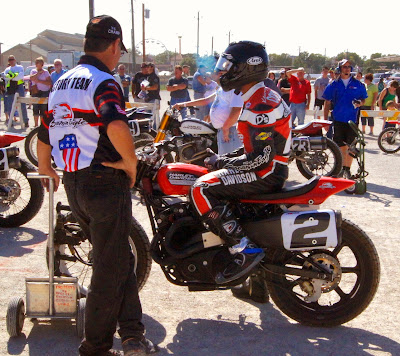 Round 10 of the 2012 AMA Pro Flat Track Harley-Davidson Insurance Grand National Championship presented by Motorcycle-Superstore.com season saw The Rolling Thunder Show share the limelight in Indianapolis with the 5th Annual Red Bull Indianapolis MotoGP circus in the return to the Lucas Oil Indy Mile at the Indiana State Fairgrounds on August 18.

Waiting for the final qualifying round while the Indiana State Fair activities are going on around the premises are Kenny Coolbeth, Sr. and his son, Kenny Coolbeth, Jr. on the #2 Screamin' Eagle/Harley-Davidson Motor Co/Fox/Arai Helmets-sponsored factory XR750, along with the rest of the top riders in the sport.

Coolbeth, the lone factory-supported rider and team in the sport, made his first return to the race track after having been out of action since the Lima Half-Mile on June 30 where he suffered a broken leg on the opening lap of the 25-lap National main, came back in a big way at Indy in qualifying in the 8th-place spot out of the 47 riders who took a timed lap.  The King of Cool then proceeded to finish in the 3rd-place spot in his heat race in order to qualify for the main event, where he eventually brought it home with a 5th-place finish for the evening in the 18-rider field.

Today, the Harley-Davidson Motor Company announced that they will be increasing their contingency awards in the upcoming AMA Grand National Twins Series Championship, doubling the payouts for anyone mounted on the company's tried and true XR750.  With all of the cutbacks in the sport over the last decade, this is one great announcement especially in lieu of all the support they have given the greatest racing series on wheels in the world over the course of the last 40+ years.

Riders aboard the company's long-standing weapon of choice in flat track will now be able to earn up to $4000 per win in each of the scheduled Twins Series events for the 2013 season.  Along with the extra millimeter in restrictor opening that the XR750 was given for the mile events for the upcoming season, and the minimum weight limits set on all Twins Series machines for this year, this should really help to keep more XRs on the grid for the foreseeable future.

Check out the official press release below to see what the payout schedule looks like, and you better be getting your XR ready to go come Springfield at the end of May!

MILWAUKEE, Wis. (January 29, 2013) – Harley-Davidson Motor Company is pleased to announce that it will double its contingency payouts to racers in the AMA Pro Grand National Twins class from $5,500 to $11,000 per race for the upcoming racing season.

To be eligible for Harley-Davidson contingency awards, riders must display the Harley-Davidson Bar & Shield logo prominently on their leathers either on the front chest or right ribcage area.

“Harley-Davidson’s support for dirt track racing goes deep into the roots of the sport and we are pleased to increase the financial reward for racers who proudly carry the Bar & Shield in AMA Pro Flat Track competition,” said Kris Schoonover, Harley-Davidson Racing Manager.

“AMA Pro Racing would like to thank the Harley-Davidson Motor Company for all of its support,” said Dan Johnsen, Director of AMA Pro Flat Track. “By increasing support for the riders that are bringing fans across the country such thrilling entertainment, Harley-Davidson is helping to ensure the future success of the sport. We are thankful and proud to have them as a partner.”