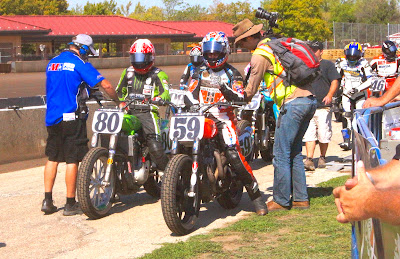 Round 13 of the 2012 AMA Pro Flat Track Harley-Davidson Insurance Grand National Championship presented by Motorcycle-Superstore.com season at the Springfield Mile II saw teams, riders and fans alike converge on the cathedral of speed, albeit a couple of weeks later than normal after the remnants of Hurricane Isaac caused the original Labor Day Weekend gathering to be canceled and rescheduled for the middle of September.  But once things got under way at the Illinois State Fairgrounds everyone was ready to go in what would be another great weekend of speed.

Just after the first round of practice, riders can be seen after pulling off of the track as they roll to a stop for the usual AMA Pro Flat Track inspection process to insure all is well under the tank.  Getting fuel samples tested by one of the AMA Pro Flat Track Blue Crew are Stevie Bonsey on the #80 Werner-Springsteen Racing/Alpinestars/Wossner Pistons/Cometic Gaskets-sponsored Kawasaki 650R and Willie McCoy on his #59 Harley-Davidson of Wausau/Independence H-D/Tucker Rocky/Arai-backed XR750.  JD Beach #95 and Kayl Kolkman #98 can be seen just behind Bonsey and McCoy while Will Fulford from The Fast and Dirty.com swaps out one of his GoPro cameras on McCoy's mount.

AMA Pro Flat Track released the new technical rules package for the upcoming 2013 season last night in an early move from what we have seen in the past few years.  This will surely help the teams to get a little bit of a jump on getting their set-ups ready for the new season ahead.  Some of the big changes anticipated and expected include a new minimum weight rule for the Twins Series (310 lbs. for ALL machines), and the addition of another millimeter in restrictor size (32mm to 33mm) for the H-D XR750s on the mile ovals.

Both of these should help keep all of the screaming at a dull roar in terms of equaling the competition across the board from the XR750 camps after the Kawasaki camp with rider Bryan Smith won the Sacto and Springfield II miles this last season.

Thanks to AMA Pro Flat Track for the newly released package, which you can view below.

The 2013 AMA Pro Flat Track Technical Rules have been released and are now available in the Competitor Information section of AMAProRacing.com. A direct link to the file follows: