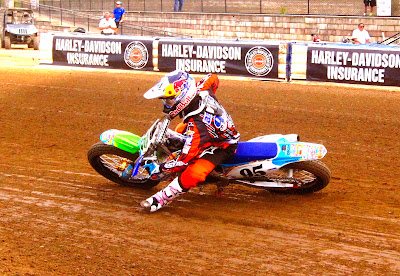 JD Beach on the #95 USC Racing/Red Bull/Barnett Farms/Bell Helmets-sponsored Kawasaki KX450F lays down a lap during one of the practice sessions at the Springfield Short Track on September 15 at round 12 of the 2012 AMA Pro Flat Track Harley-Davidson Insurance Grand National Championship presented by Motorcycle-Superstore.com season.

The part-time flat tracker had a weekend off from his duties in the AMA Pro Daytona SportBike Series and put it to good use in running the final National for the foreseeable future at the Multipurpose Arena on the Illinois State Fairgrounds.  Beach had a strong showing on the day after qualifying 7th out of the 48 riders on-hand to take a qualifying lap, and pulled off a solid 6th-place finish in the National main and backed that up with a 4th-place finish the next afternoon on the Springfield Mile.

Beach, who makes Philpot, Kentucky his home now, has again been contesting the AMA Indoor Series at the Southern Illinois Center in DuQuoin and is once again making it his personal stomping ground.  Of the three rounds and ten races he has contested thus far in the season, Beach has taken a whopping nine wins.

The series has been seeing a great turnout in terms of amateur and pro talent, and the confines of the Southern Illinois Center's layout and the great promotional and operations work done by the Steve Nace Racing crew has again made for some exceptional racing during the winter break.  Some of the other pros that have been contesting the indoor races so far include among others Jeffrey Carver, Jr. #23, Chad Cose #49 and Brandon Robinson #44.

There are several rounds yet to go with this weekend, December 8 & 9 hosting the next set of events.  You can check out more below from the official press release from the AMA and also see the promotional flyer for the year-end rounds that are scheduled for December 29 & 30.

"We're having a great series with competitive racing across the board, in both motorcycle and ATV competition.  These riders don't slow down when the outside temperatures drop," said promoter Steve Nace.   "There's a lot of exciting short-track and TT racing on the schedule through late February -- not to mention an indoor, heated facility to keep the fans nice and warm -- so come on out and catch some racing."
One of the tighter championship races is in the 250cc Modified class, where just 1 point separates class leader Kolby Carlile from Canandaigua, N.Y., and Jeffery Lowery from St. Louisville, Ohio. Carlile, who has performed better in the short-track events, has three wins to Lowery's two.

Lowery, however, leads the points in the 251-500cc DTX class and 450 Mod class, where Carlile is fourth in the points.

The Vet riders are also heating up the track. Shawn Granderson from Chandler, Ind., leads the Vet 30+ class and the Senior 40+ class, where Tim Trowbridge from Eau Claire, Mich., sits second in points. James Dean Faulkner from Simpson, Ill., with one short-track win, is keeping Granderson honest in the Vet 30+ class, while Trowbridge currently leads the points chase in the 50+ class.

The fastest racing on the track is the Open Pro-Am competition, which has included current dirt-track and roadracing stars, including JD Beach from Philpot, Ky.; Hayden Gillim from Philpot, Ky.; Chad Cose from Freemont, Calif.; JR Addison from Bucyrus, Ohio; and Jeffrey Carver from Alton, Ill. Addison and Carver are past winners of the AMA Dirt Track Horizon Award, presented to the amateur dirt-track racer poised for success in the pro ranks. Gillim has won the AMA Roadrace Horizon Award.

All racing takes place at the Du Quoin State Fairgrounds' Southern Illinois Center in Du Quoin, Ill. Gates open at 2 p.m., with practice beginning at 5 p.m. A pit pass is $15, while children 5 years old and younger get in free. Friday night practice is available from 6-9 p.m. for $25.


About the American Motorcyclist Association

Since 1924, the AMA has protected the future of motorcycling and promoted the motorcycle lifestyle. AMA members come from all walks of life, and they navigate many different routes on their journey to the same destination: freedom on two wheels. As the world's largest motorcycling rights organization, the AMA advocates for motorcyclists' interests in the halls of local, state and federal government, the committees of international governing organizations, and the court of public opinion. Through member clubs, promoters and partners, the AMA sanctions more motorsports competition and motorcycle recreational events than any other organization in the world. AMA members receive money-saving discounts from dozens of well-known suppliers of motorcycle services, gear and apparel, bike rental, transport, hotel stays and more. Through the AMA Motorcycle Hall of Fame, the AMA honors the heroes and the heritage of motorcycling for future generations.
For more information, please visit AmericanMotorcyclist.com.
2013 AMA Indoor Dirt Track National Championship Series flyer courtesy of Steve Nace Racing.  Rounds 5 & 6 will take place on Saturday, December 29 and Sunday, December 30, 2012 with a practice being offered on Friday night, December 28. 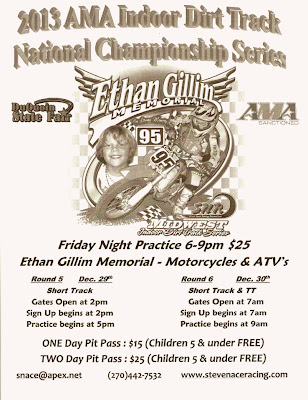