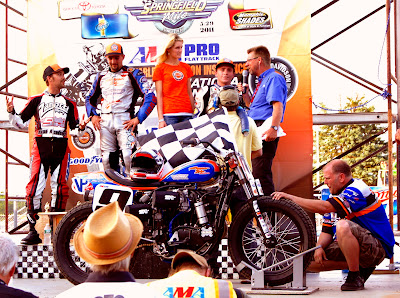 The three men who have dominated the last three seasons in the AMA Pro Flat Track Harley-Davidson Insurance Grand National Championship presented by Motorcycle-Superstore.com series stand atop the box after the running of the Springfield Mile I  on May 29, 2011.  Jared Mees had just won his first-ever mile event at the Illinois State Fairgrounds on the #9 Rogers Lake Racing/Blue Springs H-D/Lucas Oil/Saddlemen-sponsored XR750 over Jake Johnson and Sammy Halbert.

In the shot above from that great day, AMA Pro Flat Track announcer Barry Boone talks with 3rd-place finisher Slammin' Sammy as runner-up Jersey Jake and event winner Jammin' Jared discuss what really happened out their after 25-laps and Mees' tuner, Brent Armbruster, looks after the team's winning mount.

While Halbert would take the overall wins category for the last two seasons, Johnson and Mees would end up snaring the title in the '11 and '12 seasons, respectively, over the hard-charging Washington State resident.  Johnson added to his '10 title, while Mees took the overall honors this season in a year that saw more and rejuvenated innovations in The Rolling Thunder Show, which is expected to gain even more steam for the upcoming 2013 year.

Rumor has it that the 2013 schedule may include, again, a couple of previously-visited venues that weren't on the schedule in '12, and it was announced on Facebook today that the Pomona season-ending round will be making their official announcement soon as to when their event will take place next year.  And as has been the case for the last two years AMA Pro Flat Track is expected to announce the 2013 schedule sometime in the next 12-14 days +/-.

MavTV and AMA Pro Flat Track announced today that round 11 of the 2012 AMA Pro Flat Track Harley-Davidson Insurance Grand National Championship presented by Motorcycle-Superstore.com season at the Knoxville Half-Mile will be broadcast next Thursday, December 13.  See what the official press release has to say below and get your DVRs set as we all await the release of the new schedule and get ready to welcome Santa Claus into our homes in just 18 more days.