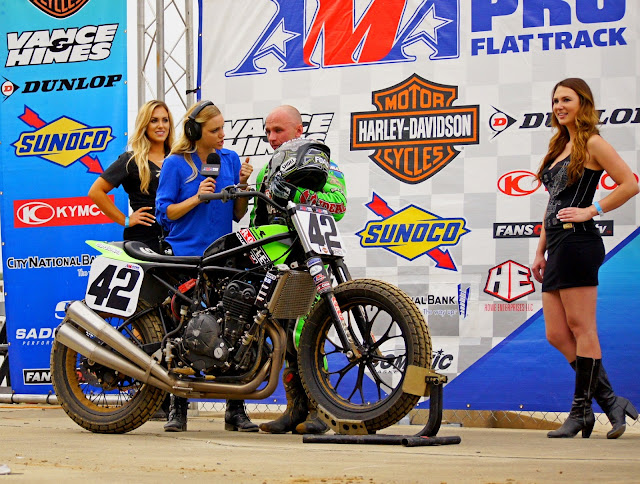 The AMA Pro Flat Track Grand National Championship Harley-Davidson GNC1 presented by Vance & Hines series returned to the Phoenix, AZ. area yesterday for the first time in 30 years and Bryan Smith put his name in the record books again by winning the first mile event of the year aboard the #42 Crosley Brands/T&T Construction/Howerton Motorsports Kawasaki over defending AMA Grand National Champion Jared Mees. Mees moved up to second-place in the championship standings with his 2nd-place effort at the Turf Paradise facility on the #1 Rogers Racing XR750.

Smith ran away in the 25-lap National main to take the win over The Jammer by just over 12.6 seconds, after earlier in the afternoon winning the fastest heat of the day in an 8-lap romp by just under 11 seconds to runner-up Brandon Robinson on the #44 Kennedy Racing XR.

Sammy Halbert continues to lead the series standings after coming home in the 5th-place spot in the main on the #69 BriggsAuto.com XR, while Jake Johnson brought the #5 Zanotti Racing XR750 effort home in 8th-place, which left him in the 3rd-place spot in the championship hunt after the first four rounds.

Smith and Mees were joined on the podium by Cory Texter who took his #65 CT Racing Kawasaki to his first-ever career podium in a stellar effort put in by the Pennsylvania resident.

In the shot above, Smith talks with AMA Pro Flat Track and FansChoice.tv announcer Dani Medin after winning heat race #2 on the #42 Crosley Brands/Howerton Motorsports/Villa-Esparza-sponsored Kawasaki at the Indy Mile during round 7 of the 2015 AMA Pro Flat Track Grand National Championship Harley-Davidson GNC1 presented by Vance & Hines series on July 11 held at the Indiana State Fairgrounds.

Also of note from yesterday's round, three racers made their first National main as GNC1/Expert-ranked riders and will be able to lose their letter designations for next year. JR Addison came home in 9th-place on the #24F Smith Racing Kawasaki, Dan Bromley on the #54A Bill Werner Racing Kawasaki fought it hard for an 11th-place finish in his second year riding for the Grand National tuning king, and Ryan Foster took the #23Y Baker Racing Kawasaki to a 13th-place finish. And in the AMA Pro GNC2 class, Dalton Gauthier led nine of twelve laps on the #14A Ron Wood Racing BMW FS800 to take his first win in the series and give the BMW marque it's first-ever win in AMA Pro Flat Track racing.

Full results from yesterday's romp can be found here thanks to AMA Pro Flat Track, and FlatTrakFotos.com's Dave Hoenig will have a photo gallery posted here in the next day or so.

Fans won't have to wait long for the next race as the series heads back to the Sacramento Mile this coming Saturday, May 21 for round 5 of the 2016 AMA Pro Flat Track Grand National Championship Harley-Davidson GNC1 presented by Vance & Hines season as Bryan Smith will try to make it two-straight in 2016 and six in-a-row at the Cal Expo-hosted Sacto event.

A full race report is below thanks to AMA Pro Flat Track.