AMA Pro Flat Track Grand National Championship Heads to the Springfield Mile I Memorial Day Weekend on Sunday, May 29 for Round 6 of the Season 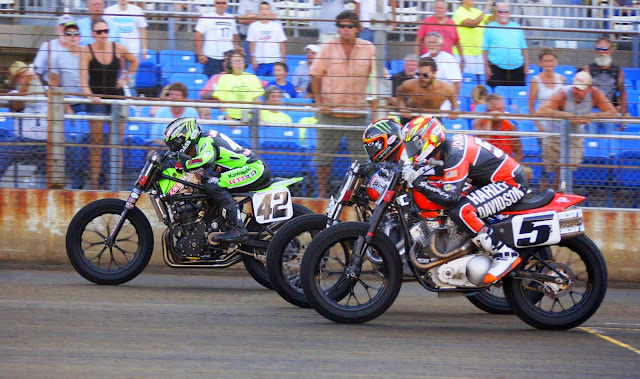 One of the premier events of the season will roll off the line in just shy of 24 hours as the stars of the AMA Pro Flat Track Grand National Championship Harley-Davidson GNC1 presented by Vance & Hines series heads to the grand daddy of them all at the Springfield Mile I tomorrow in round 6 of the 2016 season.

Unlike the last few years, the event that is the looked forward to most by nearly all fans and riders sits just shy of the half-way point of the season instead of three or four races into the schedule. With the series having completed not only both Daytona rounds, the series schedule has also hit the half-mile in Austin, TX. and both mile events in consecutive weekends prior to this at Phoenix, AZ. and Sacramento, CA.

This season has already been sizing itself up to be another barn burner with former 2-Time AMA Grand National Champion Jake Johnson having won one of the Daytona Short Track races (with Sammy Halbert claiming the other win), defending AMA Grand National Champion Jared Mees taking the win at the COTA/Austin half-mile, and mile specialist and Howerton Racing's rocket Kawasaki pilot Bryan Smith taking the wins at both the Phoenix and last weekend's Sacto Mile events.

Besides the great racing to look forward to tomorrow, Midwest fans will also get to catch a glimpse of the new Harley-Davidson XG750R being piloted by last year's AMA Pro GNC2 Champion Davis Fisher. Although the bike has struggled in it's first couple of outings, Fisher was finally able to put it into the National main last weekend in Sacramento and came away with a 16th-place finish. The Harley-Davidson folks are trumpeting this weekend's event as the bike's debut (see the press release below from the Motor Company) even though it has already appeared at the previous three rounds of the season.

In the shot above, Bryan Smith on the #42 Crosley Brands/Howerton Motorsports/Villa-Esparza-sponsored Kawasaki leads Jared Mees on the #1 Las Vegas H-D/Rogers Racing/Harley-Davidson Motor Co-backed XR750 and Jake Johnson on the #5 Harley-Davidson Motor Co/Screamin' Eagle Performance Parts/Arai Helmets-sponsored XR750 in the last few feet before the checkers is thrown at the running of the Springfield Mile II on September 6 during round 12 of the 2015 AMA Pro Flat Track Grand National Championship Harley-Davidson GNC1 presented by Vance & Hines series held at the Illinois State Fairgrounds.

Smith heads up the point standings over Sammy Halbert, Jake Johnson and Jared Mees (with just 17 points separating the top-4 riders after just five rounds) and is heading to familiar territory tomorrow in Springfield in a race that he won both times last season and has all but dominated since joining the Howerton Motorsports Kawasaki team in early 2012. There is no reason not to think that tomorrow won't be any different, although riders like Kenny Coolbeth, Jr. and Brandon Robinson have been able to sneak in wins amidst Flyin' Bryan's dominance on the Illinois State Fairgrounds mile oval. And as we all know, that is why we have races, in order to determine who can and will win them!

As we wish all of the men and women in The Rolling Thunder Show the best of luck for tomorrow's event, you can check out all of the particulars about the shoot-out in Central Illinois below thanks to AMA Pro Flat Track, and may the best man (or woman) win!

Sent on behalf of the Harley-Davidson Motor Company: