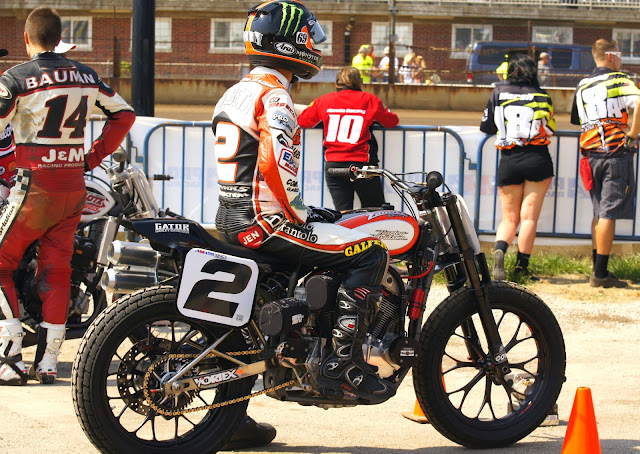 Round 13 of the 2015 AMA Pro Flat Track Grand National Championship Harley-Davidson GNC1 presented by Vance & Hines series hit the east coast last night, and former 3-Time AMA Grand National Champion Kenny Coolbeth, Jr. dominated the 25-lap National main to take the 35th win of his long and illustrious career in front of what was reported as a large crowd at the Delaware Half-Mile.

After qualifying in the 4th-place spot behind Jake Johnson, Dominic Collindres and Nichole Mees, the King of Cool was able to bring it home just behind series points leader Jared Mees in the first heat to qualify for the Dash for Cash, where he went on to turn the tables on The Jammer and take the win and the extra bonus point that goes along with it. Starting from the pole in the main, Coolbeth set sail during both portions of the red flag-delayed event (which saw Sammy Halbert crash out, mostly unhurt, but ruining his evening and his mark of all  top-9s on the season.)

In the end, Coolbeth took the win by just over 1.6 seconds over runner-up Jeffrey Carver, Jr. on the #23 Don's Kawasaki (in his best-ever Twins finish) and 3rd-place finisher Jake Johnson on the #5 factory H-D XR750 (and his second top-3 in-a-row.) Rounding out the top-5 was Collindres in another super solid run on the #66 Babe Demay-tuned Memphis Shades Yamaha and Rookie of the Year lock Jarod Vanderkooi on the #17F Don's Kawasaki (in his second top-5 and fourth top-10 of the season.)

In the shot above, Coolbeth is seen on the #2 Zanotti Racing/H-D Motor Co/Gator H-D-sponsored and Dave Atherton-tuned XR750 prior to the start of practice at round 12 of the 2015 AMA Pro Flat Track Grand National Championship Harley-Davidson GNC1 presented by Vance & Hines class at the Springfield Mile II on September 6.

Of note for last night's event, Nichole Mees in her last season of full-time racing crashed out in her heat on the #15 Black Hills H-D XR750 and suffered an eye socket fracture that will require some follow-up surgery, per her husband Jared's Facebook post from last night and today, and Mikey Martin suffered a crash during qualifying on the #91 Weirbach Racing Kawasaki that saw him beaten, banged up and sore, but apparently with no major serious injuries.

Title battle men Jared Mees on the #1 Rogers Racing XR and Bryan Smith on the #42 Howerton Motorsports Kawasaki both suffered from problems in Delaware during the National main. Mees jumped the start and was relegated to the fourth row for the start, as was Smith who was forced to the back due to having to roll out his back up for the main. In the end, Mees ended up in 8th-place in the final, and Smith ended the night in 14th-place after suffering more shifter-related problems during the race. They leave Delaware with Mees still back out front of the championship battle by seven points, 188-181 points.

A big congrats to Kenny Coolbeth on his great win last night, and to the rest of the great competitors in The Rolling Thunder Show for another fine show! 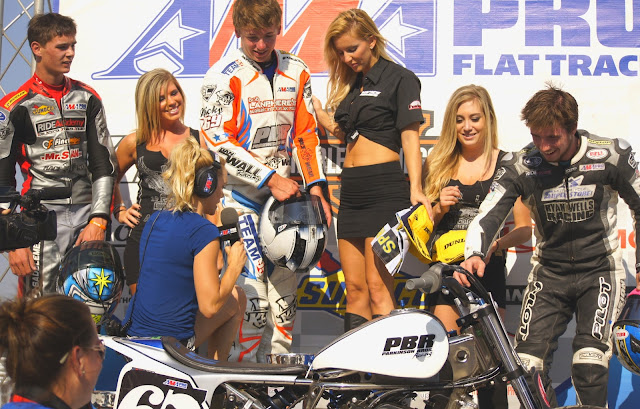 In the AMA Pro GNC2 race, Dashin' Davis Fisher took his fourth win of the season on the #67M Parkinson Brothers Kawasaki to wrap up the championship title in the class with two rounds remaining, and become the youngest winner of a Pro Singles/Twins/GNC2 championship since the class' inception in the 2009 season. Last night's win marked Fisher's fourth win of the season and ninth top-2 finish of the year.

In the shot above, Fisher is surrounded by the lovely ladies of Harley-Davidson and Vance & Hines racing getting ready to be interviewed on the podium by AMA Pro Flat Track and FansChoice.TV's Dani Medin after taking the win in the GNC2 class at the Springfield Mile II on the #67M Parkinson Brothers Racing/Racing Unlimited/Bob Lanphere's Beaverton Motorcycles-backed Kawasaki on September 6, 2015. Also celebrating are runner-up Tristan Avery #16S (L) and 3rd-place finisher Ryan Wells #94B (R.)

A big congrats to new champion Davis Fisher on his wrapping up of the title. Fisher, along with riders Bronson Bauman (2nd-place last night on the #30Z Lombardi's H-D XR) and Dan Bromley (3rd-place last night on the #54 Bill Werner Racing Kawasaki) along with Ryan Wells and several other great racers in the GNC2 class are living proof that the future of AMA Pro Flat Track's Rolling Thunder Show is in great shape as these fine young men work their way to the top of the ranks in the greatest racing series on two wheels in the world!


After last week's announcement that the Calistoga Half-Mile was to be postponed due to the devastation of the California wild fires that have created so much destruction and forced hundreds and possibly thousands not only out of but without their homes, the series awaits the word on when/if the race will be rescheduled. As it stands as of now, rescheduling is in the works, dependent obviously on Mother Nature and the ability to get the fires under control. Our thoughts and prayers go out to those who are going through the devastation out west and hope things get brought under control soon so everyone can get back to some semblance of normalcy in their lives.

Kenny Coolbeth Jr. wins wild GNC1 main at the Roar on the Shore