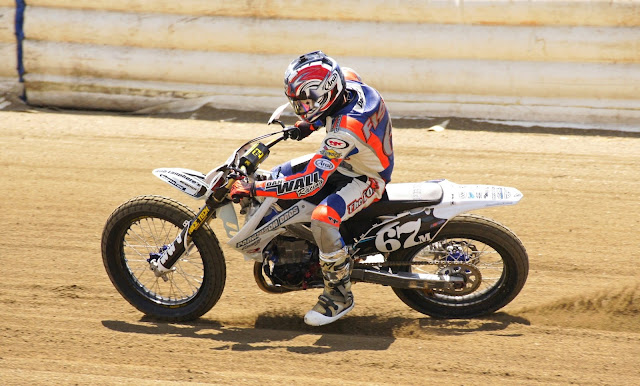 Davis Fisher has had an amazing run to his championship efforts in the 2015 AMA Pro GNC2 class aboard the Parkinson Brothers Racing mounts, wrapping up the series' title with two rounds still to go in the season (Calistoga Half-Mile/rescheduled date TBA soon, Las Vegas Short Track/November 20.)

After coming in second during the 2014 season to champion Kyle Johnson and missing a couple of rounds due to injuries suffered at the Indy Mile, Fisher was ready to go after the crown he nearly won in his first season in the series when then-team owner TJ Burnett decided to step away from competition for the season, instead concentrating on not only family matters but his health as well. Burnett was also left with machines ready to go for the new season built on what was supposed to have been the 2014 '650' platform as what the series ran in the Pro Twins class last year, when in early March the rules were amended to allow the GNC2 boys to run bikes built under the '750' platform as what was being fielded in the GNC1/Expert class.

So Oregon resident and fast kid on the prowl Fisher was able to hook up with the Parkinson Brothers Racing team, who had teamed with the Lloyd Brothers Motorsports team for the 2014 season in hopes of garnering a title for 2-Time AMA Grand National Champion Jake Johnson when Johnson wasn't aboard one of the LBM team's fast Ducatis, Kawasaki or XR750 which he had at his disposal for the Twins Series events.

As it turned out, the pairing of Fisher with the PBR team was a match made in heaven, while also utilizing some of Burnett's keen eye towards fast guys in the sport and the use of some of his equipment for back-up machines. With the GNC2 series split into Singles and Twins events, Davis had a wealth of solid equipment at his disposal, and even incorporated one of Allen Rodenborn's Racing Unlimited Kawasakis to win the first Springfield Mile event with in late May, which three events into the season was his first of four wins (so far!) on the season.

In the shot above, Fisher dazzles with his massive bike control efforts at the rough Lima Half-Mile on the #67M Parkinson Brothers Racing/Bob Lanphere's Beaverton Motorcycles/Dan Wall Racing-backed Honda CRF450R during qualifying at the Allen County Fairgrounds-hosted event on June 28 in round 5 of the 2015 AMA Pro Flat Track Grand National Championship season in the AMA Pro GNC2 class.

Of note--Lima was perhaps one of the races where Fisher really showed those on hand in the stands and at the track what he was truly capable of. During his qualifying heat race #2 in the early laps, coming out of turn 4 Fisher all but clipped a fence post on the outside edge of the track, causing him to slip back to the back of the pack. Gathering it back up and literally roaring back through the pack, Fisher had caught early leaders Andrew Luker and Ryan Wells, had gotten around them both, and sailed on to take the checkered flag to win in front of Wells by just over one second. It was an amazing display of talent and control, and at the time those who saw it first hand, like myself, knew right there and then that the future of AMA Pro Flat Track was looking pretty damn slick and fast and was in damn good hands! Fisher ended up finishing in 2nd-place in the junior league National that day behind winner JR Addison, but left with seven point lead in the championship standings in what could well have been a major deficit if not for his great control in turning it around in his heat race. 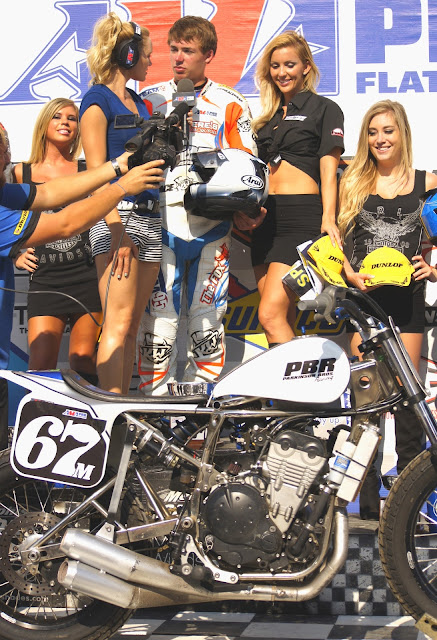 Fisher did have some rough results on the season, and thankfully for the rest of the series' combatants it kept them in the hunt right up until last weekend when he clinched the series championship at the Delaware Half-Mile on September 19. At Daytona I (13th-place), the Sacto Mile (17th-place) and Indy (15th-place) the youngster from the Great Northwest Territory showed that he is actually human and that the other title contenders in other young hot shoes like JR Addison, Bronson Bauman, Wells and Dan Bromley might have a shot at the title. Unfortunately for them, the other nine rounds Fisher finished he either won or came in as the runner-up.

In the shot above, Fisher is interviewed by AMA Pro Flat Track and FansChoice.TV's Dani Medin during the podium ceremonies after he took the win at the Springfield Mile II aboard the #67M Parkinson Brothers Racing/Bob Lanphere's Beaverton Motorcycles/Dan Wall Racing-backed Kawasaki in the GNC2 final on September 6.

With now just the final two rounds remaining, the young speedster could sit back on his laurels and get ready for his jump to the GNC1 class for the 2016 season in The Rolling Thunder Show. But I wouldn't expect that, nor should anyone else, even with a 60-point championship battle already in his back pocket and the lure of the big boys ahead in the greatest racing series on two wheels in the world.

Congrats to a very worthy champion in young Mr. Davis, for wowing us and showing us that the future of AMA Pro Flat Track is indeed in good hands. Great job man!