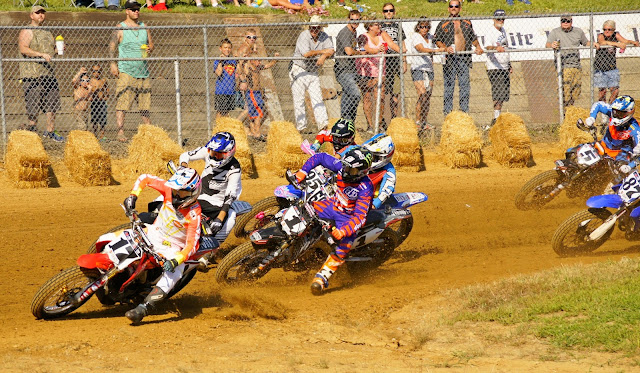 Henry Wiles made another mark in the history books yesterday by taking his 11th-straight win at the Peoria TT in round 10 of the 2015 AMA Pro Flat Track Grand National Championship Harley-Davidson GNC1 presented by Vance & Hines Series. Although things didn't go completely his way throughout the day (Wiles qualifying effort of just over .2 second behind fast qualifier Jared Mees was pretty much his only missive), The Hammer did what he had to do the rest of the day to round out another golden day in Thunder Valley by winning the Dash and taking the win in the National main by just over 1.3 seconds over defending champ Mees.

Above, Wiles on the #17 Zanotti Racing/Motion Pro/Bell Helmets-sponsored Honda CRF450R got the jump on the field on the first lap and led all going into turn 1. From that point on, Mees never got closer then .054 seconds (lap 16 of the 25-lap main) and Wiles was able to stretch his lead through traffic to 1.342 seconds at the end of the day.

Also hot on Wiles' heels is Briar Bauman #14 (see more below), Mees #1 and Sammy Halbert #69 on his Fredericktown Yamaha/Van's Yamaha/Kibblewhite-sponsored YZ450F. Halbert (repping his late brother Jethro's National #69 instead of his usual #7) ended the day in 9th-place, still keeping a stranglehold on the 3rd-place spot in the championship and keeping his string of top-10s on the season intact. Also behind these riders is Jake Johnson #5 (also more below) and partially in the shot Mick Kirkness on the #87 Goeken Racing/Chisum Racing/Ipone Oil-sponsored Yamaha. Kirkness finished the day in 7th-place, the last rider to be lapped by the lead finishing duo of Wiles and Mees. 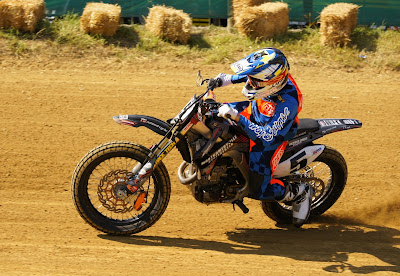 2010-2011 AMA Grand National Champion Jake Johnson returned to action for the first time since the Daytona doubleheader season-opening rounds, compliments of a ride on one of Mees' spare Montgomeryville Cycle Center Honda's. Johnson qualified 8th out of the 25 GNC1/Experts on hand, but made a rare mistake during his heat and dropped the bike and was forced to ride the semi in order to make the main.

Johnson got a slow start in the semi on the #5 Montgomerville Cycle Center/JM9/Ramspur Winery-backed Honda, but within a couple of laps had taken off to go on to take the win to punch his card to the National. Starting on the back row, Johnson got an incredible start and was in the top-7 by the time the field hit turn 1 in Thunder Valley (see shot above.) He went on to finish in the 6th-place spot, the last rider on the lead lap and will surely end up being the MotoBatt Hard Charger for the event. 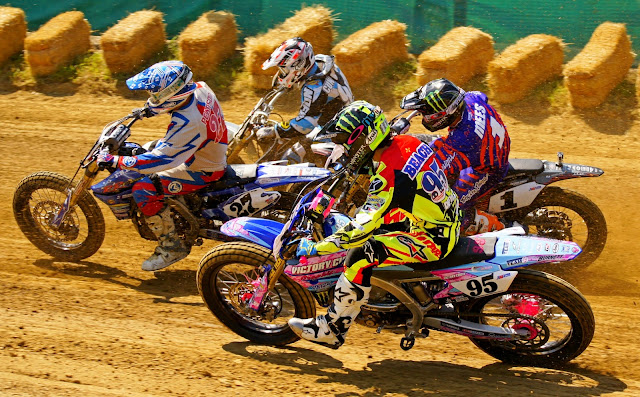 JD Beach, fresh off clinching the MotoAmerica SuperSport title in Indianapolis the weekend before, came ready to race with his #95 Yamaha USA/Victory Circle Graphics/Team 95-backed Yamaha YZ450F and was on fire throughout the day running in the top-5. The part time dirt tracker brought it home in 4th-place. Above he battles with local boy Rob Pearson on the #27 R&R Racing/Country Saloon/Clipper Industries-backed Yamaha, defending champ Jared Mees on the #1 Montgomeryville Cycle Center/Rogers Racing/SDI-sponsored Honda and Jake Cunningham on the #94K Best Exteriors/Arai Helmets/Motion Pro-sponsored Yamaha during their heat race. 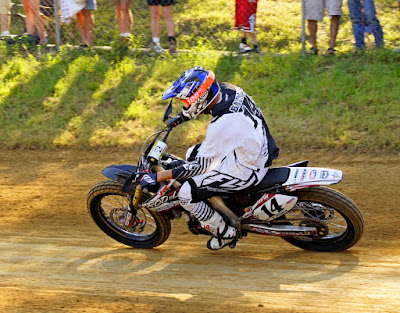 Briar Bauman extended his strong season run of top-5 finishes with another 5th-place on the #14 Rod Lake Racing/Drew-Massa Transportation/Arai-backed Honda. Bauman qualified 4th on the day and also brought home a 3rd-place finish in the Dash thanks to his solid 2nd-place run in his heat, and continues his move towards the top-5 in points. His 5th-place at Peoria was his fourth top-5 of the year, and his third top-5 in the last six races (Lima & Black Hills 3rd-place.) 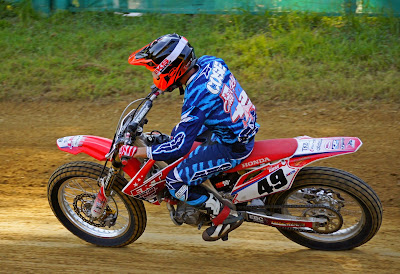 Chad Cose has had some tough mechanical luck this year with the Myers Motorsports team Kawasakis, but not for lack of trying. With the Myers team getting ready for the next Twins round in Charlotte on August 29, Cose was at the ready in Thunder Valley on the #49 ERT/Rod Lake/Nazzissi Racing-sponsored Honda. Qualifying 10th out of the 25 GNC1 riders who took a timed lap, The Cali Kid fought hard for his 3rd-place finish in his heat, which put him in the Dash (with only two heats running on the day, the top-3 from each heat went to the Dash for Cash bonus race.) Finishing in 6th-place, the likeable Californian readied himself for the main, and ready he was, fighting it out throughout the day to bring home a very solid 8th-place finish, for his second top-10 on the year (9th-place Daytona II.) 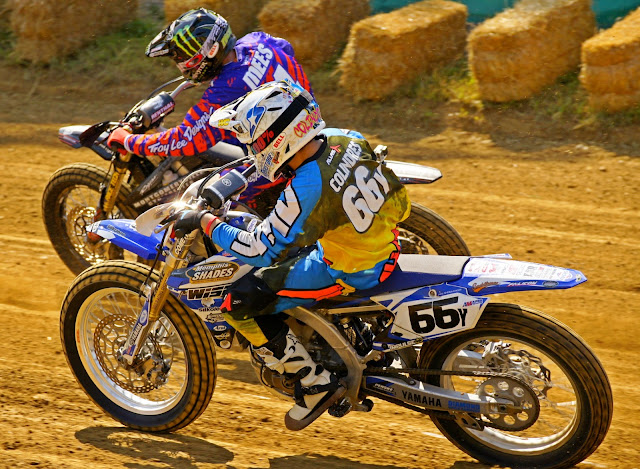 The surprise and breakout performance of the day went to rookie Dominic Collindres on the #66Y Babe Demay/Memphis Shades/Yamaha-sponsored YZ450F. The former winner in the Pro Singles class in 2012 while riding for the Weirbach Racing team, Collindres, in only his third GNC1 event, won his heat over defending champ Mees (above battling it out again in the Dash) and then nailing down 4th-place in the Dash. In the main, the Californian had a clear advantage over 4th-place finisher Beach to get his very first podium spot in his young but bright career. A great show by this fine young man after earlier in the season being the first to put the new Yamaha FZ07 twin in a main at Lima. Great job! 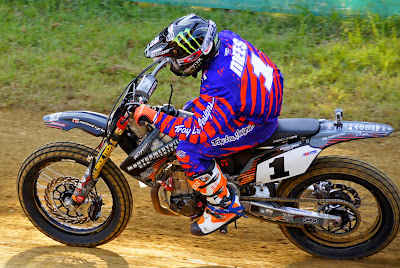 Mees did all he could all day long to try and keep Wiles within striking distance, but after 25-laps not even the tough-as-nails Michigan resident could haul in his fellow Michigan man. Mees was fast qualifier on the day on the #1 Montgomeryville Cycle Center Honda, and tried his best to catch not only Collindres in their heat, but Wiles in the main. He was able to leave Peoria with some solace, however, as he extended his lead in the championship to 29 points over Bryan Smith (11th on the day) 156-127 points with five rounds remaining on the season. 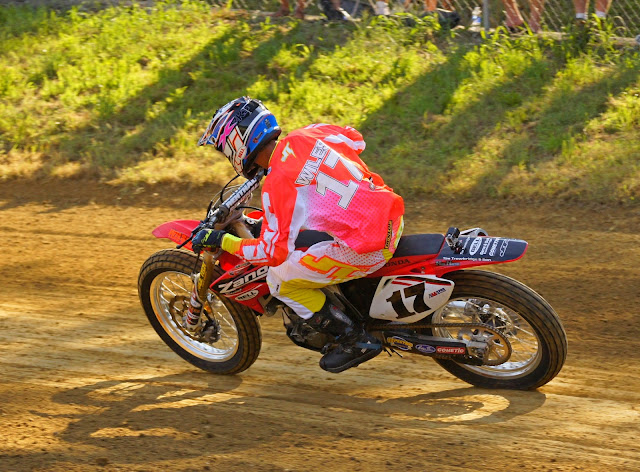 In the end, it was all Henry on the #17 Zanotti Racing Honda, winning what could very likely be the last Singles Series race at the fabled facility, what with the talk of the Twins taking over completely for next season. Wiles moved into the all-time TT win list with his 16th win on a TT course (Chris Carr still lies in 2nd with 15 wins) and will need two more wins to equal Carr's overall win total of 13 on Cameron Lane in Peoria.

You can view the full results here thanks to AMA Pro Flat Track, and a big thanks goes to my traveling companion and host Larry Lawrence for this article in Cycle News about yesterday's romp in the Valley.

The series now takes a weekend break before heading to Charlotte, NC on August 29 for another new event on the 2015 series calendar.