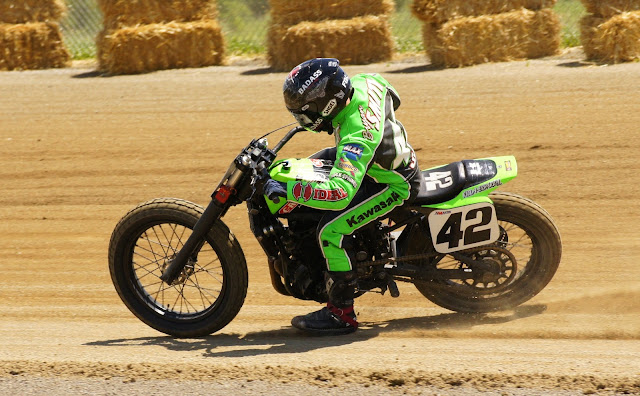 Championship points leader Jared Mees was dealt a blow to his huge 29-point championship lead heading into round 10 of the AMA Pro Flat Track Grand National Championship Harley-Davidson presented by Vance & Hines event when he suffered a mechanical on the penultimate lap of the main, dropping him to 17th-place in the final tally. Mees now leads Smith in the hunt for the 2015 AMA Grand National Championship battle 158-152 points, just six slim points separating the two Michigan rivals with just four round remaining on the season.

In the shot above, Smith puts the #42 Crosley Brands/Howerton Motorsports/Villa-Esparza/Kawasaki-backed EX650-based 750 through it's paces during the second qualifying round at the Lima Half-Mile on June 28, 2015.

Lima was where Mees had taken over the championship lead over early-season leader Kenny Coolbeth, Jr. and had most recently extended that lead at the Peoria TT two weeks ago with a stellar run to 2nd-place over 11-time Peoria champ Henry Wiles, while Smith was relegated to an 11th-place finish in Thunder Valley.

Coolbeth finished in 2nd-place on the night on the #2 Zanotti Racing XR750 at Charlotte, with Sammy Halbert, still wearing the #69 in honor of his recently departed brother, Jethro, rounding out the podium for 3rd-place on the BriggsAuto.com XR. Halbert kept his streak of being the only rider to finish inside the top-10 all season with his run from a 13th-place starting spot on the grid from the third row to his 3rd-place finish, and he stands third in the championship battle with 140 points, 12 in arrears of Smith.

Of note was Henry Wiles on the #17 Zanotti Racing entry. After finishing in the 5th-place spot in the first heat, The Hammer was forced to race semi race #1 in order to qualify for the main and keep his 8th-place spot in the championship standings intact. However, a finish of 6th-place in the semi would have kept him out of the main if not for use of his Twins provisional on the year. Starting from the fourth row in the 19th spot, Wiles carved his way through traffic during the 25-lap National main and wound up finishing in the 7th-place position on the evening, surely earning himself the MotoBatt Hard Charger Award and also putting on one heckuva show for the fans in attendance and watching online via FansChoice.TV. Great run Henry!

Brandon Robinson took the #44 Castrol/Triumph Bonneville to a 4th-place finish, his best effort since his near win and 2nd-place finish at the Sacto Mile in late May, and Rookie of the Year contender/lock Jarod Vanderkooi, riding the #17F Don's Kawasaki, rounded out the top-5 and also earned himself his best finish of the season at the Charlotte Motor Speedway facility with his second top-10 of the year.

Next Sunday the series heads to the Illinois State Fairgrounds for the Labor Day Weekend running of the Springfield Mile II on September 6, the final Midwest round of the year before the series wraps up in Delaware, Calistoga and Las Vegas.

Check out the full press release below thanks to AMA Pro Flat Track, and be sure to keep tuned into the great action in The Rolling Thunder Show as the last four rounds of the year are guaranteed to make for a great horse race between the championship contenders. The greatest racing series on two wheels in the world never disappoints and it will surely only get hotter and faster in the coming rounds!