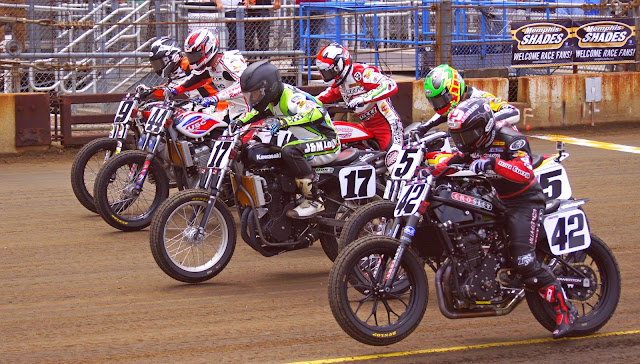 In less then seven days, the bulk of the 2015 AMA Pro Flat Track Grand National Championship season kicks off at the Memorial Day weekend running of the Springfield Mile I on Sunday, May 24. But the big question on everyone's mind out west now is whether anyone can bust the streak that Bryan Smith has going at the next round on Saturday, May 30 at the Sacramento Mile.

Springfield is known as not only the fastest circuit on the series' calendar, but arguably the most popular as well. At least for the majority of fans residing in or near the iconic mecca of speed located at the Illinois State Fairgrounds mile oval. But if you're from the Left Coast, Sacramento's version of the run for the money at the Cal-Expo Fairgrounds located at the California Capitol is also a very popular place. Having hosted what will be 50 editions of this great race, The Rolling Thunder Show's trek west will not only make it five decades of racing out west, but will also conjure up the big gamble to many as to whether there is another rider in competition today who can dethrone Bryan Smith's #42 from the top of the box at the end of what will be a very long day for some in Sacto.

As is widely known, Smith has reset the bar in terms of wins at Cal-Expo, starting during the 2011 season while riding his father's Moroney's Harley-Davidson XR750 to his first of four-straight wins. Since that time, on somewhat similar Villa-Esparza/Howerton Motorsports & Products/Crosley Radio-sponsored Kawasakis. And although those wins didn't come easy for the Michigan born and bred rider, his streak may leave another thought about the ease of those wins just looking at the final tallies over the course of the last four seasons. But is this the year that someone else steps up to take away that streak?

In the shot above, riders rocket off the line in the Dash for Cash event at the Springfield Mile I round on May 25 during the 2014 AMA Pro Flat Track Grand National Championship's stop over the Memorial Day weekend hosting of the great American race in the Illinois State Capitol.

After next Sunday's running of Springfield, the troops in the greatest racing series on two wheels in the world will pack up and head west for the quick turnaround to do battle at the Sacramento Mile, and all of those men pictured above and several other contenders in this year's championship will do their best to keep Flyin' Bryan from making it five-straight.

Check out the full release below thanks to SMI as we all get ready to rumble and watch what great action there is to come in the next 13 days that will kick off the bulk of what will surely be a bar banging action packed season in the AMA Pro Flat Track Grand National Championship.

Press release courtesy of SMI Promotions, the promoters of the Sacramento Mile.

Reviewing the Riders Who May Have the Best Chance to Break Bryan Smith’s Sacto Mile Win Streak
SACRAMENTO, Calif. (May 15, 2015) – When riders line up for the start of the 50th running of the Sacramento Mile on Saturday, May 30, there will be only one among the field who has won the Sacramento Mile Grand National and that’s Villa-Esparza/Crosley Radio Kawasaki’s Bryan Smith. Last summer Smith continued his dominance on the historic Cal Expo track by earning his fourth-consecutive victory. This year Smith, now with factory backing from Kawasaki, could be considered even more of an odds-on favorite than he was before, if that’s possible. Yet a slew of other top GNC1 riders will be looking to dethrone Smith from atop the Sacto Mile podium when they take the green flag for this year’s event.
Perhaps chief among those challengers will be defending AMA Pro Grand National Champion Jared Mees, of Clio, Michigan. Mees will be sporting the No. 1 on his Rogers Racing Harley-Davidson and he’s known to be a leading contender week in and week out, no matter the track. He comes into Sacramento this year with a solid record at Cal Expo, having scored podium finishes three-straight times, including runner up to Smith in 2013. 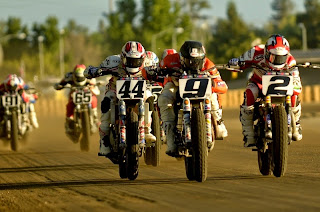 Brandon Robinson (44), Jared Mees (9) and Kenny Coolbeth (2) are three of the top riders who hope to break Bryan Smith’s four-race winning streak at the Sacramento Mile on Saturday, May 30 at Cal Expo. (Photo by Dave Hoenig/AMA Pro Racing)

When asked what it might take to beat Smith at Sacramento, Mees joked, “I think taking him out in the first corner.” And then he continued, “Bryan’s always strong there, but I think he can be beat. I had a shot last year, but we had a small issue with the adjustment on my clutch. I’m not saying that would have made the difference, but we were close.
“I think it’s going to take hanging in there with him and then trying to lead him going into turn three and just cutting a good corner. His bike is fast, but if you can have a big enough of a lead coming out of the last turn you might be able to hold him off. I’m sure Kenny Tolbert (Mees’ mechanic) is thinking of some ways to give me an even stronger bike this year, so I’m looking forward to seeing what we can do.”
Veteran Kenny Coolbeth Jr., has the know-how to get a victory at Sacramento. He’s the winningest active rider in the series, leads the current point standings and although the Mile at Cal Expo has not been his strongest track, he’s riding a proven winner in the always powerful Zanotti Racing Harley-Davidson. There’s also factory Harley-Davidson rider Brad Baker, who is looking to rebound after winning the national title in 2013 and then suffering through an injury-plagued 2014.
The wildcard is new Lloyd Brothers Motorsports Ducati rider Troy Bayliss. Bayliss is a three-time World Superbike Champion and former MotoGP winner who is attempting to make a run in select AMA Pro Grand National races, including Sacramento. A well respected flat track racer in his native Australia, going up against the top flat trackers in America, the birthplace of this form of motorcycle racing, is a tall task for anyone, even for a rider with the amazing racing credentials of Bayliss. If Bayliss could somehow break through and win at Sacramento it would be one of the biggest stories in the 61-year history of AMA Grand National racing.
Then there are riders like Brandson Robinson, who was third at Sacto in 2013, the always speedy Sammy Halbert, along with local favorites Stevie Bonsey and Briar Bauman (both of Salinas, Calif.), who could break through with a Cal Expo victory in 2015.
Whatever the case, any rider who is going to beat Bryan Smith at one of his favorite tracks is going to have to have a strong machine and be at their very best as well.
The AMA Pro Grand National Championship series is one of the longest running motorcycle racing championships in the world. On the long straights of the Sacramento Mile top speeds can reach 130 miles per hour. Flat track racing has produced many of America’s Motorcycle Grand Prix Champions such as Kenny Roberts, Eddie Lawson, Wayne Rainey, Kenny Roberts, Jr. and Nicky Hayden. Visit www.sactomile.com to keep up with all the latest on the event.
Practice for the 50th Sacramento Mile begins on Saturday, May 30 at 2:00 p.m. and opening ceremonies for the evening program kick off at 6:00 p.m.
Visit us at: http://www.sactomile.com/
Via Facebook: https://www.facebook.com/SactoMile
Twitter: https://twitter.com/sactomile
YouTube: http://www.youtube.com/user/sactomile
---
*** 2015 Ticket Information: Ticket information is available for the May 30, 2015 Sacramento Mile at www.sactomile.com.
Fans can order tickets online  at https://secure.interactiveticketing.com/b/ae283e, by calling 1-844 SAC MILE (1-844- 722-6453).
Tickets for groups of 20 or more also are available. Contact the Cal Expo Group Sales Department at boxoffice@calexpo.com for more information.