Motorcycle Hall of Famer Jim Rice Named Sacramento Mile Grand Marshal
SACRAMENTO (May 20, 2015) – Jim Rice, the Motorcycle Hall of Famer from Northern California, has been named Grand Marshal for the 50th running of the Sacramento Mile, which takes place May 30, 2015 at Cal Expo. Rice, who perhaps is best known for a hard crash he suffered into the outside fence at the Sacramento Mile that was captured on film and featured in the iconic movie On Any Sunday, was one of the top motorcycle racers in America in the late 1960s and early ‘70s.
Rice was inducted into the Motorcycle Hall of Fame in 2001.
“Jim is true legend here in Northern California and across the country for his racing accomplishments,” said SMI’s Steve McLaughlin. “We’re happy he’s letting us honor him as Grand Marshal and allowing our fans to show him their appreciation for all he did during his career.”
Rice was a leading AMA Grand National racer during an especially memorable period of the series. During his six-year professional racing career, Rice scored 12 AMA national wins. He won on mile, half-mile and TT circuits. All but one of his victories came on BSA motorcycles.
Rice was a championship contender for most of his career. He scored a series-leading six national wins in 1970, but came up just short in the final standings, finishing second to Gene Romero in that year’s championship. That season was famously chronicled by the movie On Any Sunday and showed a brutal crash Rice suffered at the Sacramento Mile that may have cost him that year’s title.
Chuck Palmgren immediately shut off the throttle on his bike upon taking the checkered flag in his heat race. Rice, who was inches behind Palmgren, wasn’t expecting the abrupt slow down and had to veer to the right to avoid hitting Palmgren.

Rice clipped the gearshift and put it into a false neutral. He tried desperately to put it back into gear and slow it down with the rear brake at the same time. At the last second, Rice found he was approaching the turn way too fast and he slid down and crashed into the outside barrier with the motorcycle flying up into a photographer who was taking photos of the crash. 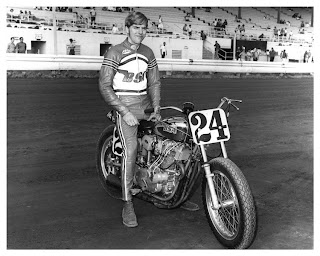 Photo courtesy of the Sacramento Mile, by Dan Mahony.

Rice, battered and bleeding from a broken nose, was taped up and bravely raced in the Sacramento final, but was only able to finish 15th, while Romero won the race. It was a major turning point in the season and Romero went on to win the championship over Rice.
“As a racer you do what you’ve got to do,” Rice said of riding in spite of his dire condition back in the 1970 Sacto Mile. “I was doing everything I could to reach my dream of being number one. To this day people love to talk to me about that part of On Any Sunday.
“I’m looking forward to coming to the Sacramento Mile. It’s an honor to be asked to be Grand Marshal of such an historic event and I look forward to talking with the fans and sitting right there with them to watch some great racing.”
The AMA Pro Grand National Championship series is one of the longest running motorcycle racing championships in the world. On the long straights of the Sacramento Mile top speeds can reach 130 miles per hour. Flat track racing has produced many of America’s Motorcycle Grand Prix Champions such as Kenny Roberts, Eddie Lawson, Wayne Rainey, Kenny Roberts, Jr. and Nicky Hayden. Visit www.sactomile.com to keep up with all the latest on the event.
Practice for the 50th Sacramento Mile begins on Saturday, May 30 at 2:00 p.m. and opening ceremonies for the evening program kick off at 6:00 p.m.
Visit us at: http://www.sactomile.com/
Via Facebook: https://www.facebook.com/SactoMile
Twitter: https://twitter.com/sactomile
YouTube: http://www.youtube.com/user/sactomile
---
*** 2015 Ticket Information: Ticket information is available for the May 30, 2015 Sacramento Mile at www.sactomile.com.
Fans can order tickets online  at https://secure.interactiveticketing.com/b/ae283e, by calling 1-844 SAC MILE (1-844- 722-6453).
Tickets for groups of 20 or more also are available. Contact the Cal Expo Group Sales Department at boxoffice@calexpo.com for more information.